LED technology is ubiquitous in the automotive industry, used for everything from headlamps to cabin backlight panels. Some automotive LED applications such as blinker signals are very space-constrained because of a fixed form factor. As a result, simple devices with a lower pin count and smaller size are required. But as these systems are still connected to the car battery, they must be capable of higher voltages to withstand load dump. Finding buck converters with 40V capability, good performance and very small size can be difficult. The LMR14006 is a new device from the SIMPLE SWITCHER® family of buck converters that is a good fit for blinker/turn-signal applications, rated for 40V and 600mA.

A voltage regulator like the LMR14006 operates on the peak current-mode principle. Since automotive designs have strict electromagnetic interference (EMI) requirements, a DC/DC regulator with fixed frequency makes EMI mitigation easier. The LMR14006 has a 2.1MHz switching-frequency option that makes component sizes smaller and also helps keep the switching noise out of the AM band. The LMR14006 also has a very low bill-of-materials (BOM) count, which simplifies its design.

The LMR14006 has an SHDN pin, which when pulled low disables the device and when pulled above 2.1V enables the device. To blink the LEDs, you simply feed a pulsing waveform of the required threshold values to the SHDN pin. You can also achieve the same results by toggling the VIN pin. But as the VIN pin is the power input to the regulator, toggling the VIN pin means that the input current to the IC is also switching on and off. This can cause issues if the board layout is not optimal because of the limiting form factor of the blinker, such as large voltage spikes at the input. Sustained large spikes at the input can cause damage to the IC and/or instability in the device’s regular operation; suppressing these spikes may require additional circuitry. Meanwhile, the SHDN pin sees no significant current and toggling it on/off would not cause any problems related to voltage spikes. Figure 1 shows the LMR14006 in an LED blinker application. 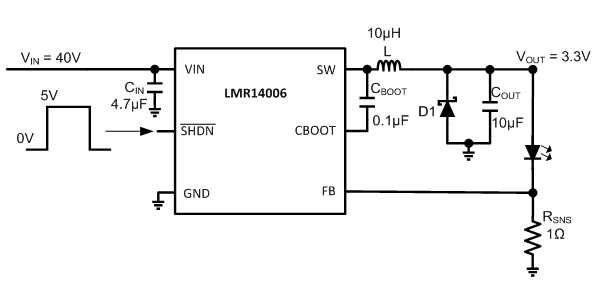 Therefore, a lower reference voltage would result in lower power dissipated in the sense resistor, ultimately resulting in higher efficiency.

Thus, for simple LED blinker applications, low-pin, low-BOM-count SIMPLE SWITCHER buck regulators are beneficial. Devices such as the LMR14006 and LMR16006 are small in size, high in efficiency and have a low component count. If you require an AEC-Q100 qualified device, the LMR16006Y-Q1 is a pin- and footprint-compatible alternative to the LMR14006.