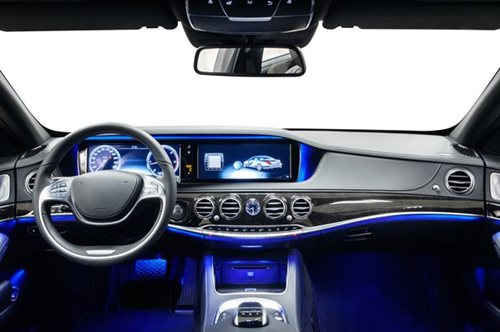 In a world of always-on experiences, drivers and passengers are looking to access real-time information about traffic conditions and potential hazards via traditional radio or human machine interface (HMI) systems.  At the same time, drivers and passengers want to use connected devices like GPSs, smartphones and tablets without interference.  Thus, it is important that these devices are not affected by electromagnetic interference (EMI), which occurs when placing a large amount of electrical and electronic systems in a confined space.

EMI compliance is an important topic for many major automotive manufacturers trying to build the newest systems for cars. Requirements are stringent and manufacturers must comply with standards like CISPR 25 Class 5 and in many cases if the standard is not met, then the system cannot be sold.

The level of EMI measurement in a system is subject to an engineer’s attention mostly in the later stages of design and validation. In many cases, the engineer discovers EMI problems when the board is assembled, after all components are chosen and validated separately. At this point it is very difficult to identify the exact source of EMI since the number of switching regulators has grown exponentially in today’s advanced automotive systems. For this reason, EMI test results utilizing a reference design board is useful for the engineer to get firsthand knowledge how the different parts work with each other once assembled together on the PCB board.

There are four major blocks in the reference design:

Figure 2 shows test results for up to 30MHz of conducted emissions – peak and average detection – using all of the DC/DC switching regulators with a full load. 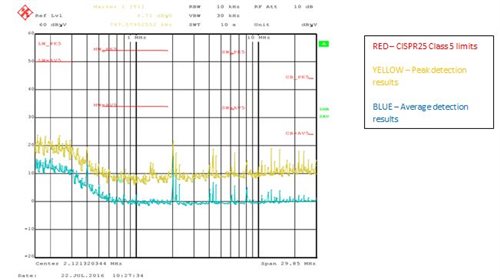 Figure 3 shows the test results for 30MHz to 108MHz of conducted emissions with the same conditions. 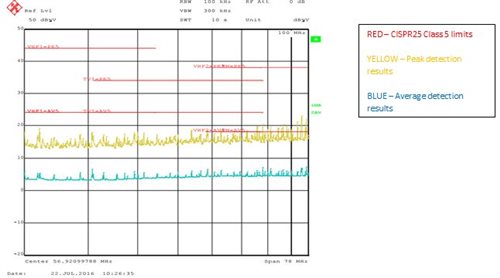 A reference design is a useful tool for an engineer to review EMI results and identify possible interference problems early in the design cycle. Measuring conducted EMI on a reference design board can help to identify noise trends and early compliance issues that might not appear until the final product design. Download the 17W System-Level Power Reference Design for Automotive Infotainment Processor Power reference design or get more information on TI’s power products for automotive applications.