LEDs were initially limited to a few niche applications. They didn’t enter the mainstream general lighting market until recently, given the confluence of a variety of technologies, better manufacturing techniques and cost optimization. The global market is still in the developing phase, with the automotive and smartphone markets providing a strong boost to LED market growth. Yet challenges remain related to the investment costs of replacing conventional lighting, which hinders the pace of the market. See Figure 1.

Automotive designers are moving away from standard bulbs in favor of LED arrays, which offer the ability to style the lighting differently and cater to advanced features like beamforming and even mood lighting.

Implementing LEDs in an automotive system is not a simple matter, however. LEDs by their very nature have unique needs, and automotive systems behave erratically under conditions like cold cranking and load dumps. They are also susceptible to noise – either generated by the lighting or the lighting affecting external noise. As I said earlier, there’s often pressure to optimize cost as well as thermals, as any power losses will translate to heat generation and ultimately reliability issues in extended usage.

TI has developed several reference designs to overcome these issues. For example, the TI Designs 24W Boost and Boost-to-Battery Reference Design for Automotive LED (TIDA-01234) in figure 2 is a 24W, high-efficiency (94%), low-cost, asynchronous boost design for automotive LED applications based on the LM3481-Q1.

This reference design applies to automotive high-brightness lighting such as headlights, taillights and interior LED lighting systems. It is designed to operate with an input range from 6VIN to 18VIN and can drive multiple strings of six to seven LEDs (16V to 24V) in series at a 1A constant current. While optimized for typical operating conditions, the design will also operate down to 3VIN for cold-crank conditions and up to 42VIN for load-dump conditions. The design supports analog LED brightness control and output open protection. In a boost-to-battery configuration, the input voltage can either be higher, lower or equal to the required LED strings voltage. See Figure 3. 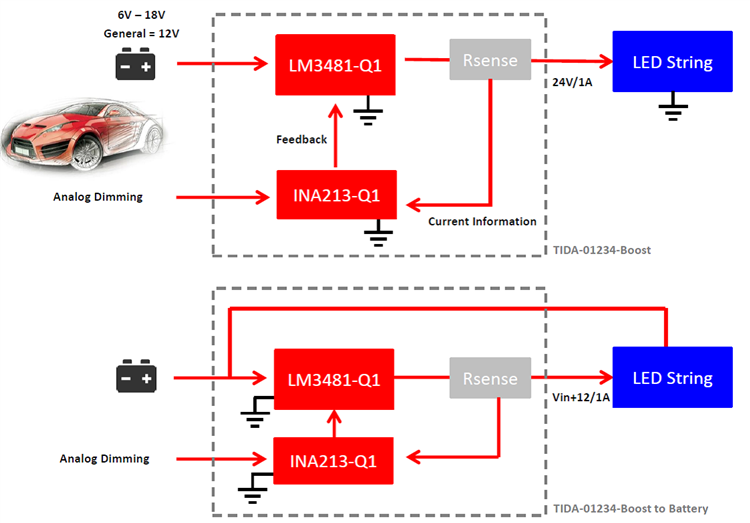 The output voltage is programmable using a resistor divider and feedback pins; this is necessary, as the value of the resistors will dictate the voltage output. The output current will depend on the load requirements and the desired intensity of the LEDs. For an LED application, constant current is necessary in order to keep a specific desired brightness; maintaining that brightness under all conditions in an automotive system is part of the challenge. This reference design used current sensing to achieve constant current with the LM3481-Q1 boost controller.

In order to generate constant current with the output voltage closed to the input voltage, you may think that you need to use a buck-boost or single-ended primary-inductor converter (SEPIC) structure, which is complex and costly. But by connecting the cathode of LED strings to input instead of ground, you can modify the reference design to a boost-to-battery configuration. In such a configuration, the input voltage can either be higher, lower or equal to the required LED strings voltage.

For the boost-to-battery, the reference design provides another solution for open-circuit protection. Using transistor Q2 (see schematic) combined with R5, R6, R7, R8 and D2 detects the differential voltage between output voltage and input voltage. When the differential voltage rises up to the overvoltage at output (Vov), Zener diode D2 will turn on and pull the compensation pin voltage down by Q3. As a result, the output voltage will stay low until the load appears again.