Sensing technologies are changing safety and comfort functions inside vehicles, and it is becoming increasingly important to accurately determine whether and where a person is seated inside. According to San Jose State University, an average of 37 children die in a hot car each year, “more than half of [which occur] after a parent or guardian forgets them in a vehicle.”

Millimeter wave (mmWave) sensing technology can detect a person’s presence under even challenging environmental conditions like bright light and darkness. Unlike other sensing technologies, mmWave can pass through materials like plastic, drywall and clothing, allowing the sensors to be hidden behind a fascia and placed inside or under other materials inside the vehicle, making them contactless and nonintrusive. For example, an ultrasonic sensor cannot distinguish between a person and a static object, and cameras will fail to detect a baby in bright light or dark conditions.

Child presence detection has also found its place on EURO NCAP roadmap, driving car manufacturers to offer this feature to elevate a car’s star rating. Our scalable portfolio of 77GHz mmWave sensors, which includes the AWR1642 and AWR1843, addresses these use cases. For use cases that require higher resolution, such as detection of the pose of a passenger or driver, high performance imaging radar using cascaded mmWave sensors could be used. With our mmWave sensors, car interior sensing solutions could sense all the occupants inside a car, detect their vital signs and distinguish between occupants.

Detecting occupants inside a vehicle

The AWR1642 77GHz single-chip mmWave sensor with on-chip memory and a digital signal processor is a good fit for these applications because of its ability to sense very small movements, even breathing, that would indicate the presence of a person. We used the AWR1642 evaluation module to demonstrate occupancy inside a static vehicle. The sensor is suspended from the sunroof for demonstration purposes, looking toward the back seat, as seen in Figure 1, though it would likely be placed inside the seat back, around the rear view mirror or even the roof in a real-world installation. The entire processing chain of detection, including algorithms for the removal of any static clutter that might exist, is implemented on the sensor. In Figure 1, baby Max is sleeping in the child seat, covered with a blanket. The sensor not only detects Max despite the blanket, but also accurately locates his position as the rear right position. 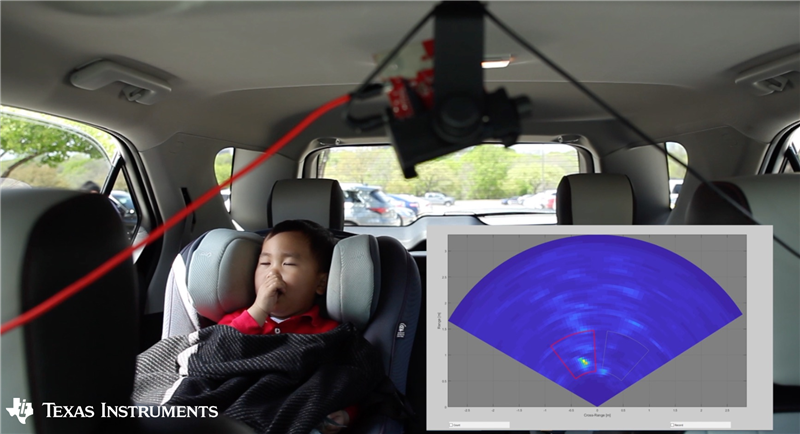 Figure 1: Child occupancy detection inside a car using a TI mmWave sensor. The mmWave sensor is suspended from the sunroof. The detection is shown in the graph visualization as a heat map.

In Figure 2, two people are sitting side by side in the rear seat. Their occupancy, indicated by the two red boxes, is detected by the mmWave sensor. The scenario can be easily extended for occupancy detection in multiple rows of a vehicle because mmWave sensors can “see” and distinguish people at extended distances. 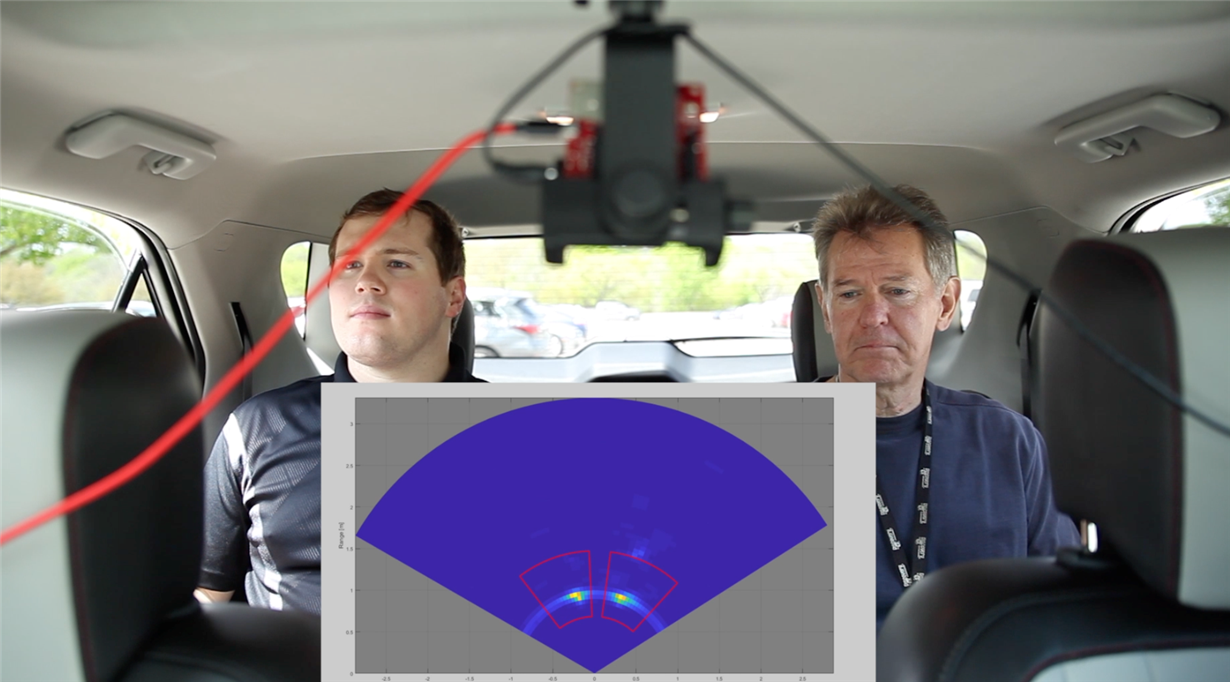 In Figure 3, the sensor detects a person just outside the vehicle who could be a possible intruder. The same sensor that detects occupancy inside a vehicle can also detect people in the immediate vicinity. It’s also possible to implement advanced algorithms to distinguish between a person and a moving object, such as tree branches blowing in the wind. 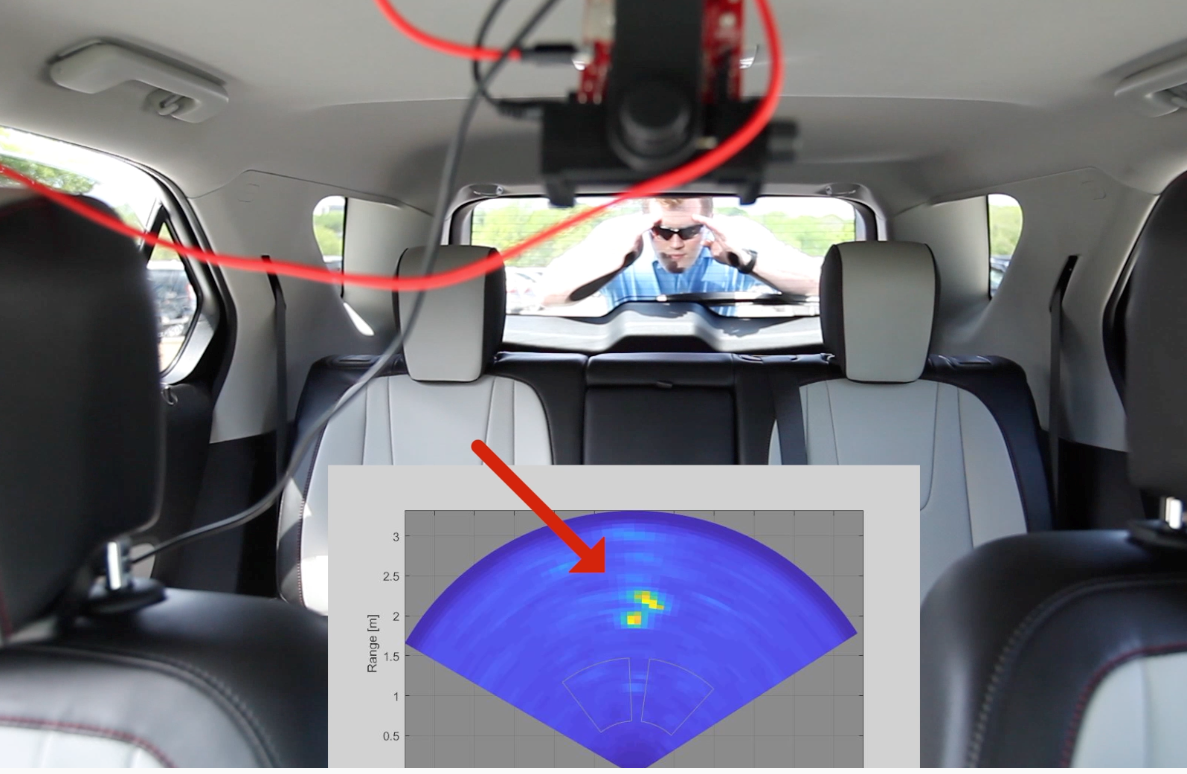 The Vehicle Occupant Detection Using AWR1642 reference design provides a system-level overview and the reference software processing chain for detection of two-person occupancy inside a vehicle. The TI Design Guide explains in detail the implemented algorithms and you can try the demo either in a lab environment or an actual vehicle to detect two-person occupancy. The demo is easily modifiable to extend to multiple people detection as well.

mmWave sensors are enabling solutions for not only advanced driver assistance systems (ADAS) but also body, chassis and in-cabin applications. Child occupancy detection is a feature in the European New Car Assessment Program (Euro NCAP) roadmap, with implementation expected by 2020. Automotive original equipment manufacturers (OEMs) and Tier-1s alike are looking for a sensing technology that can provide this feature in a contactless and nonintrusive way. Other critical factors include cost-effectiveness and solution form factor; mmWave sensors fit the equation, with its single-chip optimized bill of materials, small and compact size, and high resolution. I would be excited to see this sensing technology in my next car. Wouldn’t you?