Automotive instrument clusters are in the middle of a revolution. The cluster is rapidly becoming a part of the larger infotainment ecosystem. Consumers are driving around with intelligent, quickly evolving displays on their dash, but the audio chimes – the essential driver alerts that come from a speaker housed inside the cluster – are lagging behind.

Cluster audio does not get the attention that a vehicle’s central head unit audio gets. Advances in low-power audio technology are enabling new trends in cluster systems, however.

Out with the old

Analog gauge clusters are a dying market, replaced in most vehicles by a hybrid cluster featuring digital displays. However, discrete audio amplifiers – the source of the chime in these ancient electromechanical clusters – have stuck around, in spite of the vast leaps in automotive audio technology.

Discrete amplifiers emit a sound resembling a weak buzz more than a proper audio signal. The microcontrollers responsible for controlling the whole cluster often have only one output pin to spare for generating a pulse-width modulated (PWM) audio signal. After passing through a low-pass filter, the signal becomes a simple sine wave, which is amplified by a discrete amplifier. The sound is often overdriven in order to achieve the sound pressure levels (SPLs) that the vehicle manufacturer requires.

Replacing the discrete amplifier with an integrated audio amplifier (Figure 1) is a simple but rewarding design change. For example, feeding the same signal into the input of the TPA6211A1-Q1 Class-AB amplifier provides the benefits of:

Engineers who have embraced the benefits of integrated audio are advancing what solid-state instrument clusters and the audio chime can do for drivers. For example, advanced driver-assistance systems (ADAS) make use of the cluster speaker in some vehicles to provide an auditory warning when drivers need a reminder to remain alert. Common driver errors, such as drifting out of their lane or failing to check their blind spot, cannot be fixed by a loud chime, but chimes can help give the driver an extra sense of what is happening around them. It is possible to make forward collision, blind spot and lane departure warnings more effective by using the cluster chime to alert drivers without forcing them to divert their eyes from the road.

These advanced features are made possible by the adoption of advanced automotive processors, such as TI’s Jacinto DRAx digital cockpit systems-on-chip (SoCs), which operate the cluster displays in hybrid and solid-state clusters. Processors with memory open up the possibility of storing digital waveforms. Rather than rely on a single pin for audio output, digital processors use an I2S bus, possibly as an FPD-Link channel, to send the digital audio data to the speaker amplifier. This increases the range of sounds that a cluster can make.

Digital audio amplifiers provide a huge benefit in such systems, eliminating the need for a digital-to-analog converter to convert I2S to audio. As Figure 2 shows, introducing a digital input amplifier to a cluster design can open up the possibilities for chime alerts with little additional cost and only simple design changes. 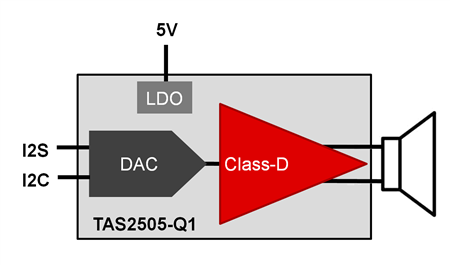 Load diagnostics are a major concern for automotive audio systems. During production or in use, the speaker wiring can become disconnected from the speaker (an open load condition), create a short between the wires (a terminal short condition), or come in contact with the voltage rails (a short-to-ground or short-to-power condition). All of these events can damage the amplifier and speaker if not detected quickly. Damaged audio systems are not only expensive but can be hazardous to drivers in a vehicle that uses the cluster chime for ADAS warnings.

Automotive amplifiers have begun to integrate load diagnostics to help lessen design challenges and costs. Amplifiers with integrated load diagnostics notify the cluster processor of the fault and can mute or shut down the device as necessary to prevent permanent damage to the device or speaker.

With all of the advances in automotive technology, what’s next for the instrument cluster, and what does that mean for the audio chime? For some manufacturers, it means louder, clearer and more immersive audio experiences.

Some manufacturers are moving toward integrated cockpits, which bring the cluster processor into the head unit. The processor generates the graphics, which are sent via FPD-Link to a remote cluster display in the familiar space behind the wheel. I2S signals from the processor can be sent via FPD-Link to the cluster audio amplifier. Cluster chimes can also be amplified by a spare channel in the infotainment amplifier, bringing the cluster’s audio into the head unit as well.

Modern drivers are now accustomed to the bells and whistles in their vehicles that make the driving experience safer and more fun. Designing clear, robust cluster audio systems is simple yet critical. With that in mind, how can you afford not to use the best low-power integrated audio amplifiers available?