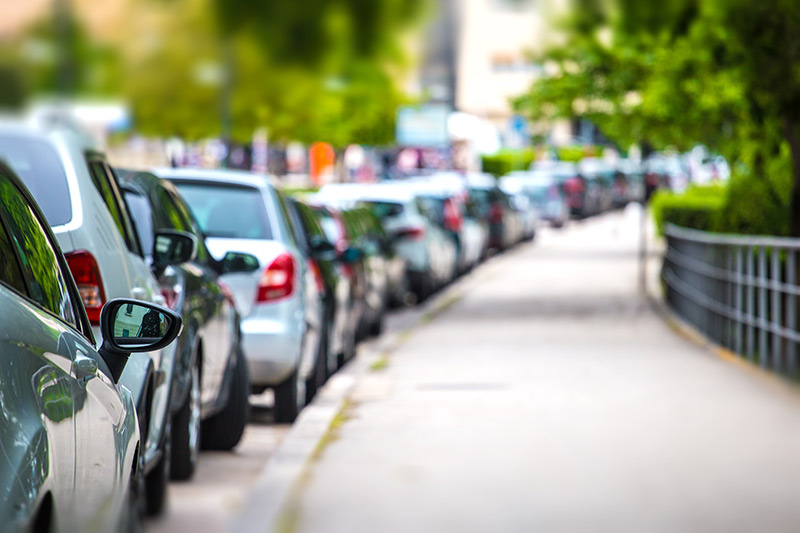 As automotive original equipment manufacturers develop vehicles with increasing autonomy, automating the act of parking continues to evolve. These parking systems include park assistance (where a driver’s participation is still necessary) and automated parking (where hands-free operation is possible).

Today’s automotive parking systems use ultrasonic and camera sensors. Ultrasonic sensors work by sending out high-frequency sound waves that are reflected by objects in its path. The sensors gauge the distance of nearby objects by measuring the time between emission and reception. Ultrasonic and camera technology does have certain limitations, however, including:

Reliability is the greatest drawback to other sensing technologies such as ultrasonic, capacitive and camera systems. Water, dirt, debris, fog, snow, and low or bright lights can hamper other sensing technologies, but not mmWave radar. Radar continues working in various environmental conditions. Additionally, radar does not require the nonmetallic bumper cutouts, preserving the aesthetics of the car while also protecting the radar sensors.

mmWave radar can detect objects from farther away than other sensing technologies such ultrasonic sensors. Instead of emitting a sound wave, radar sensors create radio waves: the longest wavelengths in the electromagnetic spectrum. These radio waves bounce off of objects in their path to determine distance by calculating changes in frequency. Because radio waves can transmit further, they have longer detection ranges. By sensing objects at greater distances, more objects in the vicinity of the parking area can be detected. TI’s AWR1843AOP device can detect objects as far away as 50 m.

As well as maximum range limitations, ultrasonic sensors have minimum range limitations of around 10 to 15 cm. Whereas TI’s mmWave radar can detect objects as close as 4 cm away, which can help vehicles maneuver tight, compact parking spots and detect curbs close to the vehicle. A radar’s channel bandwidth inversely correlates to range resolution: the ability to distinguish between two or more objects. AWR1843AOP’s bandwidth of 4 GHz correlates to a range resolution of around 4 cm. 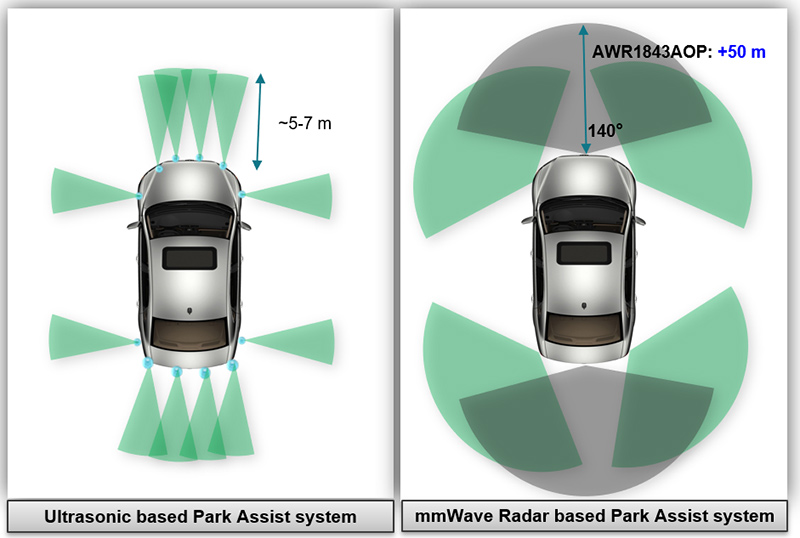 Figure 1: Comparison of range and field of view for ultrasonic vs. mmWave radar systems

Other sensing technologies, such as time of flight and ultrasonic, may not detect objects located far below or above the height of the sensor. The AWR1843AOP’s 140-degree vertical field of view enables the detection of low objects such as curbs, bollards, small animals and debris on the road. Figure 2 shows the detection of a cinder block acting as a low-height curb using the AWR1843AOP evaluation module (EVM). 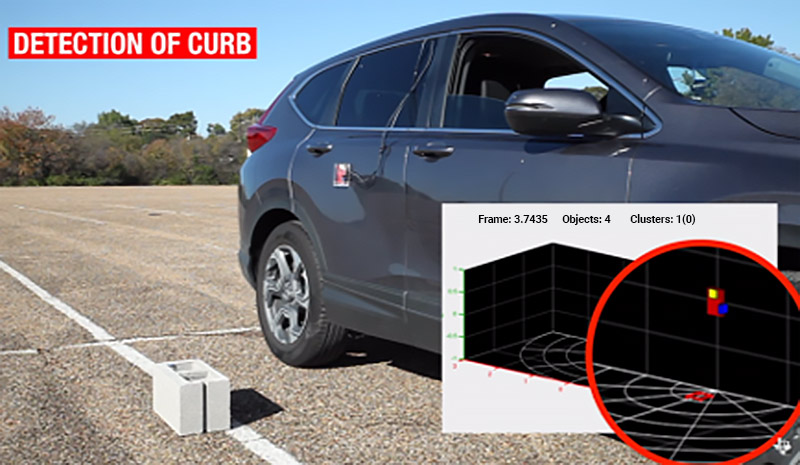 Combining a wide field of view and high range resolution enables the detection of and distinction between multiple static objects simultaneously. Figure 3 shows radar’s ability to distinguish between several different types of objects with minimal surface area and differing materials, including wood, metal and plastic. 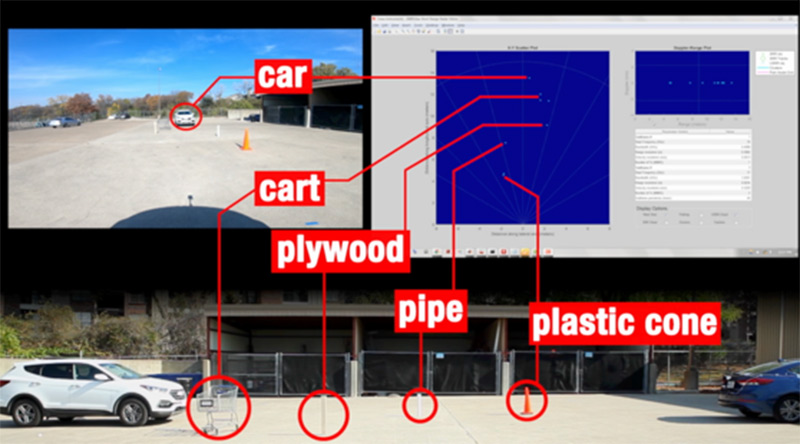 As automakers and Tier 1 suppliers turn to 77-GHz mmWave sensors for improved performance for detecting objects while parking, TI’s AWR1843AOP mmWave radar sensor integrates the antenna, radar transceiver, digital signal processor, microcontroller and interface peripherals all onto one chip, shown in Figure 4. Integrating the package onto the chip eliminates the need for a high-frequency substrate material. Not using a high-frequency substrate material greatly reduces costs as well as manufacturing complexity when compared to other radar sensors, while saving about 30% of board space.

Eliminating the need to design, simulate and characterize antenna performance can even speed up time to market. Additionally, TI’s software is reusable and portable across the company’s 60- and 77-GHz devices, enabling faster multi-radar system-level designs.

Additionally, it is possible to program the AWR1843AOP to reconfigure the same sensor for multiple applications – using the same sensor for parking as well as detecting objects when opening car doors, for example. It’s even possible to repurpose existing radar sensors used for other functions such as blind-spot detection to serve parking radar functions, thus reducing overall system costs.