Adaptive front light systems and adaptive driving beam headlight systems adjust the shape of low and high beams, respectively. Although adaptive headlights are available on cars in Europe, automobile manufacturers in the U.S. cannot use these advanced lights, but this may change soon. These adaptive systems use high-powered LEDs as a light source, which requires high-powered LED drivers to regulate current and achieve the required brightness. Switching LED drivers must be used to achieve high efficiency and implemented as dual-stage power-processing topologies for thermal management.

The first stage is a boost voltage regulator, which manages the widely varying automotive input voltage and creates a stable intermediate rail. The second stage is a buck current regulator, which can be implemented with a low output capacitance suitable for dynamic LED loads. But because the LED drivers are implemented as switching regulators, you will have to address electromagnetic compatibility (EMC) challenges.

Given how quickly headlight systems are advancing, design flexibility is key. In adaptive systems, you can use the new TPS92682-Q1 dual-channel, dual-phase LED controller as a constant voltage boost regulator for the headlight’s first stage. If static headlights are on your roadmap, you can configure this device as a constant-current buck-boost/boost/single-ended primary-inductor converter (SEPIC) LED driver. The TPS92682-Q1 also has programmable spread-spectrum modulation that helps meet EMC requirements easily.

For the buck current regulator second stage, another device, the TPS92520-Q1, offers high power density in a small solution size, enabled through a monolithic, dual synchronous buck constant-current LED driver with up to 2.2-MHz switching frequency and Serial Peripheral Interface. In addition to the high level of integration and power density offered by the TPS92520-Q1, its control architecture provides true average current regulation, along with dynamic and matrix load compatibility.

While the TPS92682-Q1 and TPS92520-Q1 can be the driving forces of a headlight’s electronic control unit (ECU), found in any headlight system, it is the matrix-manager integrated circuits that are responsible for adjusting the headlight’s beam shape, as shown in Figure 1. Matrix managers are found in the headlight’s pixel board, where they precisely control the intensity of each pixel to generate different beam patterns and illuminate the entire field of view while avoiding glare from oncoming traffic. 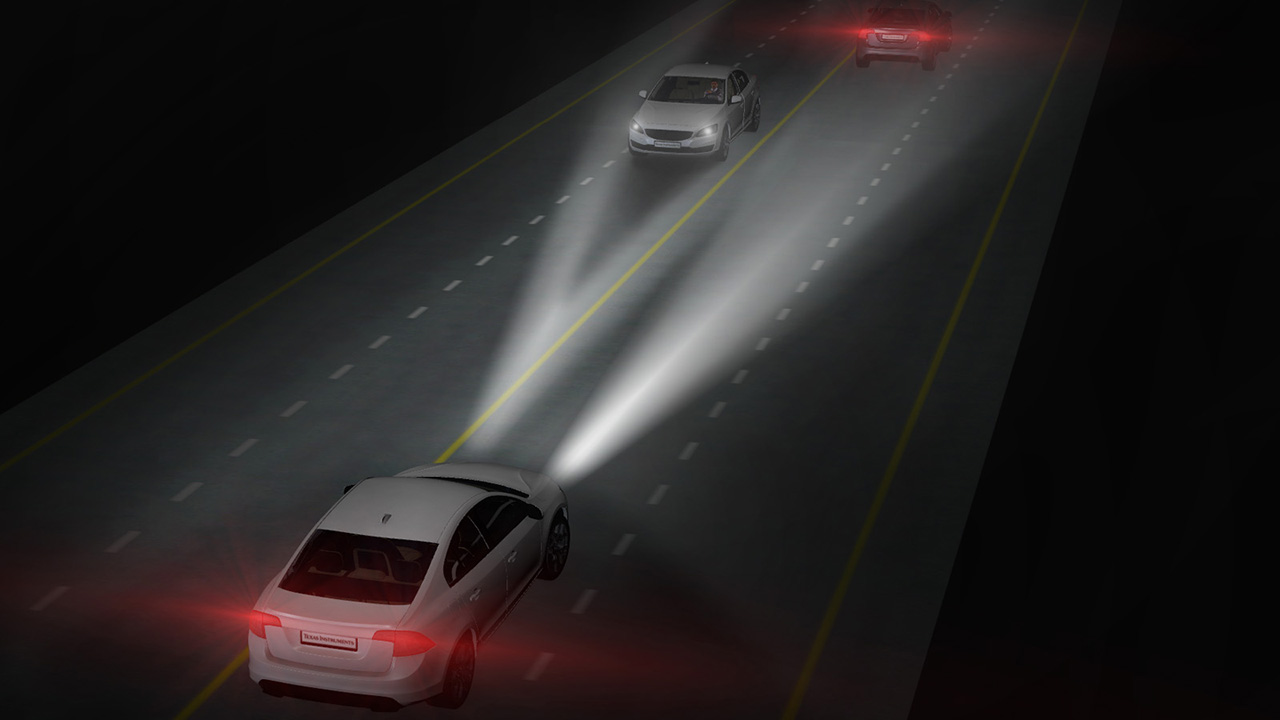 Because LED pixel boards are typically cabled through a wire harness to the ECU, robust communication and reduced harness size are challenges. The TPS9266X-Q1 provides a robust yet lightweight communications interface as well as a full suite of diagnostics to detect and report pixel-level LED faults directly to the ECU.

TI DLP technology-based headlights not only enable high-resolution adjustment of headlight beam shapes; they also enable symbol projection to assist drivers. Symbols can communicate to both drivers as well as others on the road. For example, lane marking, which uses headlights to draw the planned path of the car on the road, can help drivers as they navigate hazardous driving conditions, and also help communicate to others where the vehicle will be traveling. The DLP5531-Q1 chipset is automotive-qualified, optimized for headlight applications and on the road today. Check out the DLP auto headlight reference design.

Another way to change the light beam is headlight leveling, in which the beam lights the road regardless of the road inclination or whether the driver accelerates or decelerates. Pointing the headlight to the road especially enhances visibility while driving in the night making driving safer. Bipolar stepper motors are typically used to control headlight leveling. The DRV8889-Q1 stepper motor driver not only has the power stage to drive the motor, but also has stall detection capability without the need for an additional sensor. The stepper-motor driver reference design shows example schematics and a layout for the DRV8889-Q1 and includes EMC results.

LED light sources are becoming popular for rear light signal functionality such as brake lights and turn indicators, and can now even include animation and/or personalized lighting messages.

The Automotive Dual Stage (SEPIC + Linear) Static LED Driver Module Reference Design for Rear Lights shows a dual-stage LED driver with the first-stage voltage regulator implemented using the LM5155-Q1 configured in a SEPIC topology. This buck-boost topology enables operation of the lights at low battery voltages and regulates the voltage down at high battery voltages in order to optimize the second-stage LED drivers from a thermal management perspective.

The TPS929120-Q1 includes 12-bit pulse-width modulation (PWM) dimming and offers off-board support – suitable for rear lighting implementations that may span across the entire length of the vehicle, as shown in Figure 2. The TPS929120-Q1 can interface with CAN or LIN communication transceivers, as shown in the digital interface LED driving module reference design, for improved communication robustness. Figure 2: Rear lighting that spans across the length of a vehicle

Rear lights are implementing new ways of signaling that combine styling and personalization. One example is the swiping turn, where the turn indicator LEDs light up in sequence instead of all at once, making it appear as if the turn indicator is swiping. Another trend is to use the rear light to display welcome messages for drivers or to even display message alerts for drivers behind the car.

Lighting inside the cabin is also changing. One such change is the adoption of a large array of LEDs in order to either display personal messages such as welcome messages or to adapt the light beam to shine at a specific location, such as on the front passenger seat as it moves.

The TLC6C5724-Q1 is a 24-channel red-green-blue LED driver that independently controls each channel, which is critical for zoning applications. This LED driver, along with a front-end buck converter such as the LMR33630-Q1 or LMR36015, are a good combination for personalized interior lighting such as zoned dome lights or RGB lighting. The LMR33630-Q1 is a 36-V input voltage/3-A output current device, while the LMR36015 is a 60-V input voltage/1.5-A output current device with a maximum junction temperature of 150°C. A front-end buck regulator improves thermal performance of the solution, as illustrated in the EMC-tested Automotive Pixelated Dome Light Reference Design for Interior Lighting.

The original intention of ground projection, sometimes called “puddle lights” or “light carpets,” was to shine light near vehicles to help drivers navigate entering. The next generation of puddle lights will enable dynamic ground projection using DLP technology, which can not only dynamically change where light is projected but dynamically change what is projected. This feature can communicate information to drivers before they enter their cars, alert those around the car or provide a branding opportunity for automakers. Cars with static puddle lights that project a static symbol such as a logo are now available.

As ride-sharing continues to expand, there is a need to develop systems to display sharing-related messages to customers. Additionally, the trend toward autonomous vehicles demands methods for cars to communicate with other vehicles and pedestrians.

One space that can display such messages is a car window. DLP technology can project information on windows when the car is stopped and keep the windows clear when the car is being driven. This type of DLP projector, combined with specialized screen technology, can also display billboard advertisements on the window, which is an attractive prospect for car OEMs.

There are multiple types of screen technologies that enable a transparent window display, and for many of them, DLP projectors are a natural fit to illuminate the screen. One such technology is an emissive phosphor film embedded inside car windows that is excited by a 405-nm light inside a DLP projector. TI offers the DLP3034-Q1 and DLP5534-Q1 that support 405-nm-based illumination sources.

Lighting systems throughout vehicles are implementing new and exciting functions. TI’s semiconductor products are enabling the easy design of these features, along with reference designs to give you a better starting point for your designs and reduce time to market.