Instead of using the digital cluster or infotainment screen to deliver critical driving information, some auto manufacturers are beginning to use augmented reality (AR) head-up displays (HUDs) or near-field windshield displays to present this information directly in the driver’s line of sight. These displays must be high resolution so that drivers can quickly identify the images and react to them, and since automotive displays are becoming larger, they require higher resolution every year.

An AR HUD image is a virtual image focused 7.5 to 15 m in front of the driver, so resolution is typically measured in pixels per degree (ppd) instead of the number of pixels or pixels per inch (ppi).A typical AR HUD layout is shown in Figure 1.

Resolution density and pixels per degree

Measuring resolution density in ppi only tells part of the story, as it doesn’t factor in viewing distance. Even an ultra-high definition (UHD) or 4K display may exhibit some pixelation if you view it from an inch away. Because viewing distance is very important in perceived resolution, you can use ppd to more accurately represent resolution for all distances.

The typical measurement for perfect vision is 20/20 (feet) or 6/6 (meters). A person with 20/20 vision can resolve pixels at about 60 ppd or less, meaning that all images with a resolution higher than 60 ppd will have equivalent clarity to the viewer. Since less than 20% of the population over the age of 35 has better than 20/20 vision, 60 ppd is typically considered the highest resolution that humans can see and is the limit for a retinal-limited display. When displays have at least a 60-ppd resolution density, they look great. For example, viewing the infotainment screen in the Tesla Model S (17 inch, 1920-by-1200 resolution) from 25 inches away (about an arm’s length) creates a 60-ppd display.

To find ppd, take the number of pixels visible on-screen in one dimension and divide by the angle the display occupies in the viewer’s field of view (FoV). For example, if a cellphone screen has a 4.1-inch screen height and is viewed from 10 inches away, it occupies about 23.2 degrees of the vertical FoV. If the cellphone has a vertical resolution of 1,334 pixels, then you’ll see about 57.6 ppd in the vertical direction. See Figure 2 for a visualization of ppd. 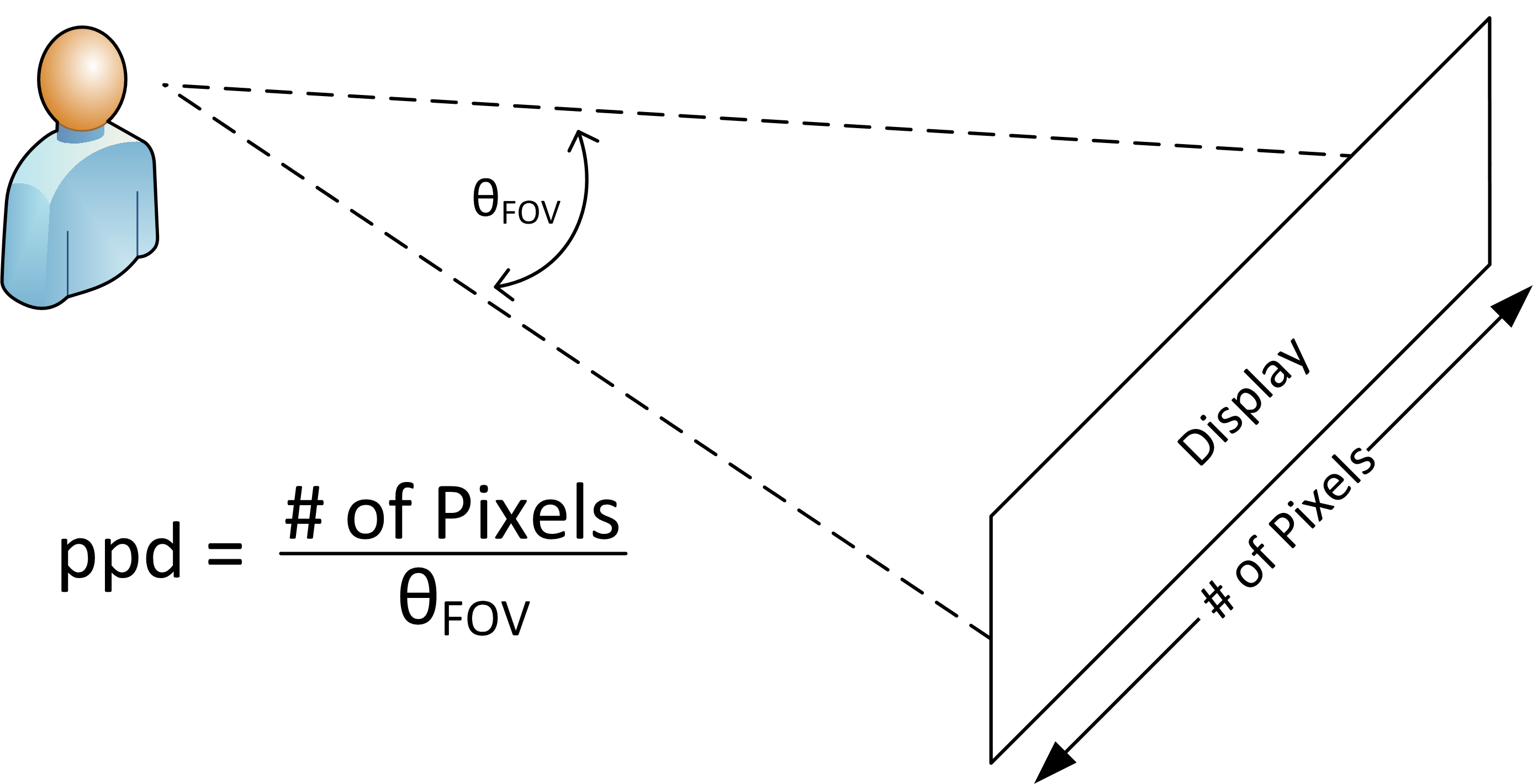 Because the resolution of a HUD scales with FoV, you need to understand the desired resolution and when increasing the image resolution no longer improves image quality. A HUD system is typically designed for resolutions higher than 60 ppd; in fact, 80 ppd is a very typical resolution target for HUD designs. This increase allows some margin for factors that slightly reduce image resolution – such as image warping to shape the display or any image distortions present in the system – while still displaying an image sufficiently above 60 ppd. Figure 3 shows an example of the FoV of an AR HUD supported by TI DLP® technology. 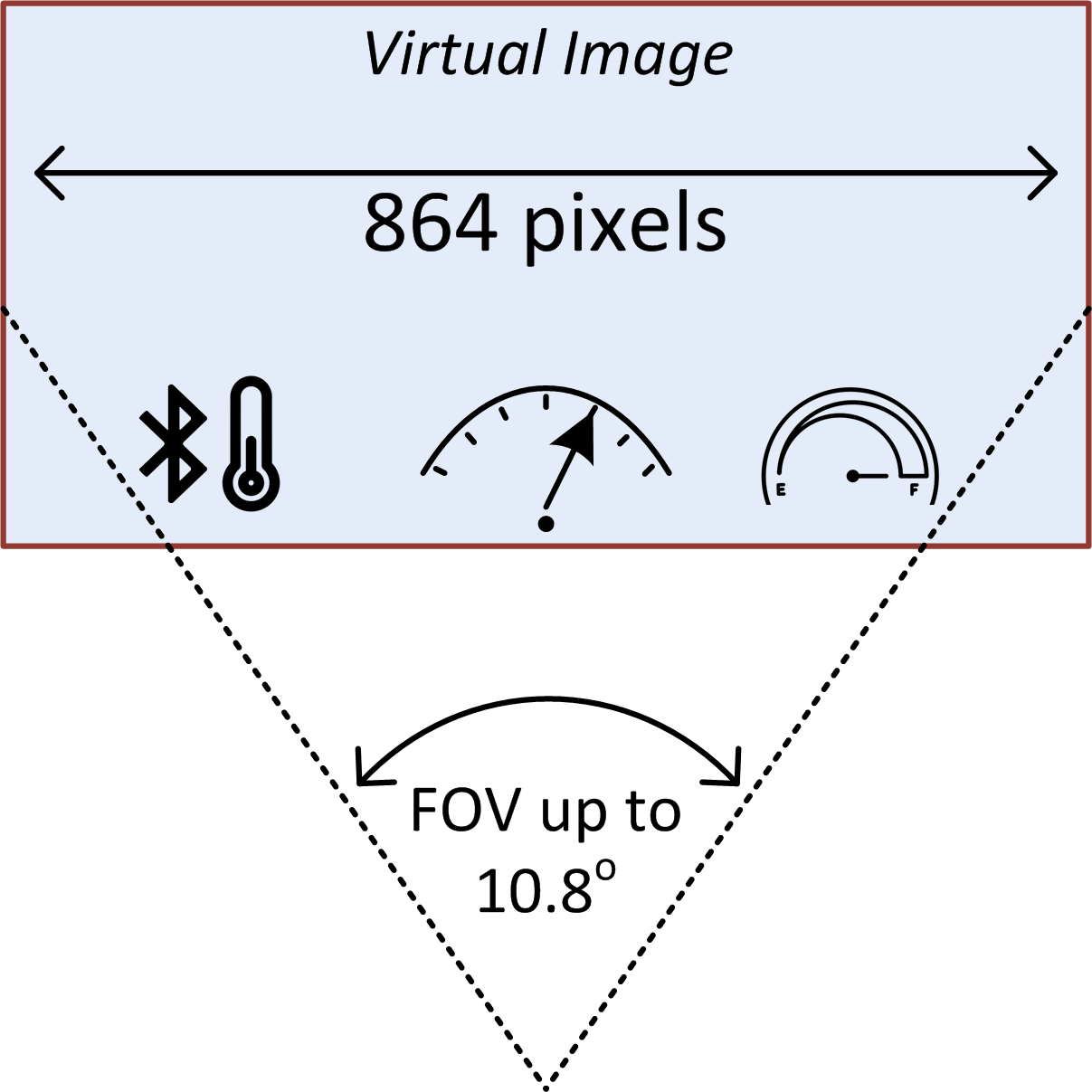 Designing a HUD to achieve 80 ppd puts some constraints on how large the FoV can be. While all HUD systems create an image with a fixed number of pixels – and the virtual image can only be enlarged so much before the resolution falls below 80 ppd – DLP technology supports a very large FoV. With DLP technology, the real image is formed by a DMD and reflected off the windshield to display the virtual image. The automotive-qualified DLP3030-Q1 DMD supports display resolutions of 864 pixels by 480 pixels. Maintaining an image resolution of 80 ppd, this DMD supports large FoVs up to 10.8 by 6 degrees, as shown in Figure 4. 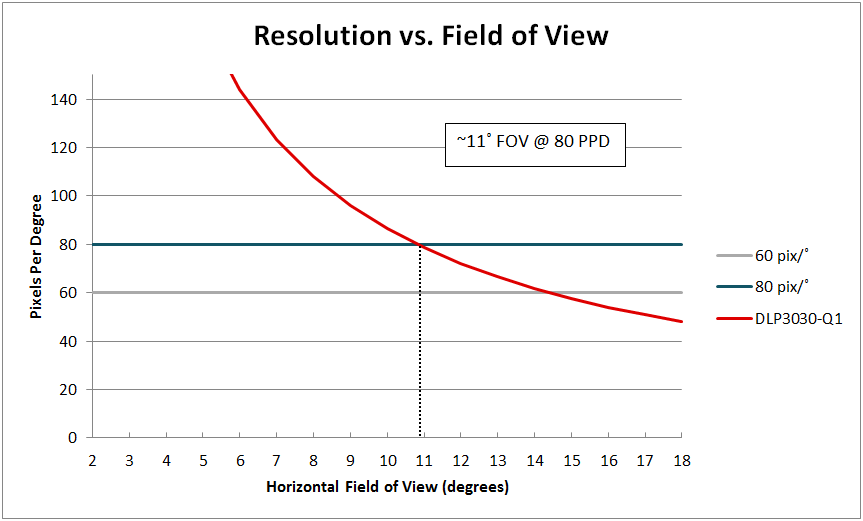 High resolution is important in HUD systems but can be difficult to compare to more traditional displays. Maintaining a 60 ppd resolution will help achieve the best image quality and create a retinal limited display. Using DLP products chipsets in a HUD can help achieve very wide FoV displays at the highest resolution. To learn more about HUDs and the DLP3030-Q1 chipset, see the DLP automotive chipsets overview page.[C1]