As electric vehicles (EVs) become more popular, the challenge for automakers is to reflect true range while making the vehicle more affordable. This translates into making the battery packs lower cost with higher energy densities. Every single watt-hour stored and retrieved from the cells is critical to extend the driving range.

The main function of a battery management system (BMS) is to monitor cell voltages, pack voltages and pack current. In addition, due to the high-voltage design of the BMS, insulation resistance measurement between the high-voltage domain and low-voltage domain is needed in order to catch defects in the battery structure and protect against hazardous conditions. 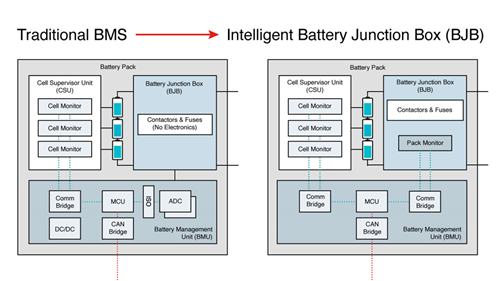 Figure 1 presents a typical BMS architecture containing a battery management unit (BMU), cell supervisor unit (CMU) and a battery junction box (BJB). A BMU typically has a microcontroller (MCU), which manages all of the functions within the battery pack. The traditional BJB is a relay box or a switch box with power contactors that connects the entire battery pack to the load inverter, motor or the battery charger.

Figure 1a shows the traditional BMS. There are no active electronics inside of the junction box. All of the measurements in the BJB are measured at the BMU. There are wires connecting the BJB into the analog-to-digital converter (ADC) terminals.

Figure 1b shows the intelligent BJB. There is a dedicated pack monitor inside the box that measures all voltages and currents and passes the information to the MCU using simple twisted-pair communication. It helps eliminating wires and cabling harnesses; and improves voltage and current measurements with lower noise.

Figure 2 shows the different high voltages, current and temperatures that the pack monitor measures inside a BJB enabled by the BQ79731-Q1 battery pack monitor. 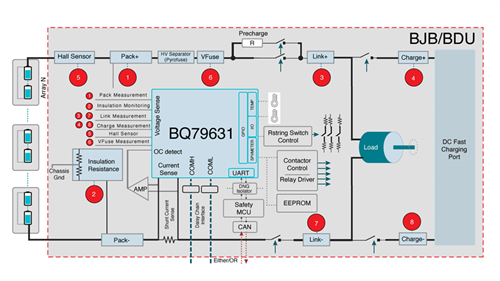 Figure 2: High-voltage measurements inside the BJB

Over current fault detection and protection

Detection and prevention of an over-current even is required in a BMS in order to prevent catastrophic damage that can occur to the battery pack in the event of a short circuit, exposed high-voltage terminal or defective equipment. An over current circuit integrated in the BJB unit will use the current sense information measured through either the shunt resistor or hall-effect sensor and the battery pack monitor. This measurement is then processed and compared to a threshold inside the battery pack monitor while the same has the capability of signaling an over-current event through dedicated outputs which will be used to enable a fuse-driver in order to blow the high-voltage separator (pyro-fuse). Since the reaction time for this needs to be as fast as possible, a dedicated signal processing path is implemented in the battery pack monitor device.

Voltage and current synchronization is the time delay that exists to sample the voltage and current between the pack monitor and cell monitor. These measurements are mainly used for calculating state of charge and state of health through electro-impedance spectroscopy (EIS). Calculating the impedance of the cell by measuring the voltage, current and power across the cell enables the BMS to monitor the instantaneous power of the car.

Next-generation BMS will require synchronized voltage and current measurements in less than 1 ms, but there are the challenges in meeting this requirement:

Another benefit of the intelligent BJB is the streamlined data communication by using the versatile daisy-chain interface not just for battery pack and battery cell monitor devices, but also remote devices like EEPROM memory or any type of sensors that are placed in the modules with different physical placement in the vehicle. In this case the pack and monitor device also act as an interface translator offering I2C or SPI data to be transferred through the daisy-chain interface which eliminates wires and cabling harnesses and in turn reduces the overall EV weight.

The massive electrification efforts happening in the automotive industry are driving the need to reduce the complexity of BMS by adding electronics in the junction box, while enhancing system safety. A pack monitor can locally measure the voltages before and after the relays, the current through the battery pack. The accuracy improvements in voltage and current measurements will directly result in optimal utilization of a battery. The BQ79631-Q1 and BQ79731-Q1 from TI can optimize the performance and reduce the future cost of intelligent BJBs by integrating all necessary functions of the system in a single device. Effective voltage and current synchronization enable precise state-of-health, state-of-charge and EIS calculations that will result in optimal utilization of the battery.

In addition, TI’s BQ79616-Q1 and BQ79718-Q1battery cell monitor families offer accurate cell voltage and temperature measurements as a part of the CSU implementation which enables a complete BMS eco-system.