Lighting the road ahead: LEDs in automotive front lighting

Light-emitting diodes (LEDs) are becoming more and more popular in automotive front lighting; for example, many cars on the road today use LEDs in daytime running lights (DRLs). Some high-end vehicles even have a full LED headlight or advanced matrix headlight installed. In this post, I will describe the most common automotive front-lighting architectures and some possible developments in this area.

Typical automotive front-lighting systems consist of a high-beam lamp, low-beam lamp, turn light, DRL and fog lamp. Except DRLs, most of these functions have traditionally used incandescent, Xenon or high-intensity discharge (HID) lamps. The simplest way to replace lamps with LEDs in headlights is to implement each function with an individual LED driver and connect a suitable number of high-brightness LEDs. Such an architecture, shown in Figure 1, is called a single-stage architecture, since a DC/DC LED driver, regulating a constant current, handles each individual lighting function. 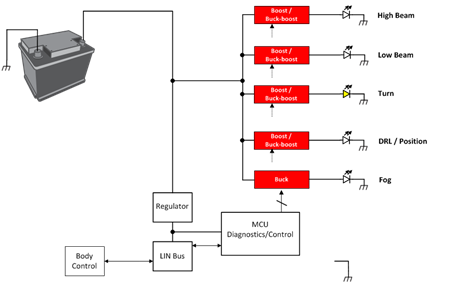 In a single-stage architecture, the converter needs to handle wide input-voltage variations from the car battery at extreme conditions such as load dump, crank, etc. It is common to have either a boost or buck-boost conversion topology. While some carmakers would prefer to implement the position lamp function together with the DRLs, it is also desirable to implement a dimming function with the LED driver. There are different Automotive Electronics Council (AEC)-Q100-qualified low-side N-FET controller devices from TI which can nicely implement this type of LED driver, such as the TPS92691-Q1, LM3424-Q1 and LM3423-Q1.

The platform approach is a recent trend in how to implement a full LED headlight. As shown in Figure 2, an intermediate boost converter handles all car battery voltage variations and provides a high output voltage, such as 48 V, that can handle the various LED string lengths used for different headlight functions. As long as the LED string voltage is below 48 V, the DC/DC buck converters can act as LED drivers. 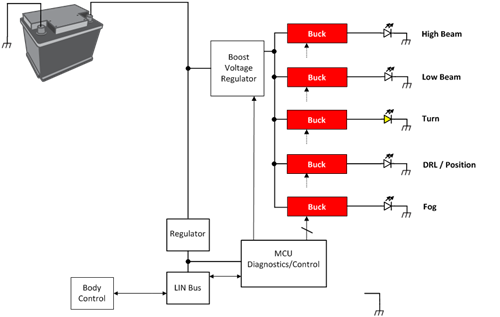 One of my previous blog posts described an adaptive headlight which could improve road safety. In the post, I introduced a matrix-manager device, the TPS92661-Q1. Let’s look at how to construct such a system from an automotive front-lighting perspective, regardless of the advanced driver-assistance system (ADAS) camera. The two-stage architecture is easily adoptable as an adaptive headlight by adding matrix-manager devices to individual LEDs according to different headlight functions, as shown in Figure 3. 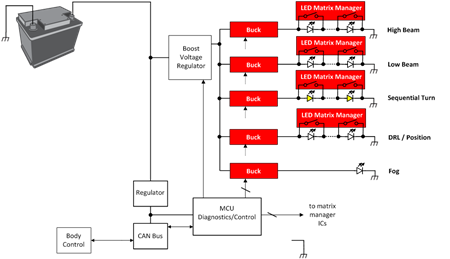 Figure 3: Adaptive headlight based on a two-stage architecture with matrix-manager devices

The matrix-manager devices control individual LED brightness/on/off through a microcontroller unit (MCU) running on a digital protocol. This technique can realize different advanced lighting features, from a simple sequential turn or welcome light to a complicated anti-glaring function. Because an LED’s brightness/on/off changes dynamically according to road situations (analyzed by the ADAS system, not shown in Figure 3), the buck LED driver should be able to operate fast enough so there is no potential voltage/current overshoot event to damage the LEDs. Buck drivers such as TPS92515HV-Q1, which support shunt-FET dimming, would be the best choice for such a system.

Designing with LEDs can result in better automotive front-lighting systems. Vehicles on the road not only have gorgeous headlights, but headlights which can also enhance road safety. Get more information on a wide variety of automotive LED drivers from TI and follow “Behind the Wheel” for more blogs on automotive LED lighting and electronics.