Smart Power High Side Switch is the device with protection and diagnosis features, in which the system can easily realize the high reliability and intelligent fault detection. It’s widely used in automotive and industrial applications, for example, as a power switch for the rear view camera or the LCD screen in the infotainment system.

One common design problem for these applications is the big inrush current, mostly derived from the abrupt low impedance in two scenarios: driving a big capacitive load or the hard short circuitry. To overcome this barrier, the pre-stage power margin, post-stage device stress, and the whole PCB traces and connector sizes should be carefully considered.

Nowadays, current limit function is implemented in most high side switches. The limit threshold is internally fixed due to the legacy of driving the high wattage bulbs in the automotive BCM system. For the other type of loads, the fixed value is too big for the clamping and protection. For example, some customers tend to use a 100mΩ RDSon device to drive an audio speaker amplifier module, in which the nominal current is only 1A but with 2 units of 470uF input cap.  For a traditional high side switch, the fixed current limit value is larger than 10A, so the inrush current increases up to 13A violently. This would create a big burden for the whole system design.

TI introduced a solution to help solve the inrush current trouble. The TPS1H100-Q1 is a fully protected high-side power switch, with integrated NMOS power FET and charge pump. Customers can easily set the current limit they want by connecting one external resistor to the CL (current limit) pin. The external resistor is used to convert a proportional load current into a voltage, which is compared with an internal reference voltage. When the voltage on CL pin exceeds the reference voltage, the current is clamped.

After the easy set-up, let’s show where amazing happens. 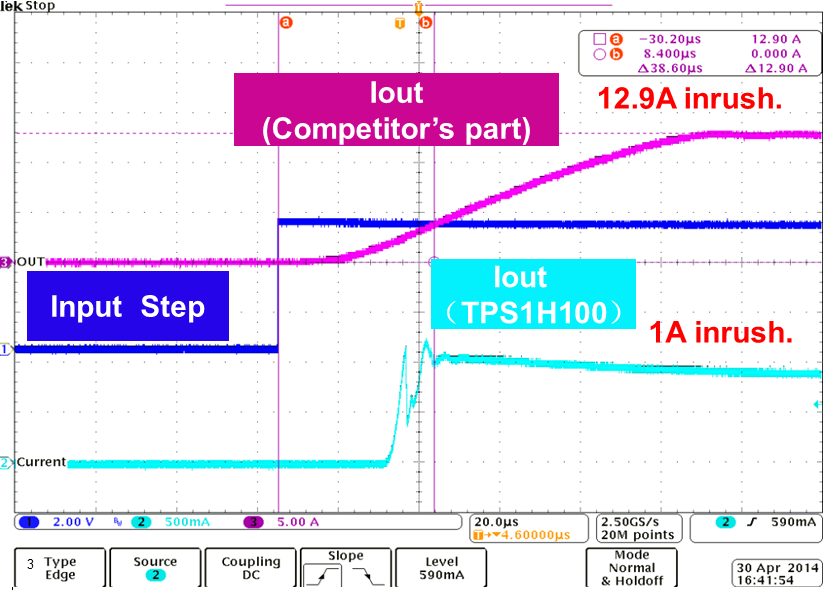 Customers typically prefer the inrush current overshoot as low as possible and the response time as quick as possible. With the distinct device design, TPS1H100-Q1 can achieve much better performance both specifications.

With this feature, the system can get much higher reliability to avoid big inrush current, while saving the cost of the preceding stage power supply and surrounding protection components.

To learn more about this new approach to clamp the inrush current, check out the TPS1H100-Q1.