This article was originally published on eeworldonline.com.

A local dimming backlight technology individually adjusts LEDs in an LCD panel to save power and improve contrast ratios in automotive displays. Compared to globally dimmed displays and organic LEDs (OLEDs), local dimming with LEDs is a more practical design choice because it can withstand the extreme temperatures and vibration common in automotive applications and offers better performance than globally dimmed displays.

It is possible to achieve peak performance from a full-array local dimming architecture with a delicate approach toward the optimal number of LEDs and zones. In this article, I’ll review some of the design considerations for implementing such an architecture.

Read part one, “A better automotive display from pixel to picture with local dimming”

System cost and performance of a local dimming system are directly related to the number of LEDs and zones. If there are too few zones, the resulting zone size will be too large, and a halo effect will occur where light bleeds into pixels that need to be fully dark for the best contrast. Other causes of the halo effect include a light spread function of the particular zone, zone overlap, spatial filters in the dimming algorithm, and the native contrast ratio of the LCD panel.

Figures 1 and 2 demonstrate the undesirable illumination of black pixels surrounding white pixels. The left half shows the higher black levels realized by local dimming and the halo artifact introduces immediately surrounding the white box. The right half shows a traditional edge-lit LCD with no halo effect but with a lower contrast ratio due to the light leakage of the LCD. 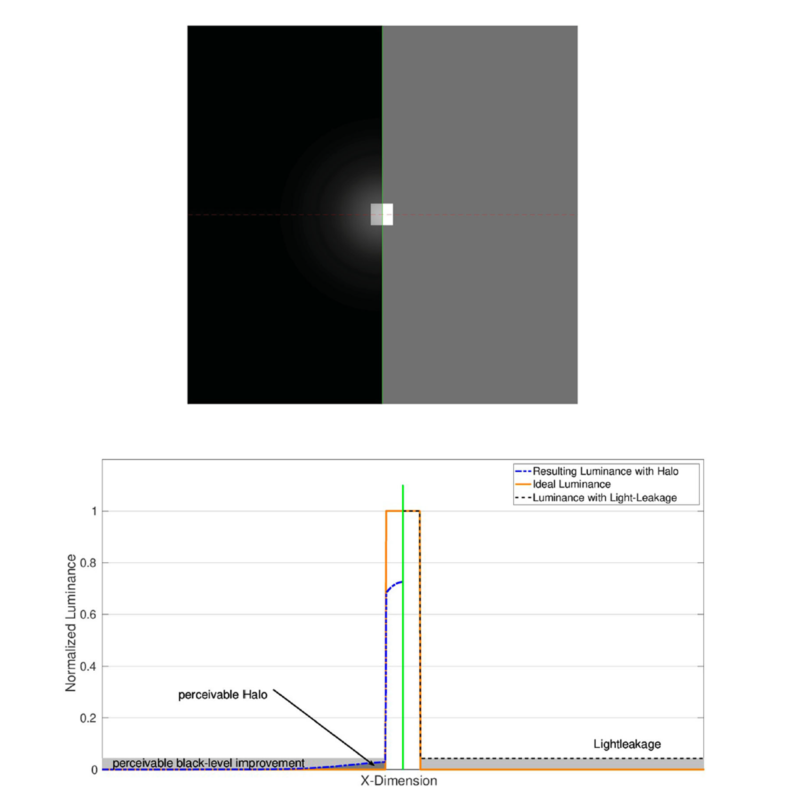 Figures 1 and 2 compare the halo effect with local dimming (a); and a traditional edge-lit LCD (b)

Careful consideration needs to be taken during the definition of the local dimming system parameters to ensure that local dimming performance outweighs the added system cost and artifacts introduced. The thickness of the backlight module, halo effect, thermals and system cost are all trade-offs to consider.

The number of dimming zones and LEDs per zone are the main priorities when designing a local dimming system. This combination defines the pitch of the LED array, which impacts the backlight module’s overall thickness to achieve homogenous light distribution across the display. In addition to optical layers, such as diffusers and polarizers, increasing the air gap between the LEDs and panel glass will better distribute the light evenly through the panel. The number of dimming zones is directly proportional to the amount of halo artifact created by the system, as more zones will better match the display’s pixels and reduce the unwanted illumination of dark pixels.

An automotive local dimming backlight module and LCD display system have similar but slightly modified components when compared to a traditional globally dimmed backlight system. The major components include a timing controller (TCON), LED drivers and LED backlight unit, as shown in Figure 3.

The TCON will convert a video input, such as Open Low-Voltage Differential Signaling (LVDS) interface, LVDS or Red-Green-Blue, into control signals for the source and row drivers in the LCD panel. In a local dimming system, the TCON is specialized to include the internal processing and histogram calculations for the individual zone dimming, with a Serial Peripheral Interface output to control the LED drivers.

Traditional edge-lit backlight units contain 20 to 80 LEDs along the edge in conjunction with light guides, diffusers and polarizers. The locally dimmed LED backlight unit will contain anywhere from 96 to as many as 1,000 LEDs or more uniformly dispersed in a grid, directly behind the LCD to be illuminated. The LEDs are all individually (or sometimes grouped together as two or four LEDs in series or in parallel) controlled by a single low-side channel from the LED driver.

Instead of the single four- to six-channel low-side LED driver used in edge-lit architectures, a local dimming architecture uses multiple 16- to 48-channel LED drivers to achieve the higher zone counts. Multiple LED drivers can have the control signals daisy-chained together to provide an easily controlled and scalable approach based on the number of zones needed.

Figure 3: The components of a local dimming system for automotive displays

Read part 1 of this article, "A better automotive display from pixel to picture with local dimming."