Most of today’s automotive vehicles use some level of autonomy. The Society of Automotive Engineers (SAE) defines five levels of autonomy, from level 0 to level 5 (Figure 1). In this technical article, I’ll discuss the DC/DC power-supply needs for each autonomy level. I hope that design engineers looking to understand the power-supply challenges and requirements of automotive applications at various autonomy levels will find this guide helpful. 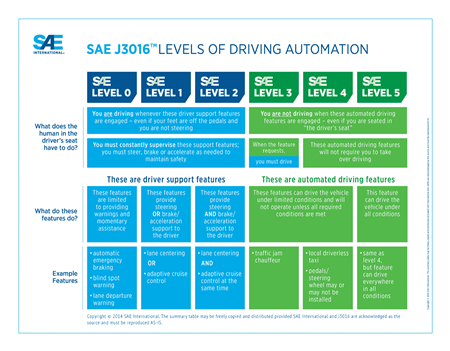 Rear view cameras are an ADAS feature often found in level 0 and 1 autonomy. Mostly powered directly from the car battery and sometimes tied to the rear light assembly, rearview cameras require small DC/DC converters like the LMR34206-Q1 and LMR34215-Q1 with good noise reduction and low ripple. The sensor inside the camera module is highly sensitive to noise from dark currents created by heat, but also to noise injected from or through the power supply. A compact and low-noise low-dropout regulator (LDO) like the LP5907-Q1 can help manage unwanted noise in the system.

Forward-facing camera systems, also present in level 1, use machine vision to identify objects and perceive the road situation ahead of the car as the vehicle travels at higher speeds, requiring higher data-processing speeds than rearview cameras and lower levels of latency. As such, these systems need more software and more power for data processing, requiring high-efficiency converters like the LM62440-Q1 or LM61440-Q1 to help reduce thermals and lower electromagnetic conduction.

Level 2 involves partial automation and includes the control of two vehicle movements at the same time, e.g. steering and accelerating. Most high-end (and some mid-range) vehicles are at this level. As the number of sensors grows, so do the power needs.

Figure 1 shows a typical block diagram of a radar power management system, which comprises a small electronic control unit (ECU) that needs a power supply with a low bill of materials, such as the LM63625-Q1, and a second-stage power-management integrated circuit (PMIC) such as the LP87702-Q1. These device families are scalable across various power levels for different radar types (such as corner, front and side), and since they have the same pinout and footprint, you can use them across a variety of designs.

Level 3 involves conditional automation. The driver can now let go of the steering wheel, accelerator and brakes, but some road conditions will need the driver to resume control. Level 3 increases the processing needs of the ECUs used in autonomous systems, as vehicles now have to integrate information from various sensors to make decisions (a process called sensor fusion). As the power increases, a potential power component choice for a forward-facing camera or cascaded radar could be the LM61460-Q1 buck converter, as it can support the increased need for processing power.

Automakers use varying quantities and types of sensors to implement different levels of autonomy; this often means that the processors need scalability in order to meet additional performance needs, and flexibility as power requirements change. In such instances, you might not be able to support these power needs with a single PMIC, and will require smaller and more flexible products. The TPS628501-Q1 and TPS628502-Q1 come in a small-outline transistor (SOT)-583 package, but have tight output tolerance and control loops to support fast-acting transients for data processing and low latency.

Level 4 is called high automation; the car now works with features of full autonomy. Although the driver can take control of the vehicle, the car is capable of performing various maneuvers without driver intervention. The final level of autonomy, level 5, is defined as full autonomy, where the vehicle has full control and no conditions exist where the driver (now essentially a passenger) can operate the vehicle. Levels 4 and 5 both require the highest level of sensor data and incorporate lidar, which offers a 3D map of the environment and provides high quantities of data. Should lidar or radar fail for any reason, the vehicle will go into “limp home” mode and use other sensors as backup.

For such high-power applications, consider the LM61495-Q1. This is one device in a highly integrated converter family which is pin compatible and supports 6 A to 10 A to supply the system requirements. For even higher levels of power, a device like the LM5143-Q1 can support in excess of 20 A, and multiple phases, helping support the power needs as well as cancelling noise and reducing component count.

As the level of autonomy increases so does the power needs of the system, this will potentially mean new types of power devices and architectures. Close consideration should be paid also to the system sensitivity to noise, size and cost.