Processing the advantages of zone architecture in automotive

Think of a passenger car as a collection of electronic control units (ECUs) that are distributed across the length and breadth of the car and talk to each other using different networks. When adding more advanced automotive electronics for vehicle-to-everything (V2X), automated driving and vehicle electrification, the number of ECUs increases and the amount of data exchanged grows.

In a domain architecture, ECUs are categorized into domains based on their function, but the zone architecture is a new approach that classifies ECUs by their physical location inside the vehicle, leveraging a central gateway to manage communication. This physical proximity reduces cabling between ECUs to save space and reduce vehicle weight, while also improving processor speeds.

To understand the domain architecture, it helps to start by understanding the five domains in which ECUs are typically categorized based on function, as shown in Table 1.

The ECUs communicate and exchange data over networks that are specific and relevant inside their own domain while also communicating with ECUs in outside domains. Since the network in one domain could differ from the network in another domain, a gateway serves as a bridge.

Figure 1 illustrates a vehicle with a domain-based network architecture. In this figure, there is a central gateway module connected to the different domains in the car. Each domain performs several functions. The domain controller (such as the powertrain, for example) includes gateway function. This domain gateway helps communicate data across the ECUs supporting the relevant domain and from the domain to rest of the vehicle. 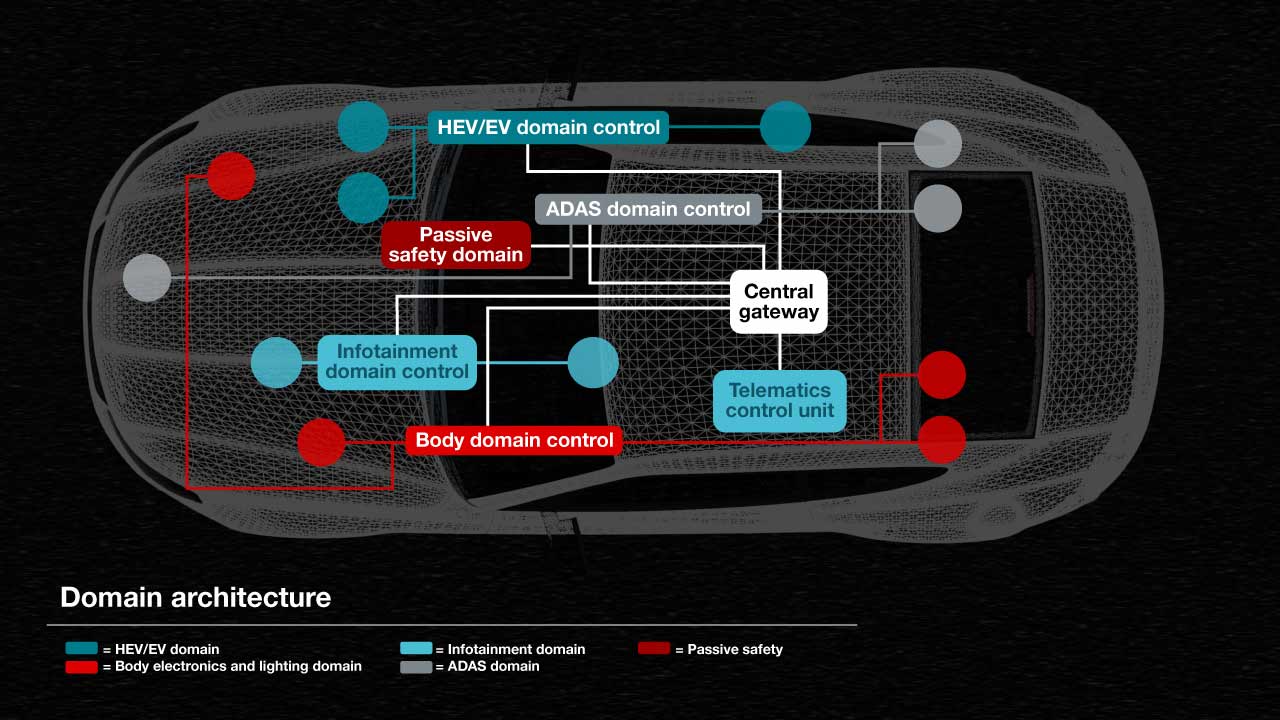 If the car was a room and the ECUs were people gathered in that room to discuss different topics, a domain architecture is equivalent to chaotically arranging those people, causing them to shout to others in their discussion groups across the room.

Figure 2 depicts the zone modules and associated zone satellite modules in different regions of the car, along with the central gateway and vehicle compute modules. TI’s Jacinto DRA82x processors for automotive are tailor-made for gateway systems and include features to move data in the vehicle safely and securely. The DRA82x processor family includes devices with an integrated PCIe switch and Gigabit TSN Ethernet switch, which can be used in compute platforms, central gateways and zone modules.

It is possible to use a low-bandwidth network such as CAN for communication between the different zone modules and the central gateway/compute modules. However, high-speed networks such as Ethernet or PCIe are also a good choice because they provide high reliability and smooth operation in a range of automotive temperatures.

Power advantages of a zone architecture

Figure 3 shows the concept of power distribution in a zone architecture, where you can see the integration of each zone’s power distribution module function with the zone module that manages the network traffic and local zone satellites. 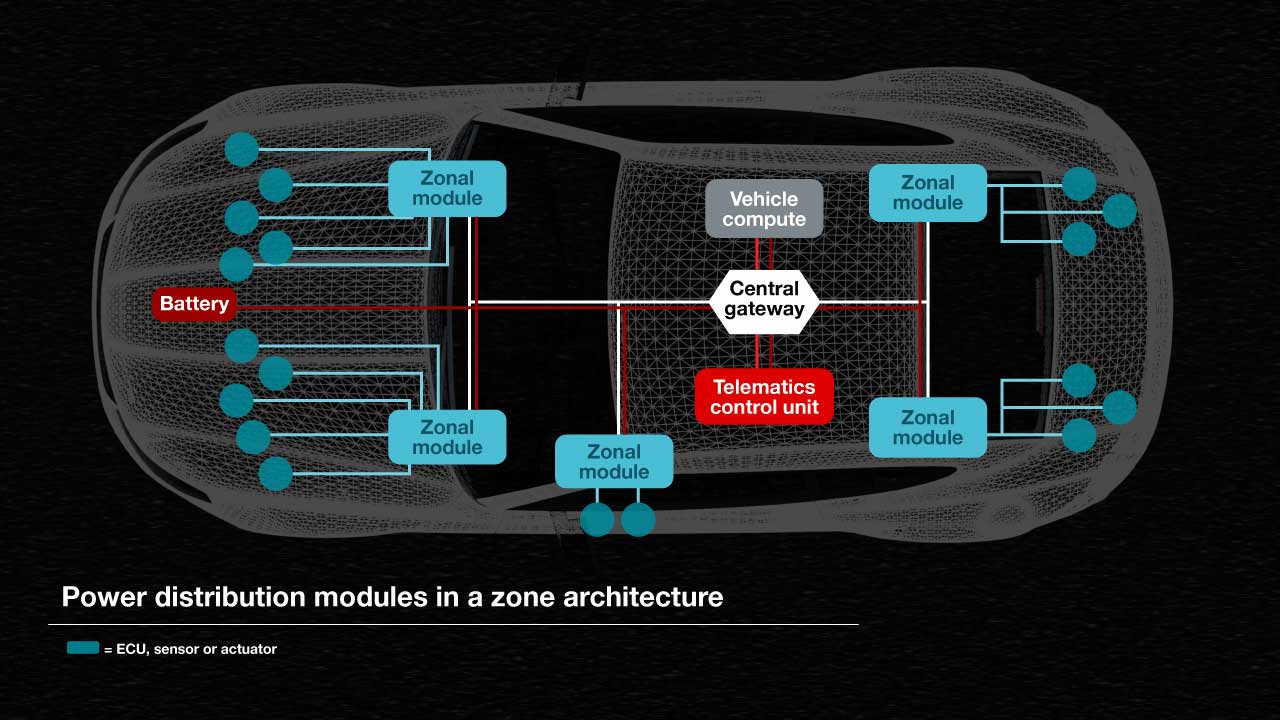 Another advantage is that power distribution module designs can be similar throughout the vehicle. Using semiconductor solutions such as smart high-side switches instead of mechanical relays and fuses enables a more sensible power distribution module design, locating modules closer to the loads instead of farther away so that they are more accessible for replacement.

With the increase in the number of ECUs, the vehicle network has evolved into a domain architecture where the ECUs are grouped based on a related function that each ECU is performing. This has increased network complexity, however. Automotive vehicle designers are now considering the use of a zone-based architecture, which offers the advantage of having a vehicle compute module to control vehicle functions.

Taking advantage of this new network architecture enables you to optimize the vehicle power architecture, specifically considering installation of the local power distribution module in each zone along with the zone module that manages network traffic and zone satellite modules. The new zone architecture will ultimately lead to a harness cable weight reduction, which results in higher fuel efficiency for internal combustion engine-based vehicles and higher driving ranges for battery-powered electric vehicles.