With increasing competition between electric vehicle (EV) manufacturers to develop models with lower cost and longer drive range, power system engineers are under pressure to reduce power losses and improve traction inverter system efficiency, which can improve driving ranges and provide a competitive advantage. Efficiency relates to lower power losses, which affect thermal performance and in turn system weight, size and cost. Demand to reduce power losses will continue with the development of inverters that have higher power levels, especially as the number of motors per car increases, and trucks migrate to pure EV.

The isolated gate-driver integrated circuit (IC) shown in Figure 1 is an integral part of a traction inverter’s power delivery solution. The gate driver provides low- to high-voltage (input to output) galvanic isolation, drives the high- and low-side power stages of the SiC or IGBT-based three-phase motor half bridges, and enables monitoring of and protection against various fault conditions. 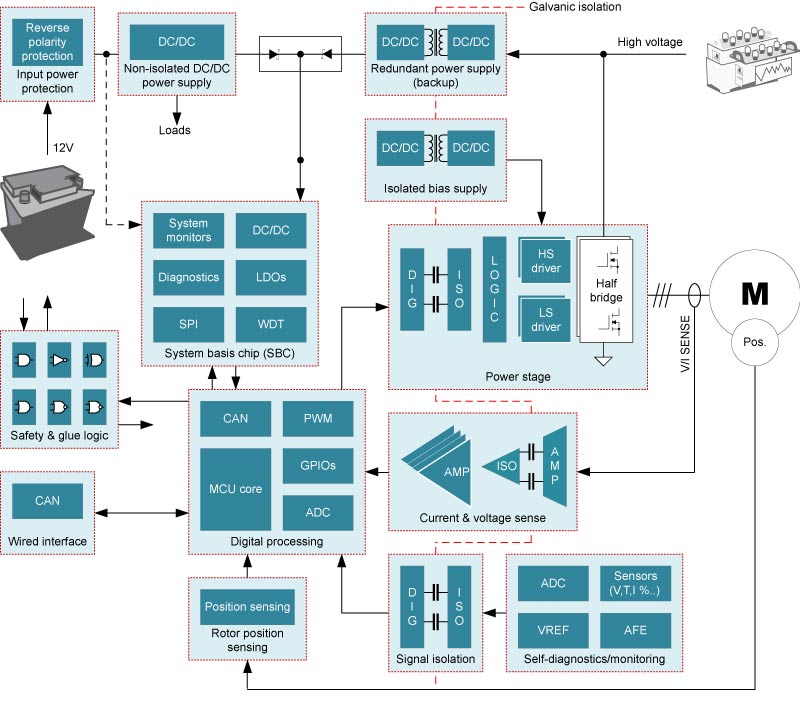 For SiC MOSFETs especially, the gate-driver IC has to minimize switching and conduction losses that include turnon and turnoff energy. MOSFET data sheets include a gate-charge characteristic, and on that curve you’ll find a flat, horizontal section called a Miller plateau, shown in Figure 2. The more time a MOSFET spends between the on and off states, the more power is lost. 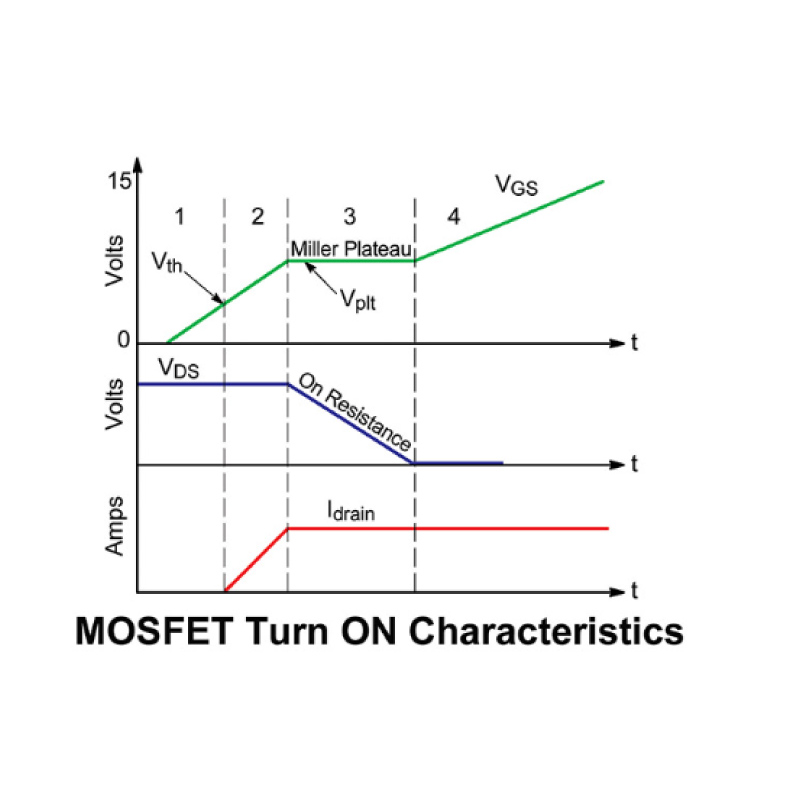 When the SiC MOSFET switches, the gate-to-source voltage (VGS) passes the gate-to-source threshold (VGSTH), is clamped at the Miller plateau voltage (Vplt), and stays there because the charge and capacitance is fixed. Getting the MOSFET to switch will require the addition or removal of a sufficient gate charge. The isolated gate driver must drive the MOSFET gate with high current in order to add or remove the gate charge in order to reduce power losses. Equation 1, which calculates the required SiC MOSFET charge that the isolated gate driver will add or remove, shows that the MOSFET gate current is proportional to the gate charge:

where IGATE is the isolated gate-driver IC current and tSW is the turnon time of the MOSFET.

For ≥150-kW traction inverter applications, the isolated gate driver should have >10 A of drive strength to switch the SiC FET through the Miller plateau at high slew rates and take advantage of the higher switching frequencies. SiC FETs have a lower reverse recovery charge (Qrr) and a more stable over temperature on-resistance (RDS(on)) that enable higher switching speeds. The less time the MOSFET stays in the Miller plateau, the lower the power losses and self-heating.

TI's UCC5870-Q1 and UCC5871-Q1 are high-current, TI Functional Safety-Compliant 30-A gate drivers with basic or reinforced isolation and a Serial Peripheral Interface digital bus for fault communication to a microcontroller. Figure 3 compares SiC MOSFET turnon between the UCC5870-Q1 and a competing gate driver. The UCC5870-Q1 gate driver peaks at 39 A and maintains 30 A of current through the Miller plateau, enabling much faster turnon, which is the preferred result. The faster turnon is also evident by comparing the blue VGATE waveform ramp between the two drivers. At the Miller plateau voltage of 10 V, the UCC5870-Q1 has 30 A of gate-driver current, while the competing device’s gate-driver current is 8 A. 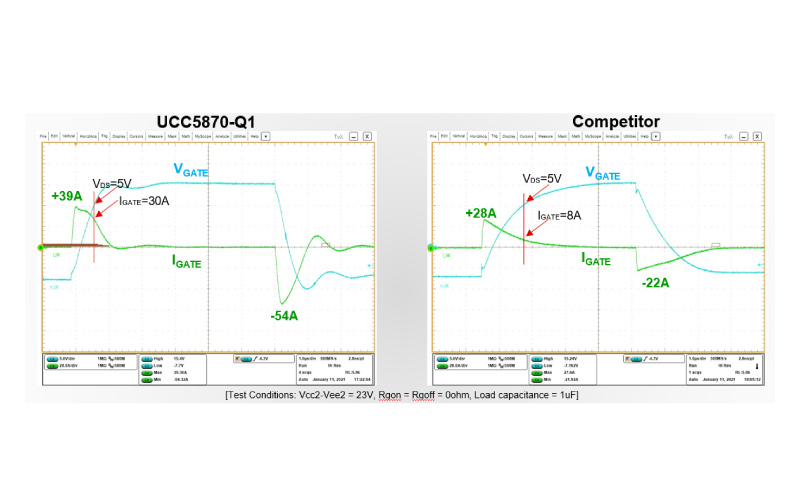 Figure 3: Comparing TI’s isolated gate drivers vs. a competing device in turning a SiC FET on 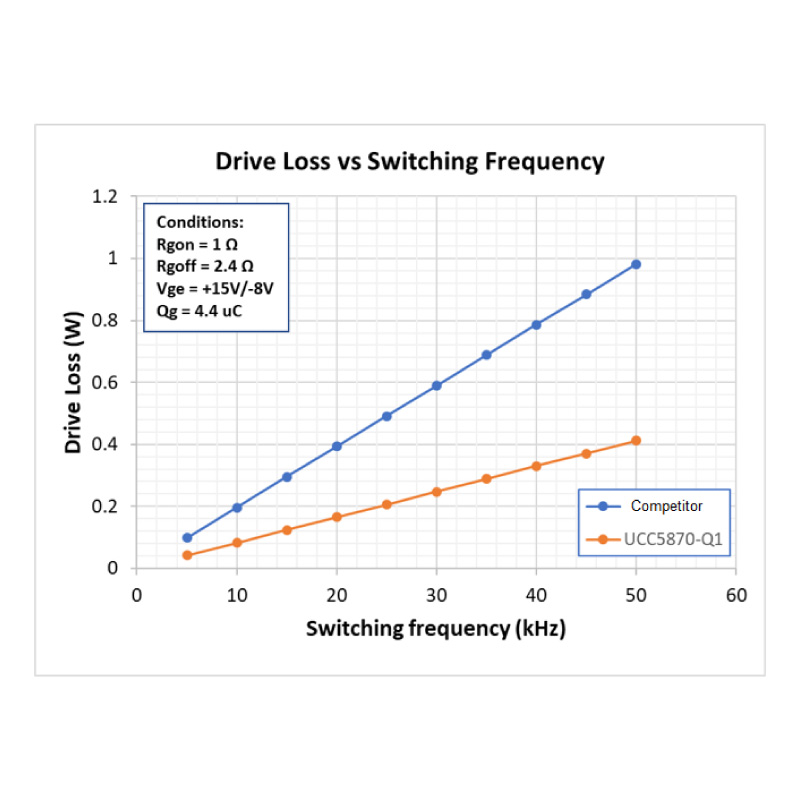 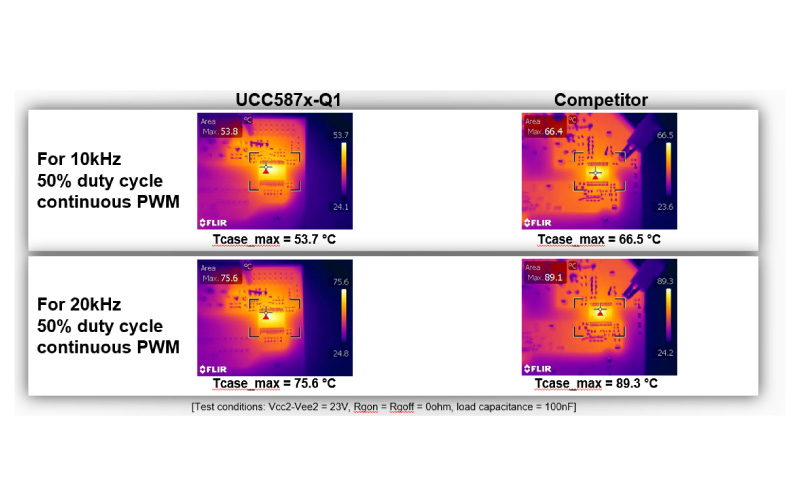 Figure 5: Thermal dissipation of the UCC5870-Q1 vs. a competing gate driver driving a SiC FET