DLP technology is set to light up stages worldwide

A new optical reference design from TI demonstrates that stage lights using DLP technology are comparable with traditional spotlights in terms of the brightness using just a single DLP chipset to deliver up to 15 kL of monochrome light to the stage. After brightness, systems leveraging DLP technology surpass existing designs by offering programmability, versatility, reliability and scalability - all while reducing operating costs.

Traditional spotlights cast shapes and patterns by projecting the light through metal or glass cut-outs, known as a ‘GOBO,’ from ‘goes before the optics’. Every time a different pattern or shape is needed, the GOBO must be changed either manually or with motors. DLP technology enables digitally programmable stage lights to display innumerable shapes, patterns and even video effects. DLP technology can change the projected light pattern instantaneously, without the delay of an electrical motor. With DLP technology, there are no GOBO motors to maintain, which can lower your costs over time.

A stage lighting system leveraging DLP projection capabilities will consist of a digital micromirror device (DMD), digital controller chip, and any ancillary chips such as power supply devices along with illumination and projection optics. The optical reference design demonstrates an architecture that is a scalable to using multiple light sources and is compatible with incandescent lamps, LEDs and lasers.

For a performance or concert requiring monochromatic white light, a spotlight with DLP technology can scale upwards to 15,000 lumens. Full-color stage lighting systems can project up to 10,000 lumens. 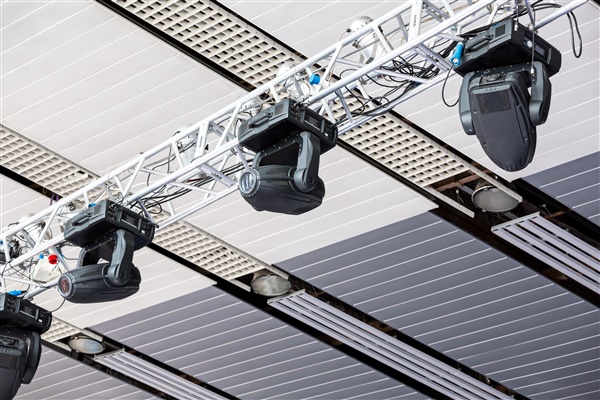 More advanced spotlights using DLP technology can be complementary to traditional stage lighting methods. For example, mechanical GOBOs can be employed in conjunction with a monochromatic digital light. In this type of application, translucent colored GOBOs could function as the color management subsystem for a white monochrome, fully programmable stage light system. The appropriate colored GOBO filter could be switched in and out as needed by the application. See more ways TI is playing in the stage lighting space on the Industrial Strength blog.

To learn more about how DLP technology is expanding the design space for stage lighting effects, visit our lighting overview page. Visit the DLP Products E2E community to request more information about the optical reference design.