How Avegant is changing the entertainment experience with head-mounted displays

When Avegant co-founder Edward Tang and his colleague first decided to make a head-mounted display, they knew the technical challenges would be substantial.

“We wanted to make a sleek device and deliver a big-screen experience,” Tang said. “It had to be elegant – something that consumers would actually wear.”

The resulting consumer product, called the Glyph, resembles a set of studio headphones that connects to a smartphone. Within the headband two tiny displays give viewers a rich multimedia experience while still allowing them to see the real world around the edges of the display. 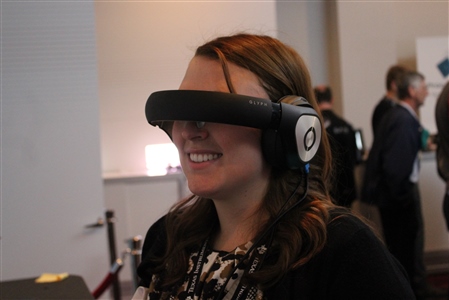 Tang said when it came to determining the Glyph’s key display components, incorporating TI DLP® Pico™ display technology was an easy fit. After all, Tang and many of his Avegant colleagues were already very familiar with our technology while studying microelectromechanical systems (MEMS) at the University of Michigan.

By 2012, the first Glyph prototype was ready. It was the size of a washing machine, replete with exposed wires and one major shortcoming – it wasn’t something you could wear yet. Instead, users had to press their heads against a pair of lenses to get the full experience.

Still, the device was a very convincing proof of concept, and compact, lightweight prototypes were later made. TI invited Avegant to showcase the updated Glyph prototype at the Consumer Electronics Show (CES), where it received numerous awards and media accolades.

“Even with the prototype, we realized we had an image quality never seen on a device like this before,” Edward said. “That’s when we knew we had something we should commercialize.”

“There are many nice attributes in the DLP solution, including a fill factor that’s so high that the human eye cannot see any pixelization using the Glyph,” Edward said. “The low latency is another great benefit.”

Tang said it has been really interesting to witness how users have already found new applications for the Glyph beyond media consumption. He noted how the Glyph’s head-tracking capabilities and ultra-sharp resolution have made it a compelling choice for drone pilots, creating a unique and unparalleled first-person view experience.

“Our first focus has always been people who want super high-quality entertainment on the go,” Tang said. “But I think we are just scratching the surface for how people will use the device. ”

New to the Avegant Glyph? Learn more in the video below.