Taking a look inside the DLP® NIRscan™ Nano Evaluation Module

As engineers and developers, our jobs are to figure out the best way to put stuff together. From skyscrapers to integrated circuits, if it works well it’s because it’s engineered well. But who among us doesn’t daydream of taking things apart? Most of our first engineering memories are from when we were kids deconstructing something that looked complicated (not to mention expensive).

With that in mind, we wanted to take a look inside the DLP NIRscan Nano Evaluation Module (EVM), and we’re doing it the old fashioned way – by pulling it apart.

Please note that any disassembly of the optical engine voids the warranty on the NIRscan Nano EVM system and removing the cover on the optical engine allows dust and smudges to collect on the optics affecting its performance. Also, removing the cover might move the optics, slit, and detector out of alignment requiring factory realignment and recalibration. Removing the slit, Indium Gallium Arsenide (InGaAs) detector and DLP2010NIR will require the system to be realigned and recalibrated at the factory.

In short, do not try this at home.

Let’s begin with a quick overview. DLP spectrometers replace the traditional linear array detector with a digital micromirror device (DMD) for wavelength selection and a single point detector. By sequentially turning on a set of columns pertaining to a particular wavelength of light, the light is directed to the detector and captured. By scanning through a set of columns across the DMD, an absorption spectrum can be computed.

In this picture, you can see the major components of the DLP NIRscan Nano EVM: 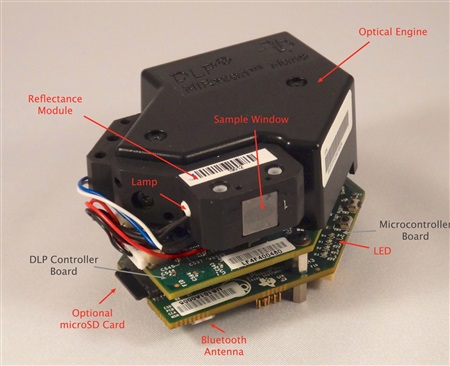 Removing the cover to the optical engine reveals the DMD and Detector board: 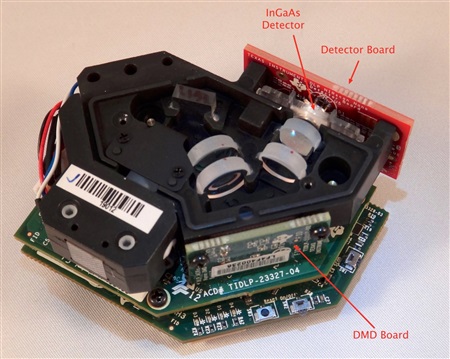 Now if we removed the Reflectance module, you can see the slit: 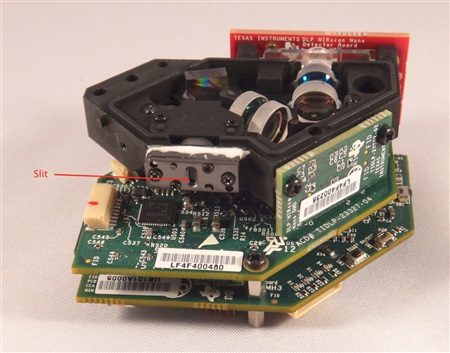 Now that we’ve gotten inside, let’s take a look at how the light is manipulated.

The light reflected from the sample is gathered by the Collection lens and focused into the optical engine through the input slit. The slit size is chosen to balance wavelength resolution with signal-to-noise ratio (SNR) of the spectrometer. This spectrometer uses a 25 μm wide by 1.69 mm tall slit. The light that passes through the slit is collimated by the first set of lenses, passes through an 885-nm long wavepass filter, and then strikes a reflective grating. This grating, in combination with the focusing lens, disperses the light into its constituent wavelengths (multi-colored light rays). The focusing lenses form an image of the slit at the DLP2010NIR DMD. Different wavelengths of this slit image are spread horizontally across the DLP2010NIR DMD. The optical system images 900 nm wavelengths to one end of the DMD and 1700 nm to the other end, with all other wavelengths sequentially dispersed in between. 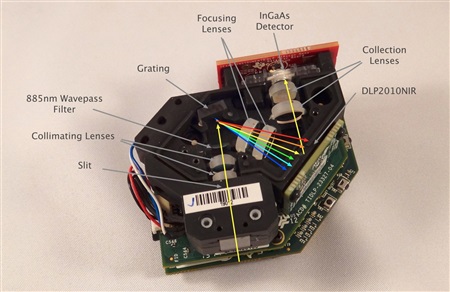