Augmented reality (AR) head-up displays (HUDs) are the next big thing in the automotive industry. The technology has finally advanced to the point where automakers and Tier-1 suppliers are actively developing AR windshield HUDs.

The idea behind AR is to overlay digital information on top of the real world, enhancing driver situational awareness and improving the driving experience. The larger the FOV and the longer the virtual image distance, the better. 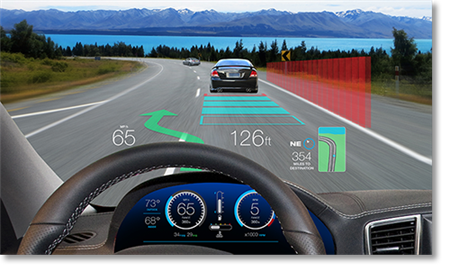 Two of the biggest challenges in designing an AR display have always been brightness and solar load. An AR display needs to be as wide and bright as possible, which requires a lot of light from the imager. You also need to project images out as far as possible onto the road. Today’s HUDs have an FOV in the range of 7 to 8 degrees or less and can “project” images out 2.0 to 2.5m on the road. These images appear to float over the hood of the car. In an AR HUD, you want to project the image further out, allowing the images to truly augment and interact with the driver’s field of view.

To support longer virtual image distances, it’s not uncommon to design a system with 25 to 30x magnification, but that has the unfortunate side effect of focusing the solar load (i.e. the sun’s energy) onto a very small area of the HUD’s imager panel which can create sever thermal challenges. This high level of magnification effectively moves the imager panel closer to the focal point of the HUD optics, resulting in a higher concentration of solar energy per unit area, as shown in Figure 2.

Note, that’s it’s not the ambient temperature that’s the problem, but the focusing of the sun’s energy coupled with more light entering the system (due to the larger glare trap of an AR HUD) that creates the thermal challenge.

DLP® technology’s unique intermediate diffuser screen architecture enables you to design HUDs that can withstand the thermal loads caused by the magnification of sunlight. As you can see in Figure 3, a DLP technology based HUD projects the image onto a diffuser screen, which the HUD optics then magnify and project onto the windshield for reflection back to the driver. In a TFT HUD, the TFT panel is attached to the HUD optics, replacing both the diffuser screen and supporting electronics.

To better understand why a diffuser screen provides an advantage, let’s look at the physical properties of a diffuser screen vs. a traditional TFT panel (Figure 4). The two primary advantages are a higher operating temperature and, more importantly, that the diffuser screen simply does not absorb much of the sun’s incoming visible spectrum. (The infrared [IR] and ultraviolet [UV] portions of the spectrum are easily filterable.)

The incoming solar load is focused onto the diffuser by the HUD optics, just like it would be for a TFT panel. But in the case of a diffuser, the transmitted light is actually spread out, eliminating the magnification effects of the HUD optics and making for a much simpler thermal problem to manage. With a TFT panel, the sun’s energy is absorbed and can easily increase the panel’s operating temperature above its maximum rating. It’s this solar load advantage – along with superior brightness, contrast and color gamut – that are enabling automakers and Tier-1 suppliers to design and bring to market next-generation AR HUDs.