DLP® technology is gaining popularity in automotive applications such as augmented reality (AR) head-up displays (HUDs) and one of the primary reasons is the bright, vivid colors that it can deliver. To better understand how color plays a role in AR HUDs (like the one depicted in Figure 1), I would like to introduce the concepts of color saturation and color gamut. 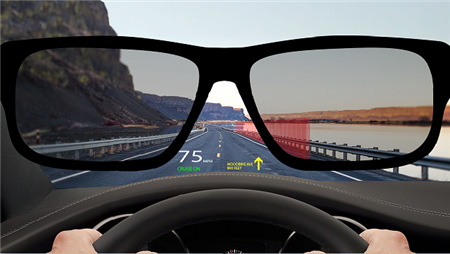 Color saturation refers to the intensity of color in an image. Looking at Figure 2, you can easily tell which color is more saturated. The less saturated the color, the duller it appears. In technical terms, saturation is the expression of how pure a color is, defining the color in terms of its composite wavelengths. When a color is fully saturated, it contains just a single wavelength and is considered the purest form of the color. In fact, the Helmholtz-Kohlrausch effect describes how the more saturated a color is, the brighter it is perceived.  Another interesting aspect of color saturation is how it affects reaction times. A study titled “Capturing User Attention with Color” indicated that the more saturated a color is, the more quickly an observer will react to that color, particularly for red (this is one of the reasons why many warning signs use the color red).

To reproduce a color accurately and consistently from one display to another requires measuring it quantitatively. This is where the concept of color gamut comes into play. A color gamut represents all the different colors that can be produced by a given system. Different color gamut standards such as International Telecommunication Union-Recommendation (ITU-R) Rec. 709, Rec. 2020 and National Television System Committee (NTSC) define differing amounts of the color spectrum that must be reproduced in order to be compliant. These standards assign specific color coordinates to each color that uniquely define that color and ensure that a color reproduced on one display looks identical on a different display. The color gamut defined by each standard is depicted as a triangle on an XY chromaticity diagram, as shown in Figure 3. These triangles show the peak red-green-blue (RGB) coordinates connected by straight lines.

The larger the area inside the triangle, the more colors a standard is capable of displaying.  In automotive applications, the NTSC standard is often used to define the range of colors that can be reproduced and a display’s performance is commonly referenced as a percentage of the NTSC color gamut. For example, liquid crystal display (LCD) displays are 60% NTSC or less, which means that they can only reproduce a maximum of 60% of the colors in the NTSC color gamut. 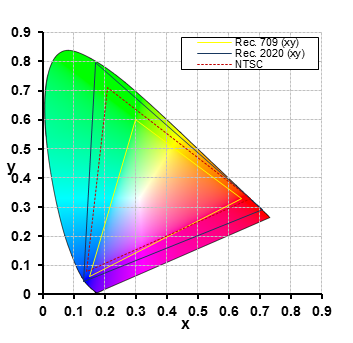 At the heart of DLP technology is the digital micromirror device (DMD). DMDs include an array of hundreds of thousands to millions of highly reflective aluminum micromirrors that switch at extremely high speeds, mixing the three RGB primary colors into bright, vivid images.  One of the performance advantages of DLP technology is that the DMD switching characteristics do not vary with temperature, which means color reproduction and image quality do not de-rate with temperature. You get the same high color saturation levels at -40°C as you do at 105°C. 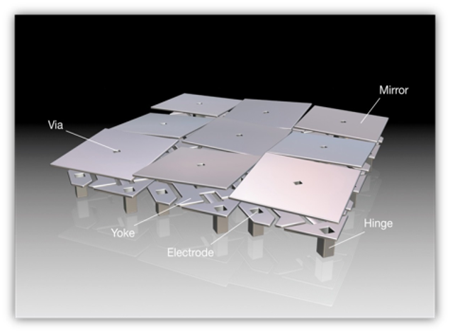 Being a reflective technology, DLP technology delivers higher saturation levels compared to competing automotive technologies such as LCD, which uses a white backlight and color filters to reproduce colors. With DLP technology, whatever saturation level your light source starts out with is the saturation level that is reproduced. Taking full advantage of highly saturated solid-state light sources including light-emitting diodes (LEDs) and lasers, DLP technology achieves a red saturation of 91% with LEDs and 100% color saturation with lasers, resulting in wide color gamut support (for example, TI’s latest DLP3030-Q1 automotive-qualified chipset supports 125% NTSC with LEDs and 172% with lasers).  With this level of saturation and color gamut support, DLP HUDs generate bright and vivid images, which deliver a better visual experience while driving.