Philippe Dollo
Other Parts Discussed in Post: AM3358, DLP2000 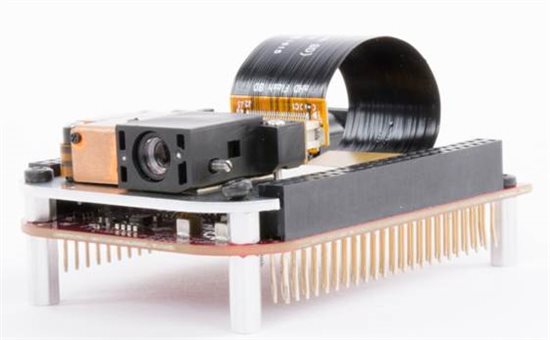 The complete EVM with included optical engine can be seen in Figure 1. Out of the box, it has built-in support for the Sitara™ AM3358 processor-based BeagleBone Black, thanks to host-side device drivers that are readily compatible with the system. Using the BeagleBone Black’s large array of general-purpose input/output (GPIO) pinouts, the EVM has no trouble outputting a full 24-bit RGB888 picture with pins to spare. This capability ensures good color quality and ease of use, making the BeagleBone Black a great target platform for the development of smart home applications.

While not boasting as many GPIO pinouts as the BeagleBone family, the second and third generation versions of Raspberry Pi (like the one featured in Figure 2) offer strong support for accelerated graphics. This makes it a great alternative for developers interested in performance-intensive applications. The DLP2000 chipset included on the DLP LightCrafter Display 2000 EVM sports a good contrast ratio of 1000-to-1 and complements the Raspberry Pi’s graphical fidelity. Although the Raspberry Pi is not supported out of the box with drivers, the DLP LightCrafter Display 2000 EVM’s exposed pinouts make it easy for you to develop your own interfaces to combine the systems together.

For example, you can change the DLP LightCrafter Display 2000 EVM’s video output configuration to RGB666. This, along with the introduction of a new software-defined I2C bus on the Raspberry Pi, makes it possible for the host processor to host the EVM despite its smaller GPIO pin count. Furthermore, the “VINTF” line on the EVM allows any host processor to use its customized I2C level (such as 3.3V or 5V) to control the system. We’ve already seen developers in the TI E2E™ Community and online start to develop solutions for the Raspberry Pi. Like the Raspberry Pi, other host processors can be interfaced with the LightCrafter Display 2000 EVM to suit a variety of project needs.

Thanks to its accessibility and versatility with embedded host processors such as the BeagleBone Black and Raspberry Pi, the DLP LightCrafter Display 2000 EVM was voted best “New Product of the Year” of 2017 by the element14 community. Want to see what all the buzz is about? Watch this video or visit our website to learn more.