With the expansion of the Internet of Things (IoT), the need for wireless sensor nodes is growing. Many different sensor types are being integrated into IoT networks: temperature, humidity, pressure and ambient light, just to name a few. As the desire to add sensing abilities to IoT networks increases, so does the importance of a sensor node’s battery life.

To reduce cost and inconvenience associated with battery maintenance, it makes sense to ensure that every wireless sensor node has as long a battery life as possible. Most typical wireless sensor nodes employ a duty-cycled approach to extend battery life. This is a scheme whereby the node powers up, records a measurement from the sensor, transmits that data wirelessly to a central hub or gateway and then turns itself off, either by using a low-power mode or load switch. The main factors that affect overall system battery life are the on-state duration, on-state average current, off-state duration and off-state average current. 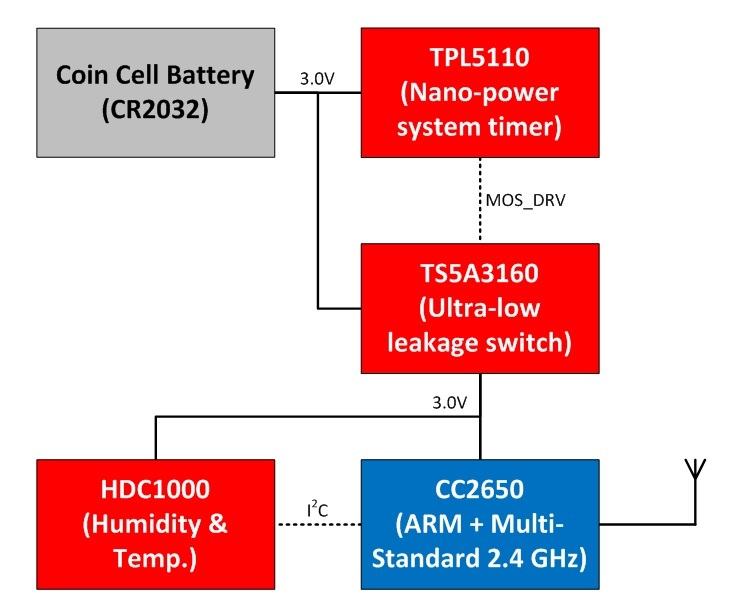 This reference design optimizes overall system battery life, since the nano-power system timer and ultra-low leakage load switch reduce the off-state average current to tens of nanoamps, which is lower than most typical MCU shutdown modes. In addition, the wireless MCU and humidity sensor used in this reference design are extremely low power, which reduces the on-state average current to less than 5mA. Since the sensor measurement and wireless data transmission only take approximately 30ms to complete, the overall estimated system battery life is 10.5 years, when measuring once per minute.

This duty-cycled architecture using a nano-power system timer makes wireless sensor nodes a practical reality as IoT networks become more widespread. With system battery life longer than the typical shelf life of the batteries themselves, this TI Design reference design shows how practical wireless sensor nodes could be for a variety of new applications.