Cogging torque in brushless direct current (BLDC) motors and permanent magnet synchronous motors (PMSMs) is caused by motor design aspects: the interaction between the permanent magnets (PMs) of the rotor and the stator slots. It is also known as detent or “no-current” torque. Many low-cost, simply constructed BLDC motors have higher cogging torque. In such motors, the cogging torque can be felt by manually turning the rotor shaft at a low speed. The rotor will align in a number of stable positions even when the machine is unexcited, resulting in a pulsating torque. This torque is position-dependent and its periodicity per revolution depends on the number of magnetic poles and stator slots. Because cogging torque can cause torque ripples and induce vibrations (particularly at light loads and low speeds), its reduction is usually a major design goal.

You can reduce the amplitude of cogging torque by selecting a proper slots/pole ratio during machine design. You can also substantially reduce cogging-torque amplitude with motor-design approaches such as reducing the slot opening, shaping the magnet pole, skewing the magnet or slot, or increasing the air-gap length. All of these efforts will come at the expense of added complexity in motor construction and some loss of output torque, however.

At very low speeds, high cogging torque can cause relatively large speed fluctuations, even causing the motor to stop or move in discrete increments. Cogging torque reduction is very important for low-velocity applications like robotics and servo. In servo control, precise positioning is impossible with a traditional proportional-integral controller due to the nonlinearity of cogging-torque ripple. When a motor spins at high speeds, cogging torque ripple creates high-frequency speed fluctuations that generate acoustic noise and vibration.

Figure 1 shows a typical cogging-torque waveform of a 24-slot 4-pole PMSM with a rated torque of 15-N m. 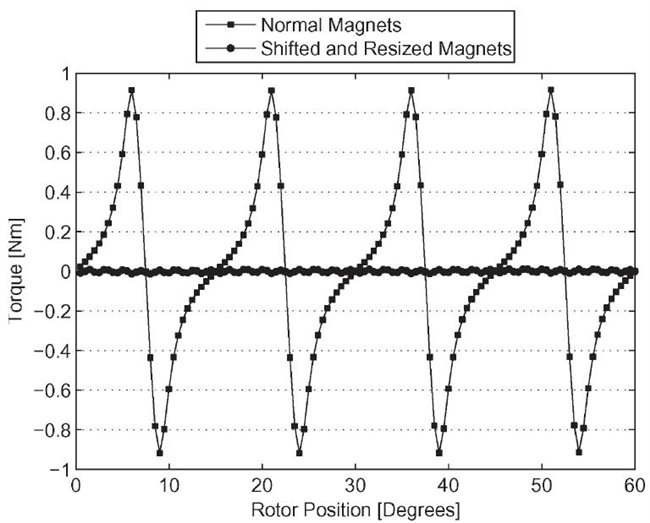 Because most low-cogging-torque motors come with added cost due to machine design complexity, an alternative approach to minimize the effect of cogging-torque ripple amplitude is through drive control design using a compensation term in the control scheme.

Although several methods are available for the compensation of cogging torque, a common method used in servo drives is to initially put the system into “learn mode” to create a look-up table of cogging torque at various rotor angles for a full revolution. From the look-up values, applying a counteracting waveform with the correct frequency and phase relation to the actual cogging torque will result in amplitude reduction of the cogging torque.

Torque ripple-induced vibration in fans and blowers can become even more amplified because of other mechanical system components, creating acoustic noise. The effects of torque ripple are undesirable in some demanding motion control and machine-tool applications because they can lead to speed oscillations that deteriorate performance. In addition, torque ripple may excite resonances in the mechanical portion of the drive system producing the acoustic noise, and in machine-tool applications, leave visible patterns in high-precision machined surfaces. I recommend analyzing cogging torque for the application of high-precision position control, especially at low speeds.

Effect of torque ripple on acoustics and overall performance is discussed in this two part series. This knowledge can help in the selection of motors such as BLDC or PMSM, and semiconductor components such as sinusoidal motor controller or high performance microcontroller for FOC implementation and high bandwidth amplifiers for current sensing.