Adding imagination to your next-generation appliances

Every day we interact with human machine interfaces (HMIs). Some of these interactions are obvious, like when you touch the home screen on your smartphone or tablet, but the most common context for HMI is actually in industrial applications.

At the Appliance and Electronics World Expo earlier this year, more and more appliances – refrigerators, robot vacuums, cooking ranges and cooker hoods – added touch keys and LED animation to the HMI. This trend enables designers to make their products smarter and more modern, with user-friendly interactions.

Capacitive sensing deserves a lot of credit for making this technology possible. When designing for home appliances, the focus is on reliability, robustness and how to make the product more attractive. With the capacitive touch-based user interface with proximity sensing and LED animation reference design, you can implement innovative features in your appliances such as preset lighting patterns, lower standby power consumption and moisture immunity.

The reference design uses a single MSP430FR2522 microcontroller (MCU) with CapTIvate™ touch technology and advanced LED driver technology, as shown in Figure 1. The six capacitive touch I/O channels each have a specific purpose. In this particular design, three are used for wheel control, two are used for buttons and one is used for proximity sensing. This design demonstrates precise control even in the presence of grease or water spills. 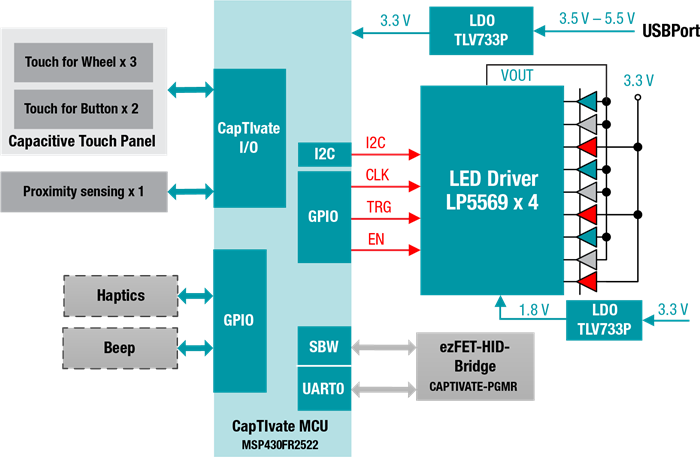 Another benefit of the MSP430™ CapTIvate MCU is that it can go into low-power mode, with only a few microwatts of standby power consumption, to help products meet strict energy standards or achieve extended battery life. The reference design provides proximity sensing to help the MCU come back to active mode from low power mode quickly and easily, the illuminated ring with LED animation provides an example for an attractive and innovative user interface in your next generation appliances. Take the example of a cooktop where water or grease is spilled, it is important to flawlessly control the furnaces at any time. The CapTIvate MCU’s very low standby power consumption enables the designer to meet the highest energy saving standards.

The LP5569 LED driver is equipped with internal secure random access memory (SRAM) memory for user-programmed sequences and three programmable LED engines. With the integrated engine, preset patterns are stored in program memory so that the LED driver can run a blinking or color pattern autonomously. This enables low system resource occupancy of the MCU when running LED animation.

With all of these features, a next-generation refrigerator or cooktop will be able to detect when a person is close to the appliance and wake up automatically. Users will be able to use their finger to lightly touch the surface and control settings such as temperature and lighting. The interactive panel will feature different colors and patterns that indicate settings such as the temperature of a freezer compartment or the power of a furnace. Many other applications can benefit from this reference design such as elevators, thermostats, robot vacuums or any other product with an interactive user interface.