3D scanning technology continues to rise as more industries find ways to take advantage of the usefulness of having 3D representations. The depth and detail provided by 3D measurements are extremely useful in areas of industrial inspection and factory automation and lead to improvements in failure analysis, increased productivity and profit.  Outside of these areas, applications for 3D scanning exist from the obvious, like the 3D printing space, to the relatively obscure, like dental scanning. 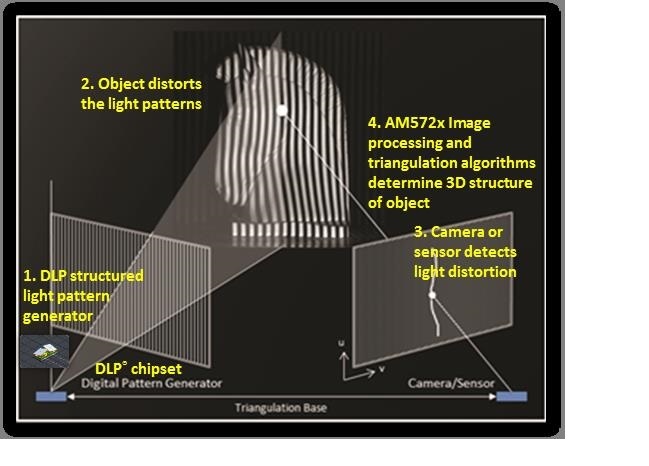 In all these spaces, the structured light approach offers advantages of improved depth accuracy, high resolution and high speed when compared with other 3D measurement technologies like stereoscopic vision and laser triangulation. While stereoscopic vision suffers from algorithm complexity and laser triangulation can require moving objects, structured light does not have either of these limitations. Based on TI’s digital micromirror device (DMD) technology, a DLP® technology structured light pattern generator can project precise patterns onto the to-be-measured object at a high speed and in a very reliable way. Also the ability of working with a wide wavelength range of light from near infrared, to visible, to ultraviolet provides great flexibility to adapt for many different types of materials and applications.

The usage of structured light for 3D scanning is nothing new. But as the use of 3D scanning becomes more popular and more industries are looking to leverage it, there are now requirements for and benefits from creating an embedded system with this technology. To satisfy the needs of embedded systems, power, size and cost become integral parts of the solution. This generally places constraints on the type of processor that can be utilized.