The robustness of this protocol enables connections to a motor-feedback system through a motor connection cable and simplifies the installation of an encoder system in a motor drive. SICK, a German company that sells sensors, owns and specifies the HIPERFACE DSL® digital protocol.

Some of the main advantages of HIPERFACE DSL are based on the opportunity for connection of the encoder:

You can use the HIPERFACE DSL protocol in two different interface circuit configurations, each with a different kind of connection cable:

A solution for the HIPERFACE DSL encoder interface

The major building blocks of this reference design are a two-wire bidirectional RS-485 physical interface with power over RS-485 and a HIPERFACE DSL-compliant encoder power supply with overvoltage, over-current and short-circuit protection.

Figure 3 is a simplified system block of a servo drive with a master interface to a HIPERFACE DSL encoder. 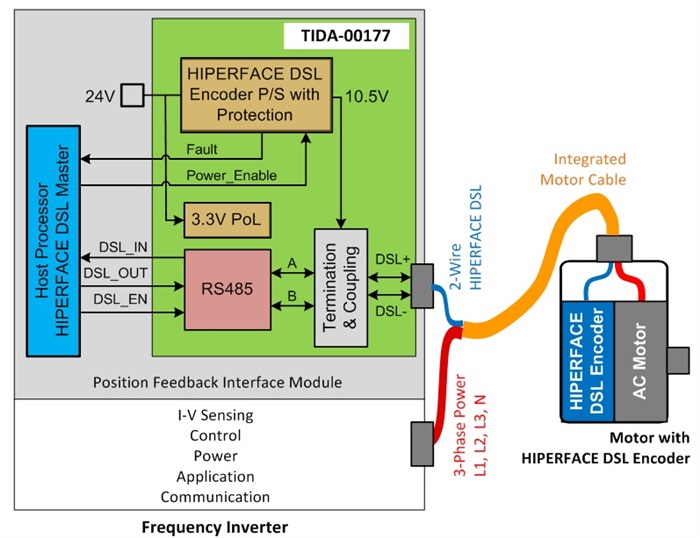 As a physical layer, HIPERFACE DSL uses a transfer in accordance with EIA-485 (RS-485). Valid RS-485 interface transceiver must comply with the constraints listed in Table 1.

Table 2 lists the specifications for the HIPERFACE DSL power supply.

The HIPERFACE DSL interface completes and closes the overview of the digital interfaces to motor position encoders.

In the next installment of this series, my colleagues and I will take a closer look at the interface to sin/cos encoders for high-resolution position interpolation.