The first part of this blog series provided an overview of the various types of motor-position encoders and their interfaces. Parts 2, 3 and 4 explained how to design an interface to absolute encoders with serial interfaces such as EnDat 2.2, bidirectional serial synchronous (BiSS) and HIPERFACE DSL. In this Part 5, I will introduce incremental sine/cosine (sin/cos) encoders with analog output and outline the design of an electromagnetic compatibility EMC-compliant interface.

Sin/cos rotary or linear encoders enable high-resolution position measurement. The high-resolution position is encoded into two 90° phase-shifted sinusoidal differential signals A+, A- and B+, B-, where the number of sinusoidal periods over one mechanical revolution equals the line count of the sin/cos encoder. A further differential analog output is the reference-marker signals R+ and R-, which allows for absolute-angle position detection. Figure 1 shows the output signals A, B and R, where A, B and R represent the differential signals of A+ minus A-, B+ minus B- and R+ minus R-, respectively. 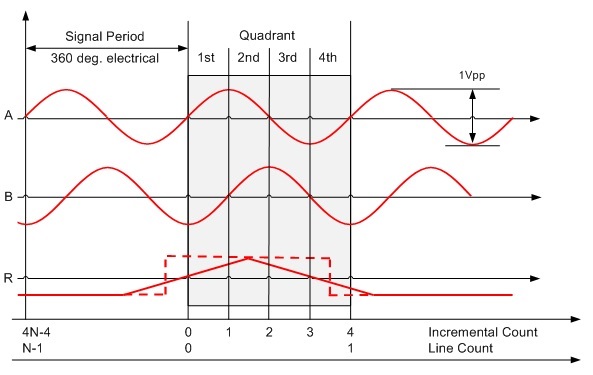 Figure 1: Output voltage signals A, B and marker R of sin/cos encoders with N line counts per revolution

Let’s have a closer look at the typical electrical specification of sin/cos encoder’s output signals, as they are an important criterion for the specification of the analog components of the interface design.

The differential output signal amplitude is either 11µA-pp, or more commonly 1V-pp, with a typical 2.5V DC offset.

The frequency of the sin/cos encoder’s differential output signal, A and B, depends on the line count of the encoder as well as the mechanical speed, as outlined in Equation 1:

where N is the sin/cos encoder’s line count and v is the mechanical speed in revolutions per minute. Table 1 lists typical examples for 1Vpp sin/cos encoders.

Now let’s have a look on how you decode the angle position from these output signals, as this is important for the system architecture of the interface design

Two comparators, one for sine and one for cosine, generate digital quadrature-encoded signals A and B, which drive a directional up- and down-counter, often referred to as a quadrature-encoded pulse counter. The analog bandwidth of the dual-sampling analog-to-digital converter (ADC) needs to be at least equal to the maximum sine/cosine frequency.

It is important that the sinusoidal signals, A and B, and the incremental count, incr, sample and latch simultaneously.

Practically, the digitized signals, ATTL and BTTL, have a phase shift compared to the analog signals. This phase shift is typically due to hysteresis and propagation delay of the comparators and nonideal sampling synchronization. This means that upon each transition to the next quadrant, the incremental counter may not be updated immediately because of phase lag. See the first quadrant in Figure 3. Figure 3: Phase shift of ATTL versus analog signal A due to phase lag

Due to the redundancy between the two least significant bits LSBs of incremental line count, which represent the four quadrants and analog phase, you can apply a correction method as outlined in Table 2 as long as the phase shift (see the red and blue signals in Figure 3) remains less than ±90°.

Since only the phase information is used to identify the quadrant, there are only two exceptions to consider, where the phase doesn’t match to the incremental count. These exceptions occur during the transition from quadrant 4 to quadrant 1, or quadrant 1 to quadrant 4, depending on the rotation direction.

where N is the sin/cos encoder’s line count (number of signal periods per revolution), incr is the actual incremental count, and jA,B is the actual phase of the signals A and B calculated using the inverse-tangent method.

A key analog component with an interface to sin/cos position encoders is the dual ADC. It might be external or embedded into the host processor. The first building block is the dual-analog signal path with 120-Ω termination and EMC protection to connect the sin/cos encoder’s differential signals: A+, A-, B+, B-, R+ and R-.

The second building block is the comparator block, which converts the analog signals A, B and R into digital signals with a 3.3V TTL I/O  to interface to a quadrature-encoder pulse module like the enhanced quadrature encoder pulse (eQEP) module on the Piccolo MCU. The TLV3202 high-speed, low-propagation delay comparators are configured with hysteresis for better noise immunity.

The third building block is the wide-input-range 24V power supply, leveraging the TPS54040A high-efficiency DC/DC converter for an intermediate 6V rail and LDOs for point of load. The LDOs provide the necessary voltages for the signal chain as well as the 5.25V supply voltage for the sin/cos encoder.

The schematics and layout have been designed and tested for EMC immunity according to IEC618000-3, which specifies EMC immunity requirements for adjustable-speed electrical power-drive systems.

If you’re ready to start designing, check out the TI Design Interface to Sin/Cos Encoders with High-Resolution Position Interpolation reference design, which outputs the measured angle from the sin/cos encoder with up to 28-bit resolution through a USB virtual communications port and includes example firmware for the Piccolo MCU. For an example with the Sitara AM437x processor including firmware check out the TI Design Interface to a Sin/Cos Encoder with Sitara™ AM437x Reference Design folder. A reference solution leveraging the C2000 DesignDRIVE Position Manager technology for on-chip interfacing to SIN/COS encoders is also included as part of the TI Design TIDM-SERVODRIVE.

In the next and final installment of this series, my colleagues and I will take a closer look at a universal multi-standard digital interface to absolute-position feedback encoders.