Building automation systems control many functions that improve worker comfort and security in industrial and commercial environments. These functions can become even smarter and more cost-effective through innovations in microcontroller (MCU) technology. To design optimized building automation solutions, it’s important to select the right components to support different functions for these applications. Implementing a dedicated MCU adds flexibility to designs by enabling your system to detect, sense and control various parameters in its environment.

Passive infrared or pyroelectric infrared (PIR) sensors are popular in security systems and motion detection applications. You can choose a variety of different technologies to design PIR solutions into motion detector systems to detect a “hot” object or person passing in front of a sensor. PIR sensors require low power consumption, small components, low noise and high-precision sensing in any environment in order to correctly “see” the infrared radiation of an object or person. Figure 1 illustrates a PIR sensor block diagram. 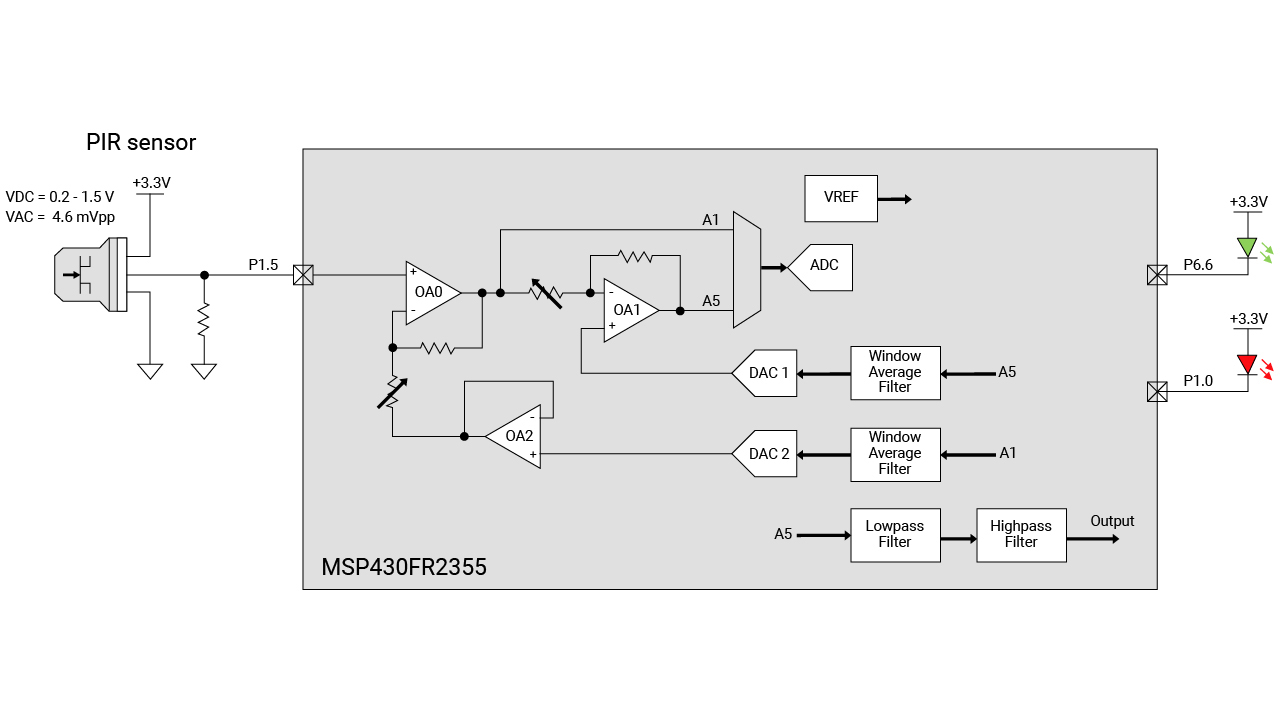 Motion detectors often use analog band-pass filters, although these filters can be more complex to design. The discrete analog approach can be susceptible to noise (through capacitors) and can produce low-frequency noise that is not beneficial for motion detection. The Smart Analog Combo integration in an MCU such as the MSP430FR2355, on the other hand, can provide the PIR sensor’s entire signal chain, and is software-configurable to adjust its sensitivity and range, provide digital feedback loops, and optimize the sensor for low-power performance. Various benefits of an MSP430 MCU-based PIR sensor are shown in Figure 2.

It is not possible to easily adapt both digital analog and digital PIR solutions to change ranges, target speeds, ambient temperatures and lighting conditions. Results from testing at TI show that a PIR motion detector designed with an MSP430 MCU was able to detect motion out to 36 ft (11 m) without analog and digital signal processing.

Digital PIR solutions with an integrated signal chain are simpler to design but can be more expensive. MSP430 MCUs integrate the signal chain into the MCU, which enables low noise, low power consumption (≅6 µA) and a high-performance signal chain for motion-detection applications through the use of the MCU’s low-power modes to maximize battery life. Using fewer components enables a smaller printed circuit board with a simpler layout, and up to 20% bill-of-material savings compared to similar digital PIR solutions.

Sense in all environments: touch keypads

Capacitive touch technology is becoming more commonly used than traditional mechanical keypad buttons in building security panels or residential electronic locks. MSP430 MCUs with CapTIvate technology are often used in these applications to measure changes in the button’s capacitance by a finger’s touch.

A common limitation of touch keypads such as e-locks, especially in an outdoor environment, is touch detection when there is physical interference, such as the user wearing gloves, or moisture build-up on the keypad. One way to overcome this limitation is through piezoelectric sensors, which are made of a crystalline material that generates a voltage when deformed, allowing pressure detection in the keypad.

Using this piezo solution, shown in Figure 3, can help users in day-to-day activities regardless of the environment outside whether it is raining or chilly. The piezo sensors are mounted behind the keypad and measure the force that is applied as the user’s gloved finger is pressing on the keypad. Then, the pressure generates the voltage comparator to the microcontroller and signals a CapTIvate device such as the MSP430FR2676  to increase sensitivity for a short period. 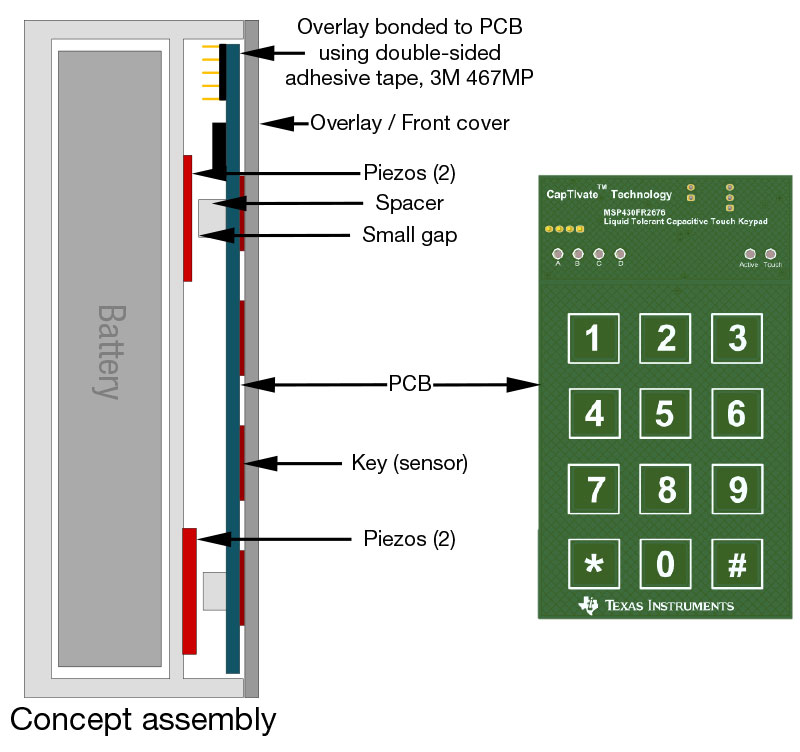 Automated security applications, including Internet Protocol and videoconferencing cameras, need to automatically control tilt, focus and iris. These cameras use an electronic or manual motorized control module to pan, tilt and zoom the camera’s lens. The motor module operates from an external voltage power-supply unit, and an MCU within that unit must communicate with the motor drivers to generate control signals for full operation.

The motor control design shown in Figure 4 uses a dedicated MSP430FR2155 MCU and two DRV8428 stepper motor drivers. The MSP430 MCU controls a variety of functions within the motor, including: 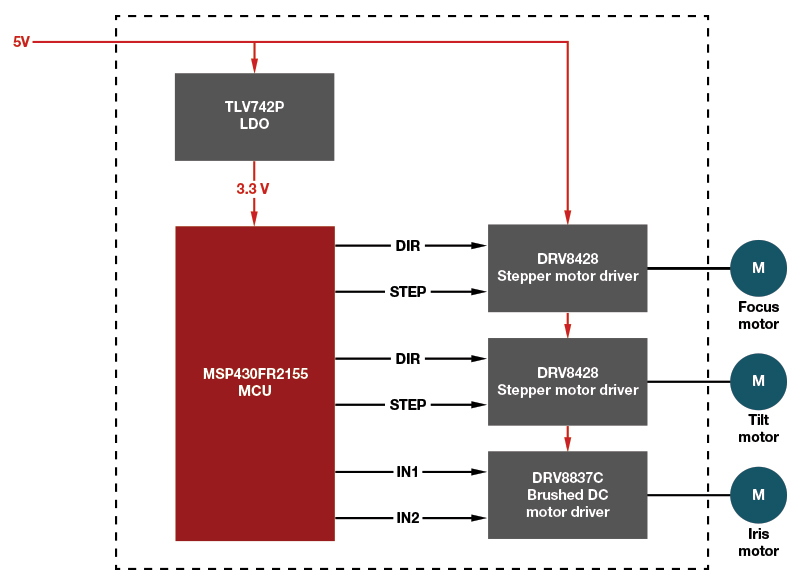 Ready-to-use design resources include a motor module PCB; the application report, “Motor Module Design for IP Network Camera Based on MSP430FR2155”; and software and project collateral.

Using MSP430 MCUs for high-accuracy detection, sensing and control in optimizes building automation performance and increases efficiency. Get started today by diving into our application reports and evaluate with our LaunchPadDevelopment Kits.