Eliminating noise from the factory floor

Industrial automation systems use microprocessors, digital signal processors (DSPs) and a network of sensors to control electromechanical processes. These components are highly sensitive, yet operate in environments filled with electrical noise caused by motor drives, electromagnetic interference (EMI) and a variety of other possible sources.

Electrical noise is often transmitted via the central direct current (DC) power-supply backplane found in factory automation equipment. Isolation transformers can get rid of unwanted noise, but how do you use a transformer on a DC power supply? With a flyback power converter.

An isolated power supply can provide immunity from noise by eliminating ground loops and transient voltages caused by other equipment on the same supply bus. The isolated power supply also protects sensitive components and humans from dangerous high voltages. The flyback converter is a simple design that contains few components, while offering galvanic isolation between the input and output.

The flyback converter is derived from an inverting buck-boost converter, where a coupled inductor or flyback transformer (whose turns ratio multiplies the input voltage) replaces the inductor. Figure 1 shows the basic circuit diagram of a flyback converter. When the MOSFET switch turns on, current begins to flow and the magnetic flux increases in the primary winding, storing energy in the core. Due to the polarity of the transformer, the induced voltage in the secondary is negative, causing the diode to reverse-bias while the output capacitor supplies the load. When the switch turns off, both the current and magnetic flux in the primary winding decrease, inducing a positive voltage in the secondary winding, forward-biasing the diode, and transferring the energy stored in the core to the load. 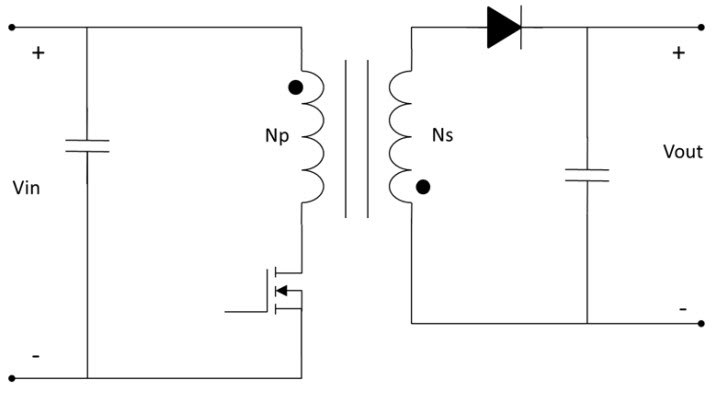 The flyback converter is often used in industrial settings. A typical application would be a programmable logic controller (PLC) input/output (I/O) module powered from a 24V backplane. To ensure reliable performance, an isolated power supply is needed to protect the I/O module from noise. The flyback converter has the added advantage of being able to supply multiple output-voltage rails – both positive and negative – needed for the various processors, field-programmable gate arrays (FPGAs), analog-to-digital converters (ADCs) and amplifiers found inside.

To address the industrial market and demonstrate the use of the flyback converter, TI has released the LM3481 flyback evaluation module (EVM), shown in Figure 2. This design accepts a wide-input voltage range of 5V to 32V and provides a stable isolated output of 12V, capable of supplying 2A of current to the load. This enables designers to evaluate the performance and operation of the LM3481 low-side FET controller in an isolated flyback design. 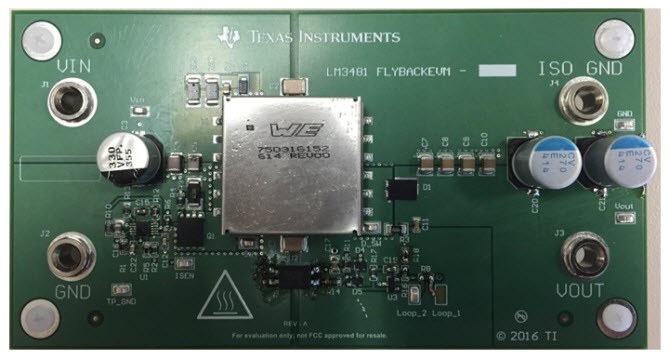 Another critical specification of flyback converters is their ability to achieve good line regulation; in other words, the converter’s ability to deliver a stable output voltage in response to fluctuations in the input voltage. In industrial settings, input-voltage fluctuations may be caused by such things as heavy loads switching on and off, or variable-frequency motor drives. The LM3481 flyback EVM can achieve a ±0.1% line regulation over a wide-input voltage range. Providing a stable output voltage protects critical components and prevents unwanted noise from entering the circuit.

Solving many of the power supply design challenges in industrial applications, the flyback is a simple flexible converter that provides noise immunity and isolation from high voltages. Get started now by purchasing the LM3481 flyback EVM, an efficient well-regulated platform to explore the possibilities of isolated power supplies. Or download a reference design to quickly create a design: