How to protect CAN bus transceivers from ESD and transients

Industrial networks such as controller area network (CAN), RS-485, RS-422, RS-232 and Profibus should be able to withstand harsh system-level transients (from electrostatic discharge [ESD] during handling, interruption of inductive loads, relay contact bounce and/or lightning strikes) in their end applications. Designing to meet these requirements can be challenging without the proper tools and knowledge about the standards that the design requires. In this post, I’ll discuss the International Electrotechnical Commission (IEC) 61000-4-2 ESD standard, an IEC 61000-4-2 ESD test setup and a transient voltage suppressor (TVS) diode circuit that helps protect your CAN transceiver.

The IEC 61000-4-2 ESD immunity test is a system-level ESD test that imitates a charged operator discharging onto an end system. The characteristics of the IEC ESD test differ from that of other ESD standards in rise times, the amount of energy delivered during the strike and the number of strikes administered during testing. Two types of testing methods are involved with the IEC ESD standard: contact discharge and air discharge. The contact ESD test discharges an ESD pulse from an IEC ESD gun directly onto the device under test (DUT). The air ESD discharge test involves moving the charged ESD gun toward the DUT until the air breaks down enough to allow conduction of an ESD strike between the ESD gun and the DUT. IEC ESD testing includes both positive and negative polarities, and a passing score is not possible unless both polarities at a single level survive. Table 1 shows the IEC 61000-4-2 ESD test voltage and peak current levels.

*An open level. Dedicated equipment has to specify the level. You may need special test equipment if higher voltages than those shown are specified.

Figure 1 depicts the basic shape of the IEC ESD pulse and the timing sequence of the test pulses. 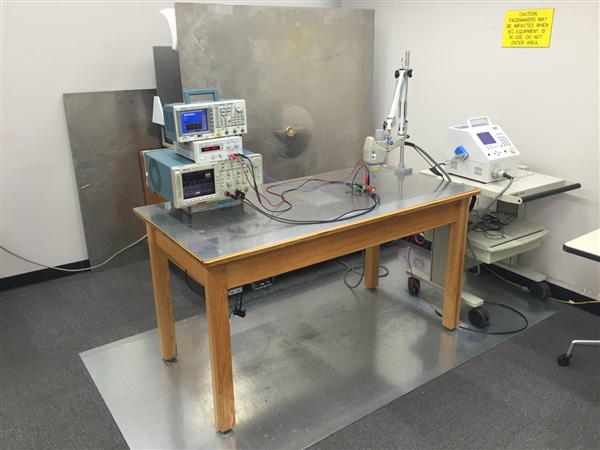 The setup at Texas Instruments is fully compliant to the IEC ESD specification. The metal plate on the floor is connected directly to earth ground and separated from the top metal plane by two series 470kΩ resistors. On top of the upper ground plane is a thin insulator that keeps the DUT separated from the plane. This prevents the creation of a low-impedance path between the DUT and ground, enabling the DUT to absorb the full energy of the ESD strike. Lastly, the IEC ESD generator and gun are at the back right-hand corner of the table, both tied directly to earth ground. The IEC ESD gun has a discharge network made up of a 150pF capacitor and 330Ω resistor, which the standard specifies.

To protect a CAN transceiver against harsh transients such as the IEC 61000-4-2 ESD mentioned above, you can implement TVS diodes on bus lines CANH and CANL. The TVS diode acts as a clamping circuit to redirect any high-energy pulses to ground, away from the transceiver. When selecting a diode, keep in mind that the diode needs to be rated for the type of expected energy levels per the design requirements.

I paired TI’s TCAN1042 and TCAN1051 transceivers with the CDSOT23-SM712 bidirectional TVS diode, which is rated for IEC ESD applications and tested against the IEC ESD specification. Figure 3 shows the TCAN10xx transceiver with TVS diodes implemented, while Tables 2 and 3 show the results from testing. 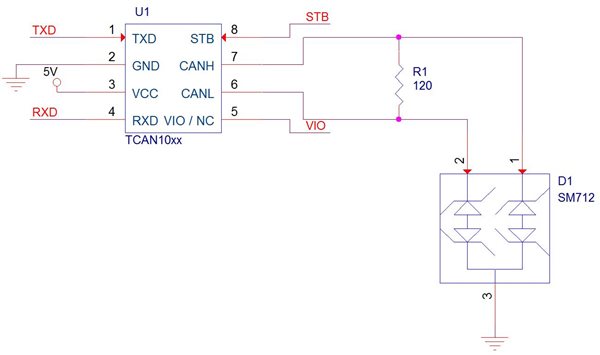 For more information on the TCAN1042 and TCAN1051 with transient protection, please see the TI Designs IEC 61000 ESD, EFT and Surge Protected CAN Reference Design. Leave a comment below if you’d like to hear more about anything discussed in this post, or if there’s an interface topic you’d like to see in the future.