How motor drivers aid in an automobile’s “limp-home” mode

Have you ever had the check engine light come on while you are driving and your vehicle’s operation is limited? This can happen when there is an issue with the transmission; to protect itself, the vehicle might stay in first gear. Or it can happen when a piston is not firing, the vehicle is overheating or the tire pressure is low. Typically your vehicle will give you some indication in the dashboard, as seen in Figure 1.

A vehicle’s limited operation after a system-level fault is called “limp-home” mode. Limp-home mode is a secondary programming feature embedded in the vehicle’s transmission and engine-management computers. These computers monitor and control hundreds of system-level features constantly. When a certain component senses a fault, the computers begin operating that component in a range safe enough to stay below the limits of the fault.

One benefit of engine and transmission systems moving toward electric motors for many actuation needs is that the electric motor can be controlled by the electric control system with more intelligence to support limp-home mode, whereas previously belt-driven actuators constantly ran off of the belt and had no fine control. A good example is the water pump, as seen in Figure 2, which is pivotal in cooling the engine. If there is damage to the electronics driving the water pump, then it is better to drive with much less torque and speed until the pump can be repaired. Obviously, the vehicle won’t be able to go as fast, but it will also not need as much coolant. 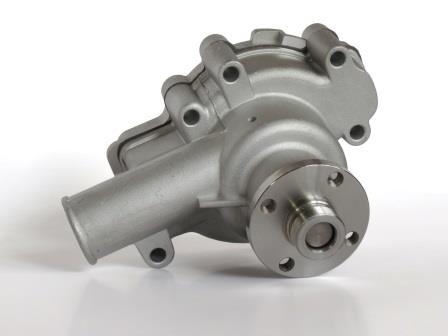 The DRV8305-Q1 offers limp-home mode support by allowing on-the-fly configurability while driving a brushless DC motor. In the water-pump example, if one of the power MOSFETs driving the motor has an overcurrent situation, the DRV8305-Q1 uses flags/warnings through the serial peripheral interface (SPI) port instead of shutting down the driver so that control transfers to the microcontrollers (MCUs). Similarly, implementing slew rate/gate drive current control (IDRIVE) during motor-drive operation reduces switching losses for an overheating system; the side effect of this is reduced motor torque.

As vehicle suppliers push more towards safe and intelligent operating components, it is important for system designers to use the smartest devices. What is your experience designing with brushless DC gate drivers? Sign in and comment below.