Let the loop current flow, but only 4-20mA

The simplicity and robustness of 4-20mA current loops in factory automation and control systems is remarkable. They even deliver power to the field transmitter, which converts the measure and sets the current in the loop from 4-20mA accordingly. An analog input module then measures the current.

A burden with low resistance is preferable for several reasons. From the system point of view, the voltage drop across the input of the module should be as small as possible to maintain the voltage reserve for the rest of the 4-20mA loop. Furthermore, the power dissipation of the burden decreases (P = I2R). This results in less self-heating of the burden and thus enables smaller packages and higher channel density, which is particularly important in multichannel modules. The performance of the input is highly dependent on the absolute accuracy and the temperature drift of the burden. The limitation on the lower end of resistance is the cost for the burden and the resolution of the converter. Modern delta-sigma converters such as the new ADS124S08 offer sufficient performance to cope with the lower voltage drop across the burden without any active signal conditioning in front of the ADC. You can even bypass the built-in programmable gain amplifier (PGA). Figure 1 shows the block diagram of the ADS124S06/8. 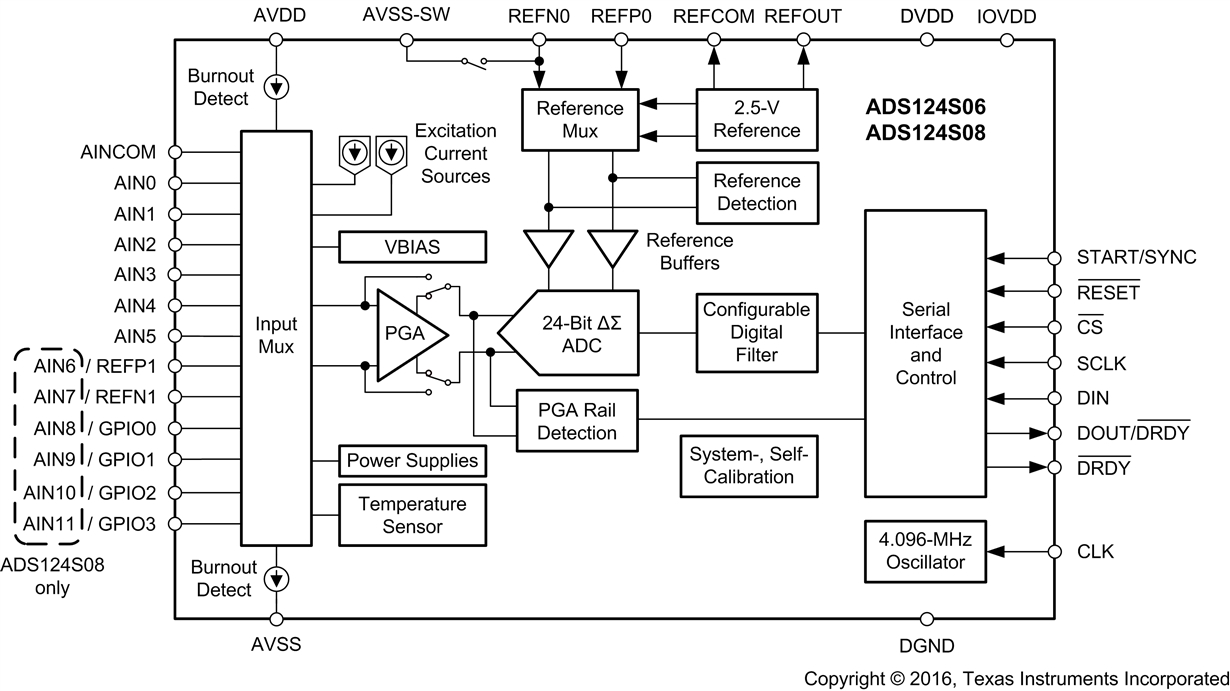 You must take protective measures against surges and miswiring in industrial systems. For short-time/high-energy surges, a bidirectional transient voltage suppressor (TVS) diode placed between the input and ground is a common design technique. This diode conducts above its breakdown voltage and decreases the surge voltage to an acceptable level. However, the breakdown voltage must be higher than the field power-supply voltage, which may be accidentally connected to the input, to avoid permanent and lethal overstress. In this scenario, the current would flow through the burden instead, exceeding its maximum ratings by far. The simplest approach for an overcurrent limiter is a fuse or positive temperature coefficient (PTC) resistor. The PTC will add some resistance during normal operation, though.

You can stack two or more analog current inputs to redundantly measure a critical signal in high-availability and safety-related applications. In this case the analog input module must be a single channel or channel-to-channel isolated module. Even if an analog input module (or isolated channel) faces a power loss or is damaged the 4-20mA loop current must be able to flow unhindered through the burden resistor. Figure 2 shows an example with two independent analog input modules. 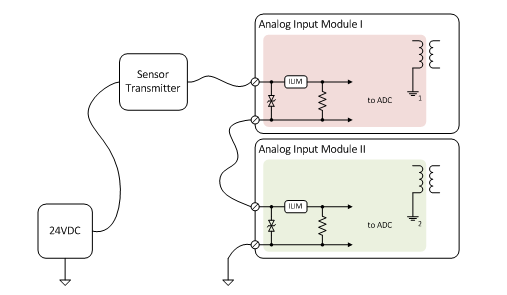 A frequent requirement is the 50/60Hz rejection suppressing the mains frequency ripple reaching the converter. The ADS124S08 integrates this feature in the digital filter after the delta-sigma modulator. If an analog bandwidth of 10Hz is sufficient, a finite-impulse response (FIR)-type filter with a data rate set to 20SPS suppresses both 50Hz and 60Hz simultaneously.

The 4-20mA loop can only transmit a single sensor value at a relatively low bandwidth from the transmitter to the PLC. The Highway Addressable Remote Transducer (HART) protocol is added on top if bidirectional communication with increased speed is required. Outbound data (from the PLC to the sensor transmitter) is voltage-modulated, while inbound data is current-modulated. The HART signal received by the input module is coupled out at the burden resistor and processed separately by a dedicated HART modem or microcontroller.

Apart from measuring the 4-20mA loop current, you must consider other aspects like protection, use cases and the suppression of unwanted frequencies. The TI Designs 4-20mA Analog Input Module Reference Design for Safety Applications and Dual Channel-to-Channel Isolated Universal Analog Input Module for PLC Reference Design include current measurement and can be used as a reference.