I have discussed sensorless motor start-up with our InstaSPIN-FOC™ technology in part one of this series, followed by a discussion of how to generate sufficient torque at start up and maximize it while spinning your motor in part 2. In this third and final part of the series, I’ll explain how to address some challenges in applications that may have highly dynamic loads up to 100 percent or rated torque output.

To truly solve the problem, you need to be able to continuously estimate the rotor flux angle at zero and very low speeds and transition between the low-speed and high-speed observers in a stable manner. A new set of libraries is being provided to make this possible with InstaSPIN-FOC technology. The library is in two parts:

Figure 1. Frequency of operation with FAST and IPD_HFI 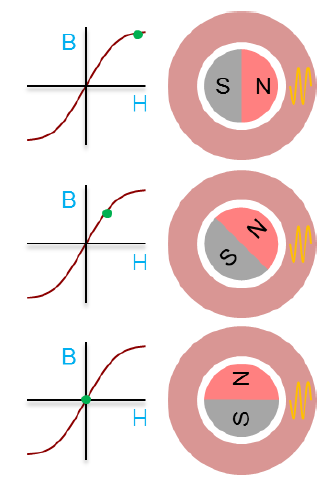 Once the rotor’s north pole is located, for best control system performance it must be tracked at all times during the operation of the motor, even the very short time between start-up and FAST reliably being able to provide valid angle estimations. The IPD_HFI solution uses a high-frequency signal to track the north pole. However, this capability relies on the motor design having a large saliency. Saliency can be introduced by placing the rotor magnets below the surface of the rotor with gaps of the rotor’s iron left in between poles. Contrast this to a non-salient surface mounted design.

For the salient type, because the magnetic material has a much less relative permeability than the surrounding iron, the reluctance difference for flux flowing through the magnet is greater than reluctance of the iron path. As the rotor’s angle advances, the reluctance has a periodic variation. If the inductance is measured on a coil of the stator, it will look something like below:

The HFI algorithm works very well at low speeds but it has a maximum speed limit. Before this maximum speed limit is reached, control has to be handed over to a higher speed observer like FAST. The module that selects between low-speed (HFI) and high-speed (FAST) estimators is the angle frequency select (AFSEL). AFSEL requires angle and frequency inputs from both the low- and high-speed estimators and the speed at which the control is passed from one estimator to the other.

Besides the need for a salient rotor design, one of the key limitations is the effect of the current through the motor on the saliency effect. To start a motor under load, enough current has to be consumed by the motor to produce the needed torque. As the currents increase the reluctance variation is diminished, hence the inductance variation is diminished, and the HFI portion will not estimate the angle location precisely enough to maximize torque production. This must be tested and is highly dependent on the motor design and the initial saliency (variation). More is always better.

An example “Torque Control” implementation has been released as “proj_lab21” starting with MotorWare revision 1.01.00.14

Initially the project is just being released on the DRV8301 Rev D EVM inverter with our C2000™ Piccolo™ F28069 microcontroller. In future revisions of MotorWare™, support will be extended to different combinations of inverters and controllers as well as further system examples such as “Speed Control.” Learn more about InstaSPIN and IPD_HFI at www.ti.com/instaspin.