This article was co-written by Keegan Garcia

According to Forbes, by 2050, the global population of people over the age of 60 is expected to hit 2 billion. To put this into perspective, this will represent over a fifth of the world’s population. With a growing elderly population comes the need for more advanced in-home monitoring, while still allowing people to maintain personal autonomy. According to the U.S. Centers for Disease Control and Prevention, nearly one-fourth of seniors fall every year and falls are the leading cause of trauma-related hospital admissions among older adults, as shown in Figure 1. Fall detection systems can use sensor-driven solutions to provide non-contact, non-privacy invasive sensing through accurate point-cloud data. 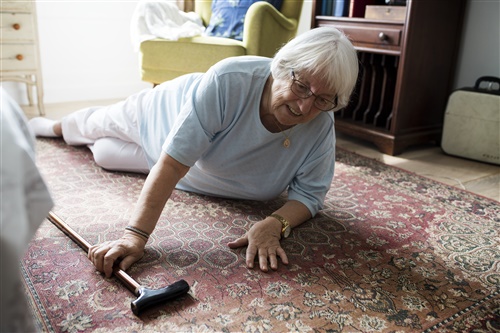 TI’s IWR6843 millimeter wave (mmWave) sensors enable high-accuracy fall detection without the need for contact with the person being monitored. The sensors can detect in all lighting conditions, in addition to sensing through materials, and provide data parameters to the system of range, angle and velocity in a scene by leveraging 3D point-cloud information.

Here we have TI’s “Detecting Human Falls and Stance” demo, which showcases TI’s 60 GHz IWR6843 single-chip sensor and its ability to detect the height and stance of a person when the sensor is mounted on a wall. The IWR6843 is used because the 60GHz band is open worldwide for industrial RF sensing applications

The demo uses the IWR6843ISK-ODS EVM, which has a 120-degree field of view in both azimuth and elevation. In the demo, the EVM is mounted at a height of 6.5ft, and the wide elevation field-of-view helps increase visibility down to the floor and minimizes dead zones. The demo can also be modified to use TI’s IWR6843AOPEVM antenna-on-package EVM.

Figure 2 shows the 3D point-cloud information, which enables the system to analyze the height and stance of an individual through point-cloud shape and color without revealing identifiable information. Notice the differences in the point-cloud outlines in the figure indicating the person’s stance.

Comparing Figure 2c to Figure 2a, you can see that the point-cloud formation changes. A person standing is typically shown with a long, thin cluster while a person lying down is indicated with a short, wide cluster. An algorithm can use this point cloud shape, size, and color information to detect the stance of a person and identify a fall. The sensor can observe the fall whenever there is a sudden negative change in height (the z dimension for this demo) and a sudden change in stance. Stance change could be detected when the z parameter changes from being much greater than x (length) and y (width) to being much less, indicating a quick transition from standing to laying.

Many current elderly alert systems require that users press a button to trigger a response, which is not possible if they are knocked unconscious by a fall. With TI mmWave sensors, a system can detect a potential fall and trigger a response, removing the need for individuals to constantly carry a safety alert button.

When used as the sole technology in a system, TI mmWave sensors allow more flexibility for a system’s physical location in a home or building. Because mmWave technology captures point-cloud data rather than images, an mmWave technology based fall detection system can be used in more sensitive areas such as a home bathroom or bedroom. The sensor can also detect through plastics and drywall, which enables discreet placement and more streamlined household design.

For elderly monitoring systems, high resolution is necessary to differentiate between the stance and height of a person in their normal state. TI’s mmWave sensors output 3D point cloud and velocity information, which can help determine whether a person has fallen.

TI mmWave sensors are an intelligent solution for home monitoring systems that can be used for elderly monitoring and emergency situations. When used in fall detection systems, TI’s IWR6843 enables high accuracy monitoring while maintaining an individual’s privacy and robustness in all environmental conditions, without the need for wearables.