Many motors and pumps are critical in factory production; a functional failure might cause a complete line stop. To avoid this, there are usually extensive preventive maintenance plans in place that require work at regular intervals. These plans are based on lifetime statistics and not on the actual condition of the equipment.

If you know the condition of the equipment, you can reduce maintenance costs as well as the risk of an unexpected breakdown. Using this knowledge to schedule repair and replacement is called predictive maintenance.

The process toward failure

You can understand the condition of equipment because there is a process leading to its final functional failure (as illustrated in Figure 1). Usually, this failure process takes time (for example, think about wear or contamination as a source of failure). 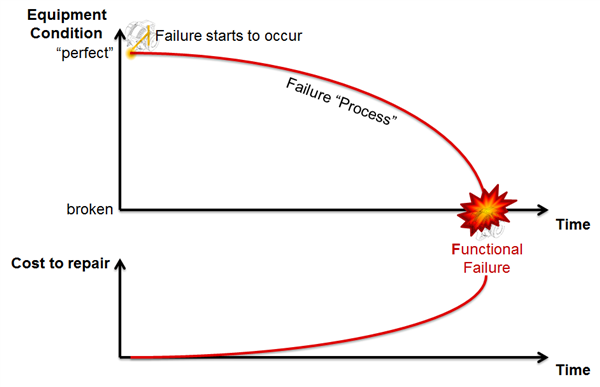 Obviously, the earlier you can detect a potential failure, the more time you have to react, plan and execute equipment maintenance (Figure 2).

The best method would indicate a potential failure as early as possible while keeping the inspection intervals as short as possible; in other words, observing failure indicators continuously.

Changes in vibration are very early indicators for potential failure; in addition, it is simple to measure vibration continuously. The Reference Design for Wireless Condition Monitor for Motors and Pumps Using Multi-Axis Vibration is an example for such a vibration sensor. It uses an analog three-axis accelerometer that is measured by the precision analog-to-digital converter (ADC) in the MSP432P4. The measured data is processed in the sensor node by generating a fast Fourier transformation of it. The resulting frequency-domain data determines changes in the vibration patterns but also reduces the amount of data transmitted wirelessly via Bluetooth® low energy to a gateway, smartphone or tablet.

As shown in Figure 4 on-site operators can use the data from the sensor directly for diagnostics and troubleshooting. In the cloud, you can store the data and perform further analysis on the basis of previously captured data. 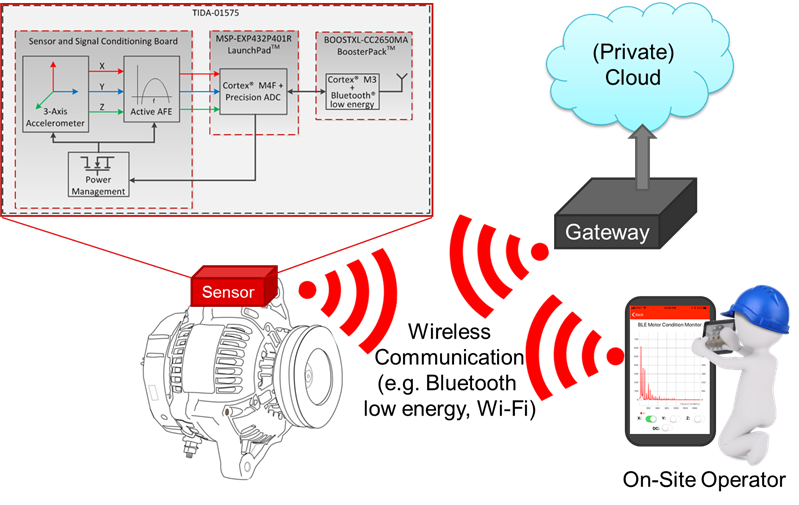 Continuously monitoring the vibration of critical assets like motors and pumps in factories provides an early indication of a potential failure and enables you to plan the maintenance of equipment based on its actual condition, thus saving money. Adding a wireless sensor that pre-processes the data is an easy and low-cost way to add this functionality to motors and pumps.