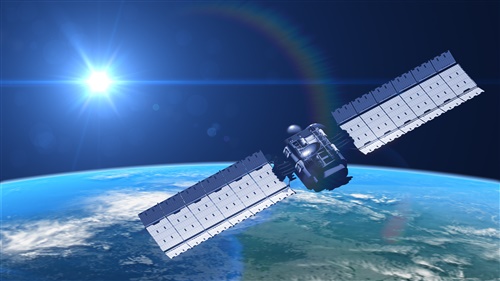 Because satellites on space missions are inaccessible once launched, acquiring accurate telemetry data to monitor the state of health of the satellite sub-systems can help set a baseline to indicate a working system, while fluctuations can indicate failures. Two examples of sensitive components would require accurate monitoring of voltage, temperature and current are the radio-frequency (RF) power amplifiers and thermoelectric coolers. In both applications, performance fluctuates with temperature and radiation effects, and requires adjustments to the applied voltage and current in order to ensure efficient and safe operation. A telemetry circuit monitors critical system power rails and components, gathers performance data (which has value both now and for future satellite designs) and adjusts system settings accordingly.

The most significant blocks of a telemetry circuit (shown in figure 1) are the analog front end (AFE) that senses the power supply rails and temperature, the main processor that analyzes the data and the output signals needed to adjust different system parameters.

An AFE monitors three important values for a telemetry circuit: voltage, current and temperature. In order to measure and interpret these values, an analog to digital converter (ADC) is used to digitize these values and send it to the processor. The ADC128S102QML-SP is a good choice for the AFE as it has 12-bits of resolution and sampling speeds up to 1 MSPS necessary for accurate measurement of voltage, current and temperature (ADC128S102QML-SP has over 10 years of use in space flights) all while having low power consumption of 2.3mW to 10.7mW with a 3 V and 5 V supply respectively. There are, however, other necessary components in front of the ADC to ensure proper operation, depending on which three values the ADC is monitoring.

Voltages in a satellite system can reach up to 40V and include negative voltage rails. These high voltage rails can damage the sensing ADC, thus buffer and attenuation stages are used to scale down the voltage and protect the ADC. A resistor divider will first divide the voltage down to fall within the input range of the ADC. A designer can then use an operational amplifier, like the LMP7704-SP as a buffer to ensure that the signal has enough drive strength. The LMP7704-SP also has good gain bandwidth, of 2.5MHz, and is rail-to-rail on both input and output; which means minimum impact on accuracy while maximizing the full scale range of the ADC. By pairing the resistor divider and the LMP7704-SP, you can take a rail such as a 40-V bias rail, and translate that voltage range to a smaller scale. For example, using a 10-to-1 resistor divider, a 40-V input, would correspond to 4-V output from the buffer.

Current sensing can determine faults on any sensitive power rails and flag the main processor of the power rails that need to be shut off to prevent damaging the field-programmable gate array (FPGA) or data converters. The current data collected can help determine whether devices in the system are drawing more current than expected, indicating a possible radiation-induced latch-up. With its wide bandwidth, the INA901-SP current-sense amplifier can provide accurate current measurements to help set a baseline for the power rails, while also reacting quickly in the event of a sudden failure such as a short circuit.

Temperature measurement of devices or the circuit board can help determine if components are working properly. Overheating can be a key indicator of an FPGA or power module being over stressed, reducing the runtime of the device. Other devices like the RF power amplifier are sensitive to temperature fluctuations and requires proper voltage adjustment to counteract the temperature changes. To measure theses temperatures, the TMP461-SP digital-output temperature sensor can provide both local and remote temperature sensing, monitoring the integrated internal temperature diodes of sensitive devices such as FPGAs and high-speed data converters. In addition to the sensing these diodes, the TMP461-SP also includes an internal sensor that can measure the temperature at its location on the board. Placing the device next to other sensitive components, like a RF power amplifier, enables the TMP461-SP to monitor their temperature.

To process AFE data and control the telemetry circuit in a satellite, there are two options available: an FPGA or a microcontroller (MCU). A typical telemetry circuit uses FPGAs to handle the communication and processing of telemetry data and can almost stand alone, requiring little communication with other parts of the system. FPGAs enable more channel inputs from the AFE, fast data translation, and complex decision-making based on the data input. Most space grade FPGAs have a large package footprint, however, and high-power consumption in an application where minimal size and power are desired.

A mixed-signal MCU such as the MSP430FR5969-SP is a good alternative to help reduce FPGA resources and pins used for telemetry circuits, while providing the same functionality for telemetry circuits such as processing the data, power sequencing, and pulse-width modulation outputs. The MSP430FR5969-SP also features integrated ferroelectric random-access memory (FRAM), a type of memory that tends to be more robust against radiation effects compared to traditional memory types like double-data rate.

After reading the measurements from the system, a telemetry circuit can adjust the different system functions to maintain optimal operation through system recalibration.

If the main processor determines that there is a fault, it can shut off components or toggle their operating mode. For applications that require more precise controls and drive strength, an external digital-to-analog converter like the DAC121S101QML-SP can accurately adjust the bias of system components like RF power amplifiers.

TI’s space portfolio of space-grade analog and embedded processing products provides compact and low-power solutions for telemetry circuits, with the measurement accuracy and performance needed throughout the system to ensure proper operation for the entirety of the mission.