Simplify your power storage design with these Fly-Buck™ power tips 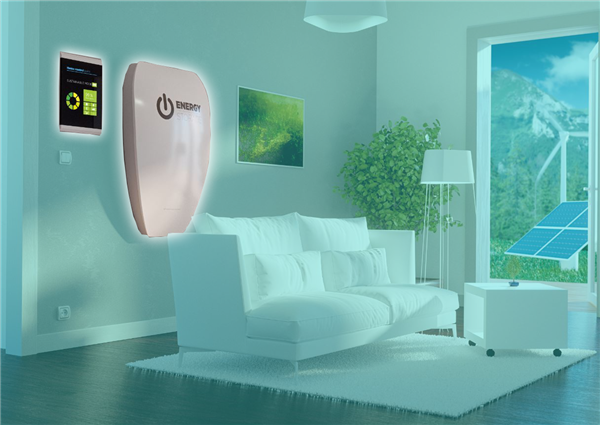 Traditionally, designers have used flyback converters and push-pull drivers with transformers for generating an isolated power supply. The Fly-Buck™ converter (or isolated buck converter) has gained popularity as a low-power isolated bias solution because of its simplicity, ease of implementation and low bill of materials (BOM) cost for uninterruptable power supply (UPS) designers.

The Fly-Buck converter evolved from a synchronous buck converter by adding coupled windings to the inductor for isolated outputs as shown in Figure 1.

Fly-Buck converter results in a simpler solution than a flyback converter at lower power levels because of the integrated field-effect transistors (FETs) and the absence of any external feedback loop. The attractiveness of the topology has been mostly at low power levels (< 15W), where tight regulation on the secondary voltage is not required, such as in power supplies for gate drivers.

The Fly-Buck converter also offers the primary non-isolated buck output at no additional cost. Therefore, it results in a simpler design for applications that require both isolated and non-isolated outputs.

In a Fly-Buck converter, the low-side switch cannot be a diode as it is in a nonsynchronous buck. In a Fly-Buck converter, the primary current flows in the reverse direction during the off time due to the reflected secondary-side current on the primary side and may become negative. The diode in a nonsynchronous buck will block this negative current, which blocks the energy delivery to the secondary. As a result, the isolated output voltage will collapse.

For some synchronous buck-converter integrated circuits (ICs), the low-side FET turns off (for example, in pulse-frequency modulation [PFM] mode) if negative inductor current is detected, thus increasing light-load efficiency. In such cases, the FET emulates the diode behavior, making such buck converters unsuitable for a Fly-Buck converter. However, in some converters you can disable the diode emulation mode so that the converter works in forced pulse-width modulation (PWM) mode. You can use such converters as a Fly-Buck converter. An example of such a converter is TI’s LM5160.

Not all control schemes are fit for Fly-Buck converters. Because the primary-side current in the off time is different than a normal buck, current-mode control relying on low-side FET current or valley-current sensing will not be the right choice for a Fly-Buck converter.

To incorporate overcurrent/short-circuit protection, a synchronous buck IC that has a current limit on the high-side switch is a good choice, since the current waveform in a Fly-Buck converter during its on time is similar to a normal buck converter. The primary current flows in the reverse during the off time due to the reflected secondary-side current on the primary side and can become negative. For ICs that have only a valley detection control circuit, where the switch current is monitored during the off state, the overcurrent situation may not be detected (see Figure 2). Such a situation may damage the IC.

You should choose the peak current limit based on the design requirements, especially considering a situation where the primary side is not loaded and the secondary side is shorted. Some ICs also have negative overcurrent protection (when the converter sinks current through its low-side FET) that detects voltage across the low-side metal-oxide semiconductor field-effect transistor (MOSFET) and allows the control circuit to turn off the low-side MOSFET if the reverse current exceeds the negative current limit. An example of such a converter is TI’s TPS55010.

The LM25017 is a good fit for a Fly-Buck converter, as it operates in continuous conduction mode (CCM) regardless of the output loading. The device has constant on-time (COT) control, which is not affected by the current waveform, current-limit protection in the high-side (buck switch) FET, and an adaptive current limit off-timer. 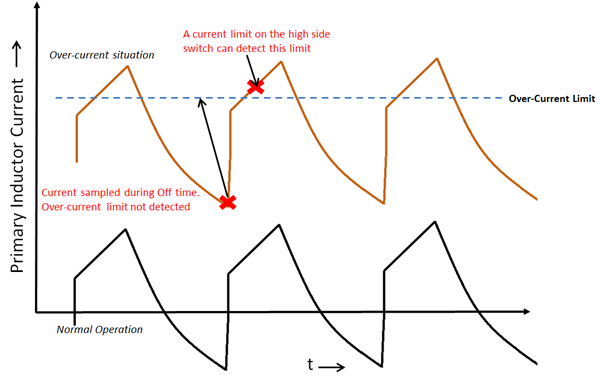