A new breed of highly integrated, ultra-low-power microcontrollers (MCUs) with completely configurable ferroelectric random access memory (FRAM) and a super-sensitive analog front-end for interfacing to advanced sensors is part of the shift in building automation that is pushing more and more intelligence out into every corner of office buildings, factories, apartment complexes or just about any building that’s being automated.

These mighty mites of the MCU world give developers a flexible and reconfigurable base on which they can build a wide range of intelligent end nodes that team up with sensors, microprocessors, centralized control systems and other types of building automation system components. 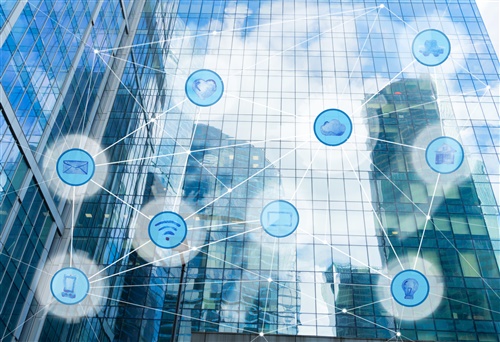 Smart thermostats offer a good example of the design advantages of these new MCUs in building automation applications. The first smart thermostats were the next step up from programmable devices. Instead of requiring users to program in a schedule of temperature changes for a day or week, smart thermostats ‘learn’ from users as they change the temperature setting and then anticipate those changes automatically. In addition, many smart thermostats interface to wireless communications technologies like Wi-Fi® or Bluetooth® low energy so users can check the status of the thermostat, change its settings or monitor its operations from a smartphone or a centralized control system with wireless connectivity.

Of course, the increased integration of these new MCUs helps reduce power consumption and some of these devices, like the MSP430FR2311 MCU, feature an analog front-end that includes standard op amps and a transimpedance amplifier (TIA) with the industry’s lowest power leakage of just 50 picoAmps (pA) and a standby power rating of just one microAmp. A sensor subsystem based on such a MCU could run on a battery for as long as 10 years. If the MCU is integrated with a digitally controlled oscillator, it will be able to wake up from a low-power standby mode and move into an active mode in less than 10 microseconds. FRAM memory is also a low-power storage media. It is non-volatile like Flash, but features fast and low-power writes, write endurance of 1,015 cycles, enhanced security that makes it less vulnerable to attackers than Flash or EEPROM, and unmatched configuration flexibility.

The capabilities of the MSP430FR2311 MCU device make it appropriate for smart thermostat applications and other building automation devices like occupancy sensors, smoke or gas detectors, wireless power switches and others.