In the final installment of this six-part smart sensing series, I would like to discuss a conceptual ultrasonic sonar system that employs a pulse-compression technique to improve target-range accuracy and range resolution.

Because sonar’s operating bandwidth and transmitting power are severely limited in the real world, pulse compression is a technique that helps overcome these limitations. In pulse compression, a specific phase or frequency pattern modulates the transmitted pulse during a wider pulse interval. The receiver uses a pulse-matched filter to correlate the reflected signal with the pattern of the outgoing signals to compress the received signal into narrow pulse and reject noise and other signals. Since the transmitted pulse is wider, a lower peak-power output transmitter can deliver the same amount of transmitted pulse energy to maintain range accuracy performance. The compressed narrow pulse also enables a finer range resolution. 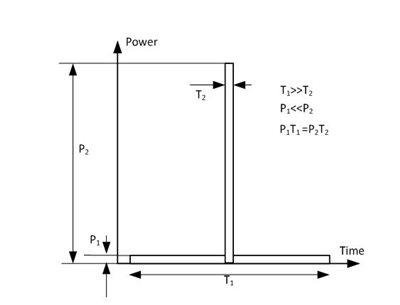 One popular form of pulse-compression modulation is the linear frequency sweep, or chirp. Figure 3 illustrates the waveform of a chirp pulse. 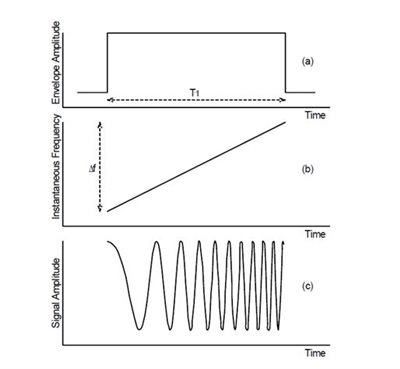 In Figure 3, T1 is the duration of the FM pulse. In the top graph, the power of the chirp is kept constant. In the middle graph, the frequency is swept by Df during chirping. In the bottom graph, the chirp signal is in the time domain. Figure 4 is a simplified block diagram of an FM chirp sonar.

Figure 4: A simplified block diagram of an FM chirp sonar

In Figure 4, the pulse-matched filter in the receiving path is a correlation operator to produce a narrow output pulse only when the received signal contains the exact frequency chirp pattern in the transmit pulse. In this way, the wide transmitted pulse effectively compresses to a narrow pulse at the output of the correlator, as shown in Figure 5. 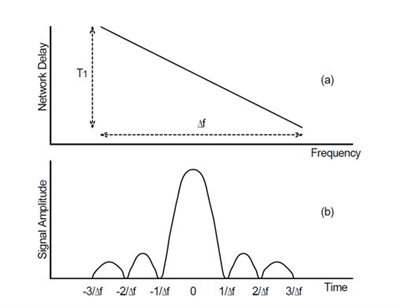 The signal-to-noise-ratio gain, known as the pulse-compression ratio, is the product of the bandwidth of the frequency sweep and the transmitted pulse width. The compressed pulse width is the inverse of the chirp bandwidth.

In Figure 6, the input time-domain signal is converted to the frequency domain and multiplied by the complex conjugate of the spectrum of the reference FM chirp. The product is then converted to the time domain. In sonar applications, the length of the input data is often much larger than the duration of the transmitted chirp. This frequency-domain operation needs to be performed on overlapped input data blocks.

Robot applications and target classification applications use FM chirp sonar for its enhanced signal-to-noise ratio of the target’s return signal and its ability to detect multiple targets. Researchers have also been able to use FM chirp sonar echo to find information about the geometric structure of a target’s surface. Other researchers established range-orientation and amplitude-orientation profiles for recognizing leafy plants and human faces. Fish finders and moving aids for blind people have also used FM chirp sonar.

Figure 7 illustrates an FM chirp sonar implementation using the TI MSP430FR5994 microcontroller (MCU). To generate the FM chirp pulse for transmission, a time-domain reference table is saved in the MSP430FR5994 MCU’s ferroelectric random access memory (FRAM). A timer is set up to toggle an input/output (I/O) pin when the timer period expires to generate the excitation signal to the transmitter. The timer also generates a request upon expiration for direct memory access (DMA) to load a new period value from the FRAM reference table. Figure 8 shows the resulting excitation signal for the FM chirp. 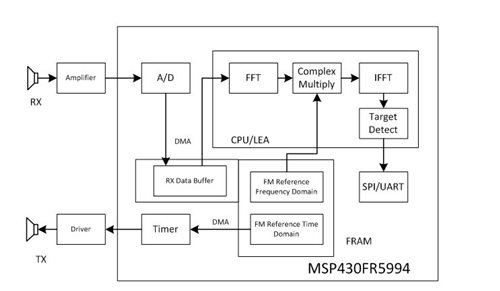 For this conceptual FM sonar, let’s set the duration of the FM chirp pulse to 2.56ms. The transmitter sweeps from 50kHz to 100kHz. The bandwidth of the sweep is 50kHz. The signal-to-noise-ratio gain is 75 (bandwidth-pulsewidth product, 50kHz times 2.56ms). The sound speed in the air is about 340 meters per second. The target-range resolution of the system is about 6.8mm. The analog-to-digital converter (ADC) on the MSP430FR5994 will run at 200KSPS to correctly sample the time-domain input up to 100kHz. The chirp can be repeated every 100ms.

The maximum DOF for the system is about 30ms for a 5meters maximum target range. To cover this range, the receive data will collect a total of 7,000 samples for about 35ms after the transmission chirp starts. Since the low energy accelerator (LEA) module’s RAM is not large enough for this amount of data, the “overlap-and-save” method needs to be used for processing in the frequency domain.

The first step to set up the matched filter is to create an FM frequency reference table. Sampling the 2.56ms FM chirp at 200KSPS results in a 512-point array. The next steps are to expand the array to 1,024 points by zero padding, take FFT of the expanded array and save the complex conjugate of the FFT output as the FM reference table.

The overlap-and-save method is a method to calculate correlation on large size of data using FFT. First, the large data block is divided into overlapped sub-blocks with 50% overlapping. In this conceptual system, the size of the sub-block is 1024 pts.  To start processing, put 512 zeros in the first half of the 1,024-point buffer and the first 512 input data in the second half. Do a 1,024-point FFT, complex multiply FFT output with the reference table, and do inverse FFT on the result array of the multiplication. Only save the first half of the inverse FFT results to the output buffer. Now, move the first 512 input samples to the first half of the buffer and next 512 samples to the second half of the buffer.. Repeat this procedure 13 times to process all of the received samples.

If there is a target in range, you should see a compressed pulse in the inverse FFT output buffer. The “constant false-alarm rate” is a widely used technique for target detection. This technique involves estimating a noise level from a processed signal and setting the detection threshold to be proportional to the noise level. Since the LEA handles the matched filtering, most of the CPU time can be devoted to target detection from the matched filter output.

While this final installment discussed the basic operating principles of FM chirp sonar and a conceptual implementation with TI’s MSP430FR5994 MCU, there are still a lot of details to work out for a real sonar system. The basic requirement is that the ultrasonic transducer needs to support a wide bandwidth.

You can find more information about the MSP430FR5994 MCU, FM chirp sonar and pulse compression in the Additional Resources section. The pictures in Figures 3, 5 and 6 are extracted from the article, “Use FPGA resources to boost radar system performance.”

This blog completes this blog series of smart sensing. The MSP430 MCU with the LEA math coprocessor opens many digital processing opportunities in ultra-low power applications. I am looking forward to feedbacks from readers and hope to provide more useful information in the future.