How to select the right industrial Ethernet standard: Sercos III

This new blog series is for designers who have decided to leverage industrial Ethernet in their system. I’ll talk about several common industrial Ethernet communication protocols. This should help you to better select the best standard for your application.

There are more than 20 industrial Ethernet protocols deployed as standards and used in industrial applications: these include EtherCAT, Sercos III, PROFINET, EtherNet/IP and Ethernet Powerlink. Why are there so many standards to choose from? Each manufacturer of industrial equipment seem to know the requirements for real-time data exchange over Ethernet a little bit better and has developed their own standard based on their knowledge about the historical serial fieldbus area.

You cannot implement most industrial Ethernet standards with a standard Ethernet media access control (MAC); they require a dedicated application-specific integrated circuit (ASIC) or field-programmable gate array (FPGA). This is because the Ethernet frame is received on the fly, also named as cut-through, which means that while the frame is getting received on the first Ethernet port, the frame is already getting processed and transmitted onto the second Ethernet port by a dedicated industrial Ethernet MAC hardware block. With the cut-through method a port-to-port delay of less than 1µs is achieved for an Ethernet frame.

On the other side standard Ethernet MAC uses the store and forward method. First the complete Ethernet frame must be received before secondly any processing or forwarding of the frame can be done by the Ethernet MAC. This adds jitter and delay to the frame and therefore it’s not a good choice for manufactures of industrial equipment.

Sercos has been around for 25 years in factory automation applications for mechanical engineering and construction. Sercos III is the third generation, established in 2003. This efficient and deterministic communication protocol merges the real-time data exchange of the Sercos interface with Ethernet. Sercos III technology integration was until now implemented in FPGAs.

One Sercos III master controls multiple Sercos III slave devices such as drives, sensors, and analog and digital I/O devices – this is shown in Figure 1. One master can control as many as 511 slaves.

The communication protocol is time-multiplexed, which is shown in Figure 2. Within one Sercos III communication cycle is a time slice dedicated to real-time Sercos III frames called real-time (RT) channel. In this time slice, the master and slave exchange process data, which is used within the programmable logic controller (PLC). In the second time slice, known as unified communication channel (UCC), all devices (master and slaves) in the network can exchange standard Internet protocol (IP) telegrams. UCC is used to exchange information of a Web server, update device software with trivial file transfer protocol (TFTP), or transfer Ethernet frames for any kind of IP-based applications.

The use of an FPGA for Sercos III adds cost and board space. An alternative solution to remove that cost adder is to use PRU-ICSS, a peripheral available in many TI Sitara™ processors. For example, TI provides PRU-ICSS firmware for the AM335x processor, enabling a Sercos III slave device without the use of an external FPGA. You can evaluate the solution with the TMDSICE3359 evaluation board as seen in Figure 3. 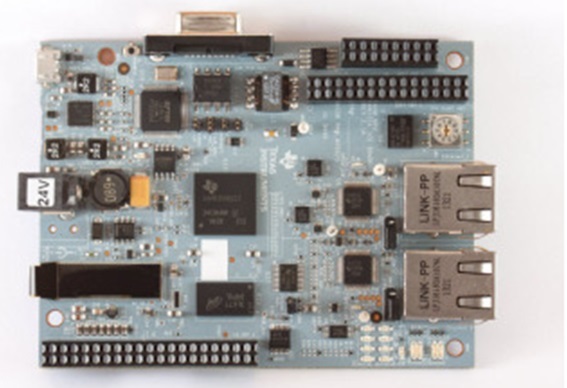