Lithium thionyl chloride (LiSOCI2) batteries are popular in smart flow meters because they provide higher energy density and a better cost-per-wattage ratio than battery chemistries such as lithium manganese dioxide (LiMnO2). One disadvantage of LiSOCl2 batteries is poor response to peak loads, which can result in a decrease of the usable battery capacity. So in this article, we’ll describe an effective method to decouple peak loads from the battery, in the range of a few hundred milliamperes, that can help increase battery life.

Maximizing the usable battery capacity is important because it enables the system design to support:

The overall effect minimizes battery and maintenance costs, as well as development costs, by enabling more reuse of a single flow meter design across more kinds of flow meters

A successful meter design needs to sustain a long operational time (>15 years) while enabling functionalities such as valve control, data recording and data transmission. Extending battery life is an effective way to increase meter operational time. If you connect the battery to the load directly without any power buffer in between, however, the meter’s complex load profile may deteriorate the battery’s lifetime performance.

Based on the current level, you can divide the load consumption profile of a standard meter into standby mode, middle-stage mode and active mode. Each mode influences battery life differently:

Table 1 demonstrates the Saft LS33600 battery’s capacity derating vs. nominal capacity of 17 Ah at different load and temperature conditions. At an operating temperature of +20°C, a 200-mA load current leads to a 42% capacity degradation. Therefore, the battery should never directly supply the load. Only by employing a low-leakage power buffer can you limit the peak current to less than 10 mA.

Table 1: Characteristics of capacity vs. current for the LS33600 from Saft Batteries 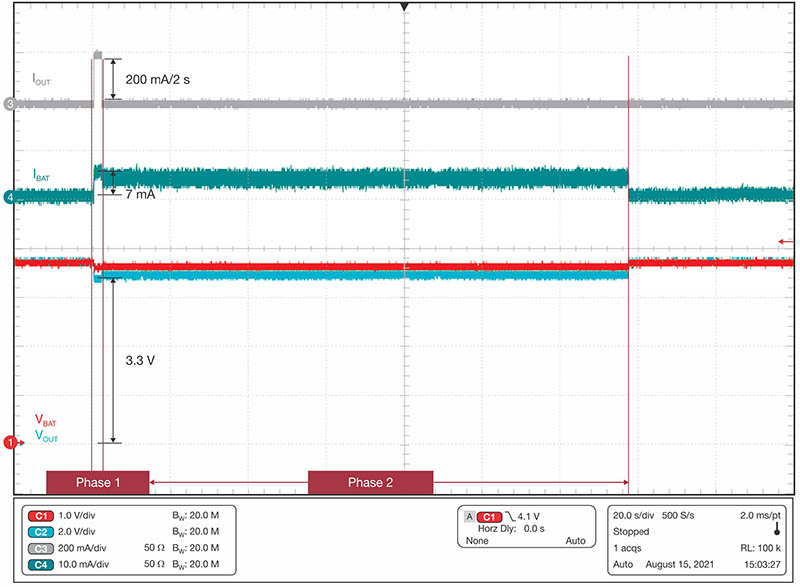 where ŋ is average efficiency of the converter.

Comparing results between Equations 2 and 3, the TPS61094 solution has double the available energy of the HLC and EDLC solutions. This means more energy can be delivered to loads, and lowers the peak current drawn from the battery under extreme conditions. For example, if there is a 200-mA load at 3.3 V to drive a valve, an HLC or EDLC solution can only support the load for 2.8 s. The TPS61094 buck/boost converter with an integrated supercapacitor can support the load for as long as 7.8 s, assuming that the power buffer supplies all of the load.

The complex load-consumption profile of flow meters requires a power buffer to help extend LiSOCl2 battery life. With excellent efficiency over wide operating conditions, the TPS61094 is a good choice to remove lifetime extension challenges. By limiting the peak current drawn from the battery, this buck/boost converter maximizes its capacity and raises the supercapacitor’s available energy, enabling the system to operate longer in low-temperature conditions than an HLC or EDLC solution.