Radiated electromagnetic interference (EMI) from switching power supplies is dynamic and situational problem that relates to circuit board layout, component placement and parasitic effects within the power supply itself, as well as the overall system in which it operates. As such, the issue is quite challenging from the system designer’s perspective, and an understanding of radiated EMI measurement requirements, frequency ranges and applicable limits is important.

Having reviewed the relevant standards for conducted EMI in part 1, part 2 of this Power House blog post series provides an overview of radiated EMI standards. Table 1 from part 1 provides a list of relevant abbreviations that are applicable here as well.

Assessing EMI performance in automotive applications is an issue of increasing concern for end-system designers involved in automotive design and testing. Tracking all possible interactions that might result in a radiated EMI problem is a challenge, particularly given the relatively small volume within a vehicle’s wiring harness characterized by densely packed arrangements of power and signal runs.

Figure 1: UNECE Regulation 10 radiated EMI limits for vehicles at 10m (a); ESAs/components at 1m (b)

R10.05 refers extensively to CISPR 12 and CISPR 25, which are international standards containing limits and procedures for the measurement of radio disturbances to protect off-board and on-board receivers, respectively. CISPR 12 protects radio reception away from the vehicle and is a whole vehicle test rather than applying to subassemblies or components, whereas CISPR 25 protects radio reception in the vehicle and therefore has limit classes defined in bands for various radio services. It includes both module/component emissions measurements, as well as whole vehicle emissions tests using the antenna provided with the vehicle.

Figure 2 shows the Class 5 radiated emission limits using peak (PK) and AVG detectors for components/modules measured over a frequency range of 150kHz to 2.5GHz in a shielded enclosure. Measurements are pertinent to receivers within the vehicle operating in the broadcast and mobile service bands.

Table 1 shows the antenna recommendations for various frequency ranges and the required measurement polarization. The biconical and log-periodic antenna overlap in frequency capability, whereas a broadband antenna covers the cumulative of their frequency ranges.

Figure 3 provides CISPR 11 radiated limits for Group 1 equipment. Class A equipment is for use in all establishments other than domestic and is measured on a test site or in situ; Class B covers domestic and is measured only on a test site. I encourage you to review CISPR 11 to understand the unique specification limits and test setups for the various equipment groups and classes. 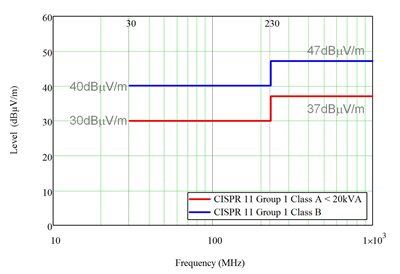 For an antenna measurement distance of 3m, Figure 4a plots the Class A and Class B limit lines when using a QPK detector for frequencies below 1GHz. Figure 4b plots the equivalent limits above 1GHz using an AVG detector. In addition, the measuring receiver bandwidth (RBW) is set at 120kHz and 1MHz, respectively, for frequencies below and above 1GHz. Class B limits for residential or domestic applications are lower by 6dB to 10dB than Class A limits for commercial use.

Radiated EMI is an increasingly challenging topic for power converters with high dv/dt and di/dt switching waveforms. Numerous governing bodies regulate the permissible levels of radiated emissions generated by an end product, and an understanding of the EMI standards pertaining to the application is essential.