Multichannel power-up and power-down sequencing has become a necessity in many power-supply systems. As the complexity of these systems increase, engineers must design for tighter timing specifications, power down in the reverse sequence, and handle a greater number of power rails.

The LM3880/LM3881 simple power-supply sequencer offers a simple and precise method to control the power-up and power-down sequencing of three independent power supplies – although with the complexity of power-supply systems today, three-channel sequencing may not be enough. So for systems that require sequencing more rails, you can cascade two LM3880/LM3881 devices for six-channel power sequencing. In this blog post, I’ll discuss how to cascade these devices for this application.

The LM3880 is typically used for power-up and power-down sequencing of three power supplies and provides a very simple solution with precise timing capability over a wide temperature range. This is especially important when the reverse sequence is required during power down, a requirement found in many microprocessors and field-programmable gate arrays (FPGAs). Figure 1 shows an example use of the LM3880 to correctly power-sequence the VCORE, VIO and VAUX rails of an FPGA in the correct order, both during power up and power down.

Figure 2 shows the timing diagram during power up and power down. In this example, the three FPGA supplies will be enabled starting with VCORE with 30ms of time in-between, and powered down in the reverse order, starting with VAUX. What engineers often overlook is that the reverse power-down order is just as important as the power-up order to prevent spurious current paths, for example, through internal P-N junctions of an FPGA. Therefore, proper sequencing will increase the longevity of the end product and improve product reliability.

What about applications that require more than three rails? Is there a simple way to sequence these systems? Thankfully, there is! You can cascade two LM3880 integrated circuits (ICs) to enable six-channel power-up and power-down sequencing with only an external AND gate and OR gate. Figure 3 shows a simplified example of this, with the pull-up resistors omitted for simplicity. 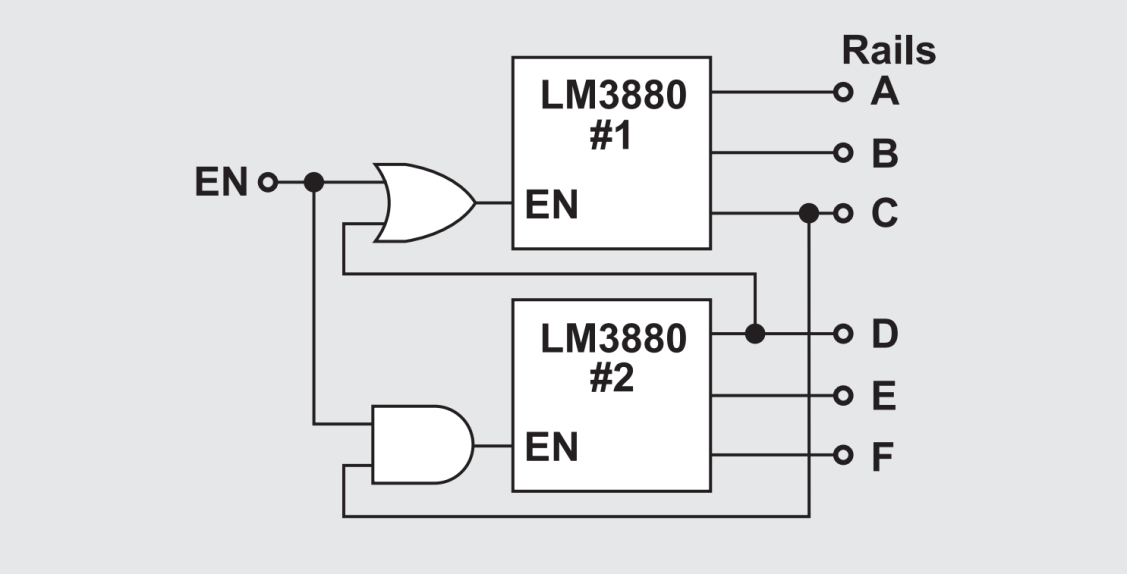 How does the cascading scheme work?

When deciding on the AND gate and OR gate, here are some key considerations:

For the reasons I’ve mentioned, the LM3880 simple power-supply sequencer provides an easy-to-use and accurate solution to sequence up to six power-supply rails. With today’s very tight timing requirements and the need for reverse power-down sequencing, there is no simpler solution.