The UCD9090A is an upgrade to the former UCD9090 (listed as not recommended for new designs [NRND]). In this post, I will explain the differences between the two devices, including their operation and features, and how to migrate from the UCD9090 to the UCD9090A.  Table 1 lists the features included with the new UCD9090A.

What is a fault pin?

What is the GPI fault response?

This feature solves the issue of limited Analog Monitor (AMON) pins. For example, in the UCD9090, when all 10 rails are assigned to a voltage monitor; the system does not have the capability to monitor one more external event (e.g., OVER_TEMP) or one more rail. With the GPI fault response feature in place, the external event or POWER_GOOD of the point of load (POL) could connect to the assigned GPI. When the signal changes to de-asserted, the UCD9090A can help shut down the rails and retry and re-sequence the system based on how the GPI fault-response is configured.

What is GPI debugging?

To avoid triggering the PMBus alert, response fault or continue system watchdog during board-level debug or programming, a GPI pin can be assigned to perform a GPI debugging function on the UCD9090A. When asserting the assigned GPI, the device is under the GPI debug mode. The device will not activate the PMBus alert pin for any faults/warnings nor respond to any fault response. It will not log any faults, will suspend system watchdog and ignore the sequencing dependencies for rails.

What is the LGPO sequencing on/off dependency?

What is the rail state?

Each device has up to nine states: INIT, IDLE, SEQ_ON, TON_DELAY, RAMP_UP, REGULATED, SEQ_OFF, TOFF_DELAY and RAMP_DOWN. The state of the rail can help you easily determine the status of the system so that you can more easily bring up or debug the power system. Figure 2 shows how the rail states are changed. 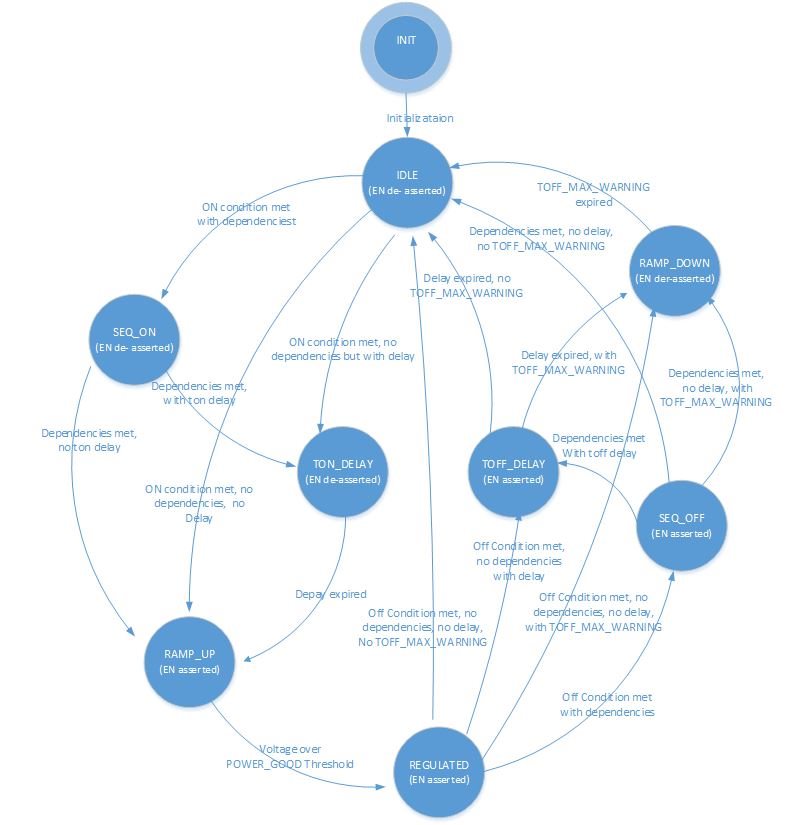 What is cold boot mode?

Cold boot is a feature specifically designed for cold-temperature applications like telecom. It has the intelligence to heat up a system by turning on the cold boot rails for certain amounts of time when it is experiencing extremely cold temperatures. The UCD9090A device communicates with the system through a particular GPI called the thermal-state GPI, which is a digital output from a thermal sensing device. The cold boot feature is fully configurable, enabling you to select enable/disable, the number of cold boot rails and the timeout period. Figure 3 is a pseudo processing call of how cold-boot is handled by the device.

Will TI continue to offer the UCD9090?

Having these new features makes the UCD9090A a better candidate over the UCD9090 for various applications, but note that TI will continue supporting and building the UCD9090 until it reaches ten consecutive years of no sales.

The UCD9090 and UCD9090A are pin-to-pin compatible devices. The UCD9090A supports all features of the UCD9090. Moving to the UCD9090A does not require any schematic changes. Moreover, you can seamlessly import the project file (.xml) file generated from the UCD9090 into the UCD9090A with TI’s Fusion Digital Power Designer TM GUI to help reduce the migration effort.

3. Once you have successfully imported the project, use the export function from the Fusion Digital Power Designer GUI to regenerate the .csv/.hex file. See Figure 5.

4. Use the .csv/.hex file generated from step No. 3 for any programming utilities.

Hopefully this blog post provides you with a good comparison between the two devices and will help you migrate from the UCD9090 to the UCD9090A. If you have any additional questions, please post a response below or submit through TI’s E2E™ Community Sequencers forum.