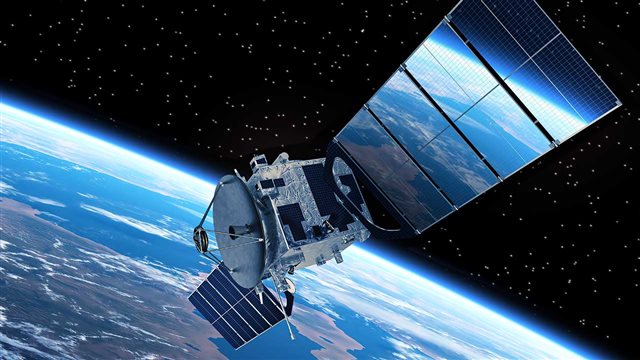 Satellite power design has a complex set of trade-offs given that the design has more variables, and the number of semiconductor options are significantly smaller than those in commercial applications. A satellite’s primary power supply is especially important, since if it fails, there’s little to no opportunity for repair. And with the advancement of space-grade high-performance field-programmable gate arrays, satellites now have significantly higher local computing power, increasing overall power demands.

When developing any satellite electrical power system (EPS), two of the most important trade-offs are the overall thermal design and the mission profile radiation requirements.

A satellite’s EPS must step down the voltages from the energy generation solar array portion of the system (typically 100 V ±50%) to the battery storage portion (typically 28 V ±20%), and then again to the clean point-of-load power supply (<5 V) for satellite payload cards such as single board computers, instrumentation or communication cards, or radar or communication cards. At each of these conversion stages, achieving the highest possible efficiency will help reduce power losses, as space power losses have far wider overall system and weight implications.

One technique to improve efficiency is synchronous rectification, where replacing a conventional power diode with a gate-controlled transistor significantly reduces the conduction loss of the power path. The forward characteristic of diodes, particularly those suitable for handling the current targeted by newer SMPS designs, often results in a larger voltage drop during the on-state. On the other hand, the synchronous rectification transistor is typically a field-effect transistor with a low on-state resistance, leading to much lower conduction losses at the same current level.

Because all flight hardware needs to understand the orbit of the satellite and its expected radiation exposure, it is not possible to select satellite devices without reviewing the mission radiation requirements.

Satellite electronics will experience three types of radiation effects while in orbit:

It’s important to validate how a component will perform when exposed to these types of radiation, especially components in the power supply. The TPS7H5001-SP device family includes TID radiation reports up to 100 krad(Si) and NDD up to 1 × 1013 neutrons/cm2, ensuring that the device passes each of the automatic test equipment test vectors post-radiation exposure that device manufacturers use to guarantee underlying data-sheet limits. For the TPS7H5001-SP SEE testing, destructive SEE testing for SEL, SEB and SEGR immunity is confirmed to a linear energy transfer (LET) equal to 75 MeV-cm2/mg, with SET and SEFI characterized to a LET equal to 75 MeV-cm2/mg.

The TPS7H5005-SEP device family includes TID radiation reports up to 50 krad(Si) and NDD up to 1 × 1013 neutrons/cm2 with destructive SEE testing for SEL, SEB and SEGR immunity is confirmed to a linear energy transfer (LET) equal to 43 MeV-cm2/mg, with SET and SEFI characterized to a LET equal to 43 MeV-cm2/mg.

Supporting the latest high-performance computing solutions in today’s smaller satellites focuses a lot of attention on the thermal design challenges of the system. The new TPS7H5001-SP and TPS7H5005-SEP PWM controller families allow designers to achieve maximum power efficiency and design flexibility. To address the ever-present radiation requirements these two families of devices also have detailed radiation reports for TID, SEE and NDD that highlight how they can support any type of orbit or mission, be it low earth orbit, medium earth orbit or a geostationary orbit.