For athletes to perform at their highest level – to run a mile in less than five minutes or leap into the air and dunk a basketball – they need strong muscles. The heart supplies blood through the veins to the muscles to enable movements such as gripping an object with your hand or moving a finger when your brain instructs it to. But without muscles, these spectacular feats would not possible.

Similarly, factory floors use a 24-VDC power network to distribute power from power supplies (the heart) through wires and connectors (the veins) to different power switches (the muscles), enabling the movement of relays, actuators and sensors when the programmable logic controller (the brain) tells them to do so. This is evident in large machine tools that use power switches to internally transfer 24 V of power – from board to board, or externally in digital output and remote input/output modules – to distribute power to relays, actuators and sensors. These power switches enable robots, motor drives and other large machine tools to automate a factory to perform tasks at a high speed and with precision – much like the athletes we love to watch. Figure 1 is a visual representation of a factory illustrating the use of power switches in different types of factory automation equipment. 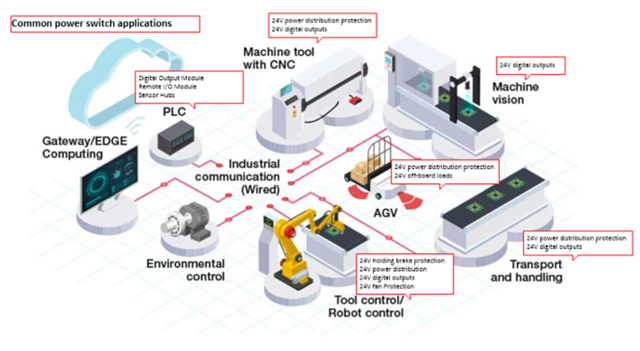 So what type of semiconductor devices act as the muscles in a factory environment? Industrial high-side switches from TI go beyond just distributing power and drive output loads – they also provide protection and diagnostic capabilities to prevent extended factory downtimes. For example, the switches include features such as:

One of the most important protections is current limiting, which helps keep factory automation systems with board-to-board connections and offboard loads from experiencing significant downtime due to short-circuits, which could be caused by condensation/humidity, wire breaks or short-to-ground scenarios. TI’s high-side switches also have the option for an external resistor to adjust the current limit, offering added flexibility. This flexibility makes it possible to use the same switch across a variety of output load conditions. There is no need to buy an additional device; simply change an external resistor to get a new current-limit value. Figure 2 is a block diagram of a dual-channel high-side switch with independent adjustable current limits for each of its output channels. 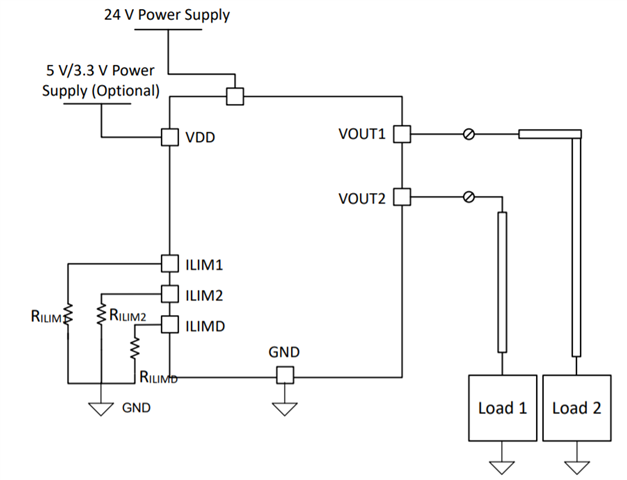 Integrated current sensing offers the ability to sense the amount of current flowing through the high-side switch, which can be invaluable when debugging a machine that’s not working properly.

The switches output a current onto an external resistor that is proportional to the current passing through the internal power metal-oxide semiconductor field-effect transistor, which can then be fed to an analog-to-digital converter (ADC) in the system for processing.

Current sensing enables users to diagnose open-load situations if a wire were to break or become unplugged in a machine. This can greatly reduce debugging time for large machines that have many outputs or board-to-board connections by enabling technicians to better pinpoint which system may have the broken or missing wire, and get the system up and running again.

Additionally, current sensing can help determine whether a system is experiencing an overcurrent event or drawing an unexpected amount of current. This can alert technicians to bring a spare load or subsystem to replace the faulty one.

Providing feedback to the system that a certain load has turned on correctly is another benefit of current sensing. There are loads, such as a solenoid actuator, which have a very distinct input current profile. A typical current profile for a solenoid actuator is shown in Figure 3 below and has three components to it; a stall current, a notch current and a holding current. This profile can be captured by the high-side switches current sensing and sent to an ADC for analysis. This analysis can help to provide a feedback mechanism to the system, indicating that the load it’s powering did indeed turn on correctly and the system is running as expected. 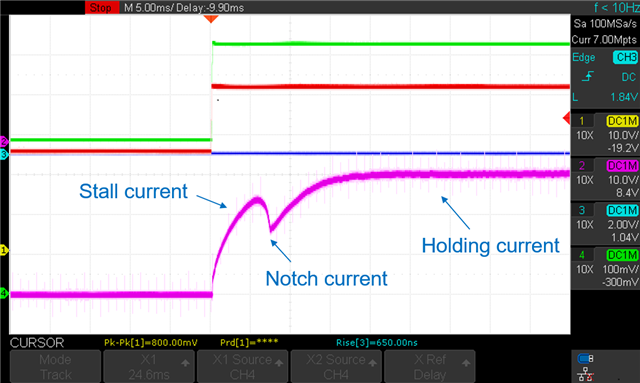