Pump it up with charge pumps – Part 1

Life was simple when I first became interested in electronics. Components were so big I could solder them without a microscope. Switching converters switched at a whopping 25 kHz, digital circuits all used a 5-V supply voltage and all the computers I came across used the RS-232 serial interface to communicate.

The RS-232 standard specifies that a logic 0 is represented by voltages between 5 V and 25 V, and a logic 1 by voltages between –5 V and –25 V. My problem was that although almost all the components on my boards needed only a 5-V supply, I still had to generate those two extra rails for my RS-232 interface.

Then I came across the MAX232. This device was an inspired product, combining two line drivers, two line receivers, and a positive and negative charge pump. With that bad boy running off a single 5-V supply, I could generate the additional supply voltages I needed and transmit and receive serial data.

Charge pumps are useful little DC/DC converters that use a capacitor to store energy instead of an inductor. They can be found in dedicated charge-pump devices such as the LM2775/LM2776 devices, as auxiliary rails in LCD bias supplies such as the TPS65150, or as external circuits put together from a couple of diodes and a couple of capacitors.

Figure 1 is a simplified circuit diagram of an unregulated charge pump. The charge pump operates in two phases: 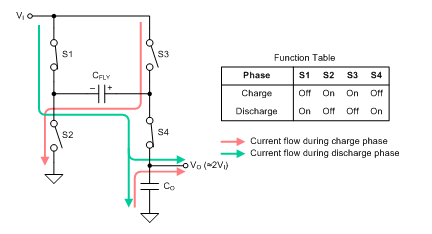 The circuit just described works well, but its output voltage is unregulated. Such a simple circuit is sufficient is some applications, but a charge pump with a regulated output is much more useful.

Note that a simple, regulated voltage doubler can only regulate its output voltage in the range of VI to 2VI. It cannot generate output voltages lower than VI. There are some fancy tricks you can do to make a buck-boost charge pump, but these kinds of devices are more complicated than the one shown in Figure 3.