With the variety of regulators on the market, it can be difficult to choose a DC/DC regulator. Most automotive applications require high efficiency over the entire load range since they’re running from the battery. But then again, many industrial applications require good efficiency at high loads and efficiency at light loads is not very important. Understanding the losses in a DC/DC regulator is therefore important. Reading the efficiency curves in DC/DC converter data sheets also generates a few questions, such as “Why is the efficiency at light loads low?” and “Why does the efficiency dip at heavy loads?” In this blog series, I will attempt to deconstruct system efficiency into different component losses using the SIMPLE SWITCHER® LM2673 3A step-down voltage regulator as an example.

In a typical nonsynchronous buck regulator such as the LM2673, the power-dissipating components are the IC itself, the inductor and the catch diode. The root-mean-square (RMS) currents through the input and output capacitors and the parasitic equivalent series resistance (ESR) are very low; thus you can ignore the losses in those components. 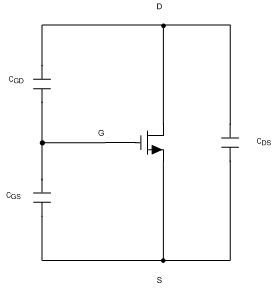 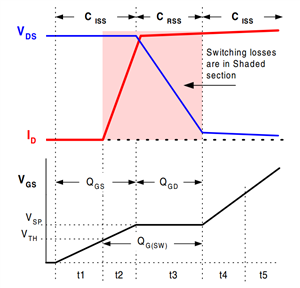 The MOSFET drivers provide the current (ICC) which you can estimate using Equation 1:

Where, FSW is the switching frequency of the DC/DC regulator.

For a converter like the LM2673, which has an integrated high-side MOSFET, the data sheet doesn’t list parameters like QG. Therefore, you’ll need to estimate the ICC in a different way: on the lab bench. With the device enabled and the load disconnected, measure the input current. Without a connected load, this input current measurement is essentially the ICC current measurement. The current ICC is also called the operating quiescent current. Please refer to the link in the ‘Additional Resources’ section to learn more.

For more accurate calculations, you can use TI’s WEBENCH® Power Designer software. WEBENCH Power Designer has information on all internal MOSFET parameters and therefore can take those into consideration while calculating losses.

As you can see from equation 1, the current is directly proportional to the switching frequency (FSW). Since the MOSFET driver is providing this current, there are losses in the driver. The driver voltage (VCC) is set by the internal low-dropout regulator (LDO). The losses in the driver are expressed as shown in Equation 2:

If you add up Equations 2 and 3, you’ll get the total power dissipation of the LDO and the driver (Equation 4):

In the next installment of this series, I’ll explain how the gate charge is related to the switching losses in the MOSFET, how the light load efficiency is dependent on these losses, and how the total losses affect the conduction losses and overall efficiency of a DC/DC regulator.