As I mentioned in my last blog, a cascode MOSFET configuration provides a low-cost alternative for high-voltage applications such as smart meters and motor drives. To further understand how a cascode MOSFET configuration works in high-voltage converters, Figure 1 shows a MOSFET modeled by a switch in parallel with a diode and a capacitor,. In addition to the switch, diode and paralleled capacitor, you must also consider the gate-to-source capacitance, Cg, of the top-side MOSFET.

In this blog post, I will discuss two possible operational conditions when using a cascode MOSFET configuration: Vin < VZc and Vin ≥ VZc, where VZc is the clamping voltage of the Zener diode ZC. 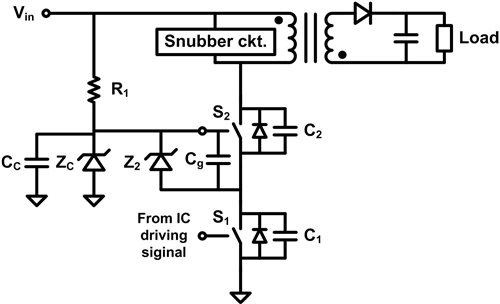 When the converter first powers up, capacitor CC will be charged to Vin through R1. Once the controller bias voltage is charged above the undervoltage lockout (UVLO) threshold, switch S1 turns on. As shown in Figure 2, when S1 turns on, the energy in CC transfers to Cg and leads to voltage increases on Cg. In order to turn on S2, the clamping voltage of Z2 needs to be set higher than the gate-to-source threshold voltage (Vgs(th)) of the top-side MOSFET. It is important to have enough energy in Cg to keep the top-side MOSFET turned on during the entire on state after the bottom-side MOSFET turns on. In other words, CC can’t be too small. Sometimes, the parasitic capacitance of ZC might not be enough and will require an external capacitor in parallel with ZC. 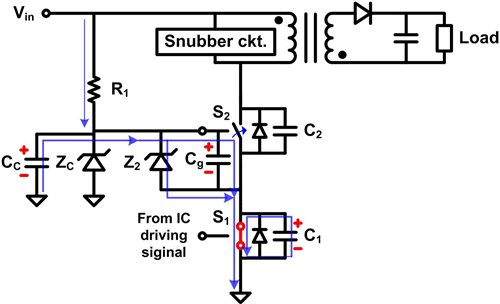 When the MOSFET on the bottom side turns off (Figure 3), the current from the transformer quickly charges C1. Cg discharges and energy goes back to CC again. Once Cg discharges to a voltage level lower than Vgs(th), S2 turns off and C2 charges up. 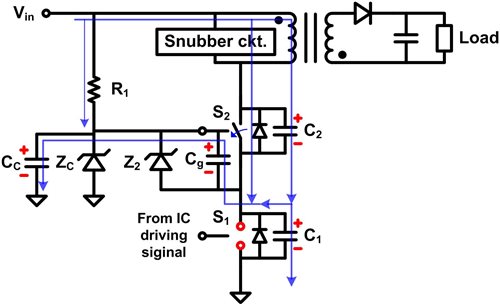 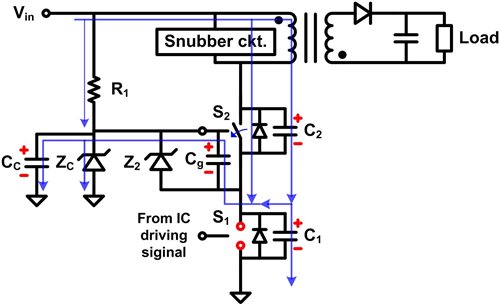 The longer turn-off delay time S2 has after S1 has already turned off, the higher current flows through S2 to ZC, which might lead to a thermal issue for ZC. Figure 5 below shows a turn-off transient example. As you can see, S2 is starting to turn off after S1 is fully turned off. In the transient, S1 is already off and S2 is turning on. A surge current flows through ZC and this causes a thermal issue with Zener diode ZC. 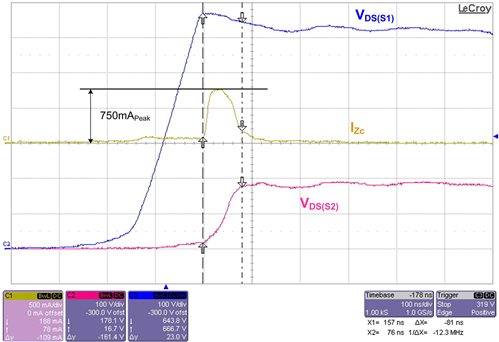 If the turn-off delay time between S1 and S2 can be minimized by using MOSFETs with better transient characteristics (like the example in Figure 6), the current going to ZC can also be minimized, and reducing  the temperature rise of ZC. 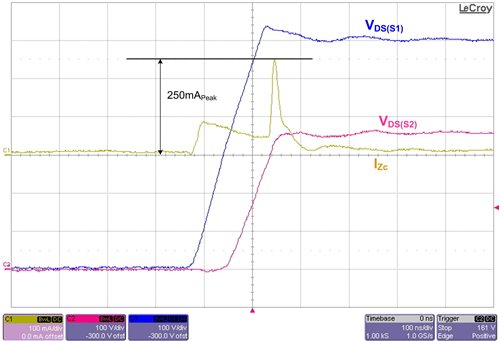 Many components go into designing high voltage converters with a cascode MOSFET configuration, but mastering the key operations with carefully circuit parameter selection allows for a low cost alternative for high-voltage applications.