Advanced automotive headlights require dynamic lighting functionality to achieve road-safety-enhancing features like adaptive driving beam and adaptive front lighting systems. These features use LED matrix managers (LMMs) to perform dynamic brightness changes on individual LED pixels. The LED current of a headlight with normal brightness ranges from 350 mA to above 1 A. For such kind of current level, the board size built with traditional devices tend to be big. The trend of headlight is moving for more channels of dynamic lighting functions, there is a need to have a high-power-density DC/DC buck LED driver that supports dynamic load operations for further miniaturization of headlight driver systems.

Let’s review the electronic control unit (ECU) requirements for dynamic headlights implemented with LMMs. Because the LED stack or total string voltage changes dynamically with different road environments, it’s best if the current-providing LED drivers use the smallest possible capacitors. From [1], a boost-into-hysteretic buck architecture is the most optimal choice for ECUs. A buck converter provides a continuous output current to the LED in order to minimize the output capacitances, as shown in Figure 1. 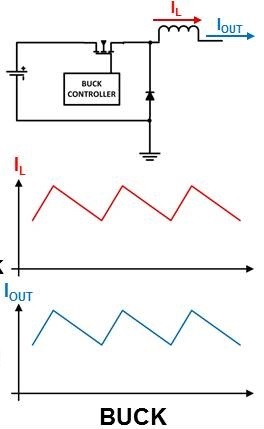 A hysteretic control method best supports the dynamic brightness changes of LEDs, as shown in Figure 2. 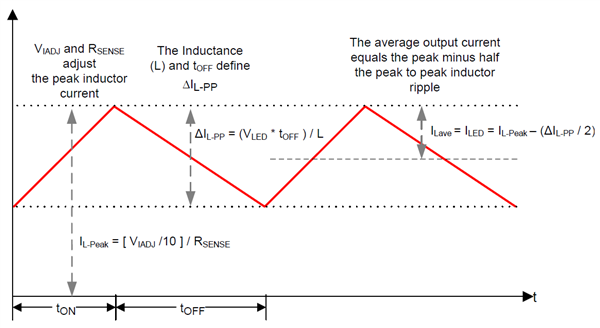 The nature of hysteretic operation is that the switching frequency will change according to the ratio of the output voltage and input voltage, as shown in Figures 3 and 4, respectively. 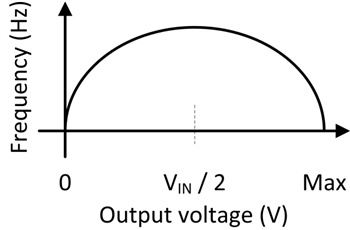 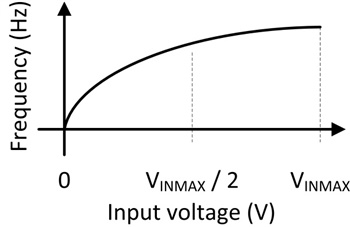 Figures 5 and 6 are conceptual block diagrams of a constant on-time-controlled LED driver and the inductor current waveform. 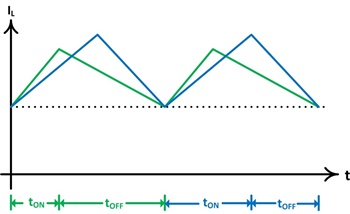 Since the on time is controlled according to the VIN and VOUT ratio, the duty cycle changes with a defined valley current limit. Therefore, the switching frequency is kept nearly constant, as shown in Figure 6.

A typical headlight ECU has an average of six to eight channels of output for different light uses: high beam, low beam, daytime running lights, position lights, turn indicators, fog lamps and so on. Figure 7 is a typical block diagram of an ECU. The total output power for such an ECU ranges from 60 W to 120 W. These specifications necessitate a small-sized yet efficient ECU solution – one that can fit in a tight spot within the car body without generating too much heat. 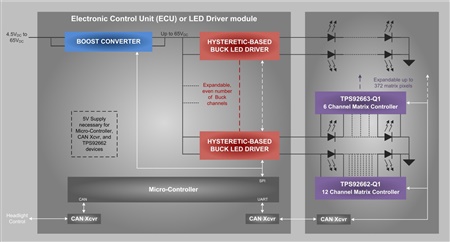 Integrating all four N-channel MOSFETs in the device not only saves space, but also improves power-conversion efficiency because MOSFETs provide a lower turn-on drain-to-source resistance (RDSON). More importantly, the device operates at above 1.8 MHz and reduces the physical size of the inductors. With two buck channels in one package, the number of devices to implement the ECU is half the number of channels; for example, three devices for six channels and four devices for eight channels.